30 years on: Lessons from the Past, Challenges of the Present, Inspiration for the Future

On 14-15 May the Romanian Ministry of Foreign Affairs, in partnership with the European Endowment for Democracy, Aspen Institute Romania and German Marshall Fund of the United States, organized the conference “30 years on: Lessons from the Past, Challenges of the Present, Inspiration for the Future”. The two-day event was held under the auspices of the Romanian EU Council Presidency. 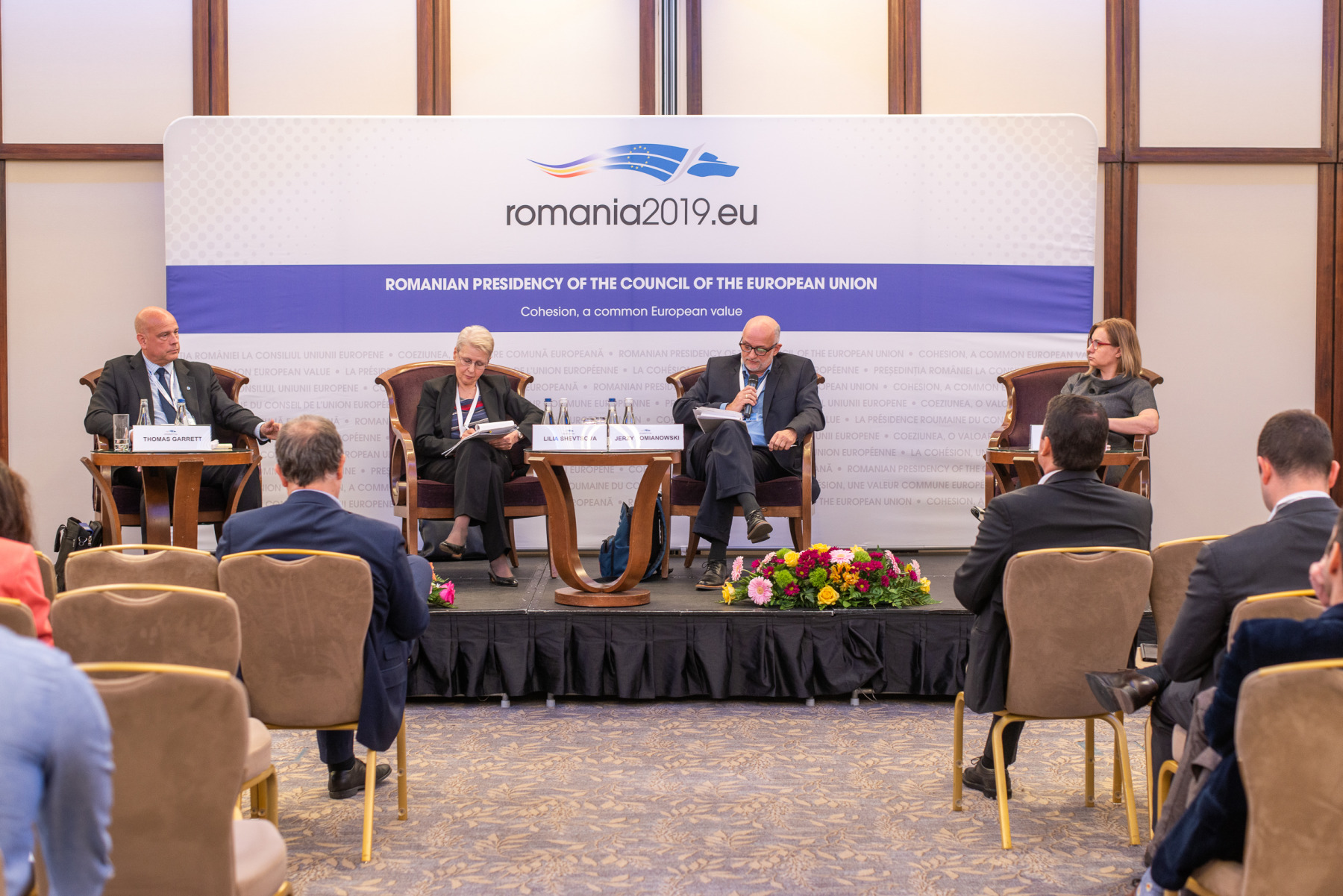 A special high-level session of the conference was dedicated to the 30th anniversary of the fall of communism in Central and Eastern Europe. This session provided a platform for speakers like former Romanian President Emil Constantinescu to discuss lessons learned from the transition processes in the countries of this region and to identify ways in which similar energies could be generated to strengthen the case for a European future of the Western Balkan region.

Leonard Orban, Romanian presidential counsellor, kicked off the second day of the conference with his reflections on the recent Sibiu informal European Council where EU leaders discussed the EU’s strategic agenda for 2019-2024 and conveyed a message of unity. This was followed by a session on the prospects for the Western Balkans, where Romanian State Secretary Victor Micula, highlighted the strong connections between the Black Sea and Western Balkan regions and the many recent positive developments. He urged the EU to “keep enlargement policy alive.”

The conference continued with the plenary session ‘Whither democracy?’ Democracy support experts Jerzy Pomianowski, EED Executive Director, and Thomas Garrett, Community of Democracies Secretary General, discussed internal and external threats to democracy, as well as the importance of democratic resilience in the face of hybrid threats. Pomianowski underlined that democracy support needs to win the hearts and minds of people, and this can only be achieved by local activists who know the local context. He also recommended to focus on the long-term process rather than on short-term results, as democracy takes time. Chatham House Associate Fellow, Lilia Shevtsova, complemented the session with her interesting analysis on the mindset of the Russian people, which while supporting President Putin also disapproves of his activities.

During the afternoon three parallel workshops co-organised by EED examined relevant topics such as grassroots activism, digital society and media.

Workshop I: Grassroots leadership for democracy

EED partner from Armenia, Avnik Melikian, noted that last year’s revolution did not happen overnight, but was the culmination of years of cooperation between the political opposition and civil society activists, involving also the new prime minister himself. Armenians had been withdrawing from politics for years resulting in a lack of pluralism. Her own organisation, Political Dialogue, tries to strengthen Armenia´s democratic processes and citizens’ representation; it also performs a watchdog function to ensure that the political parties deliver on their electoral promises. Another example for grassroots activism is Tbilisi Solidarity Network, an alternative trade union that mobilises people on labour rights, as part of a wider mission to advance democracy across Georgia. One of the group’s members, Sofia Japaridze, explained that as a first step they educate people about their rights. The also work to mobilise people to speak up and become active themselves, because, “when you are subservient at the workplace you are subservient everywhere.” The workshop was moderated by Carnegie Senior Fellow, Richard Youngs, and other speakers were Mariam Tsitsikashvili, Georgia’s Reforms Associates (GRASS), and Vlada Ciobanu from Primaria MEA (Moldova). EED partner Dobrica Veselinovic of Ne davimo Beograd summarised the workshop’s key findings as follows:

Changes in both the speed and access to communication have fundamentally altered our public space in recent years, for better or for worse. In, Synergy and Trade-offs, Tamara Chergoleishvili of Tabula Media (Georgia), journalist Sokol Shameti (Albania), Alexandru Platon of IPP Moldova and Bohdan Maslych of GURT (Ukraine) examined what can be done to improve the positive role social media can play in participation, inclusiveness and in strengthening democracy, while at the same time working on ways to manage and to minimise the harmful effects of social media on our democracies and civic trust. Moderated by Thomas Garrett, Secretary General of Community of Democracies, the session also provided space to discuss the responsibilities of governments, technological giants and civil society. Tamara Chergoleishvili focused on the consequences of polarization in Georgia, saying that, “society is really vibrant - but trust in mainstream media is extremely low.” In her intervention, she nevertheless provided a positive outlook, “People have always been spreading lies - what is stopping us from spreading the truth?” Other participants pointed out that social media is a perfect tool for spreading fake news as there is no responsibility, no obligations. One audience member commented, “disinformation is not new – it just has a new channel to spread it”.

Workshop III The role of media in the post-truth era

This workshop was moderated by EED Executive Committee Vice chair Pavol Demeš, who asked speakers to report on the latest media trends in their respective countries. Natalia Morari of TV8 described how the Moldovan government has many creative ways to undermine the work of independent journalists, ranging from politicians buying up previously independent media outlets, to not making meeting space available for events, and even to blackmailing journalists with alleged sex tapes. One very worrying trend is that in the post-truth era, journalists’ ethics are changing, and that pro-government journalists publicly attack independent journalists. She underlined that TV8 respects the rules of unbiased journalism, where each journalist is free to express his/her opinion. “We are not merely journalists, we are doing advocacy for Moldovan democracy,” she said.

According to Batuhan Ersun, in Turkey there are no free television channels left. Instead, independent journalists stream their work through Youtube, Facebook and other social media. “Nobody in Turkey reads newspapers any more, people turn to the internet for their main source of information,” he said, noting that this is also partially due to Turkey’s large young population. Batuhan works for On Watch Association, a leading actor in the Turkish fact-checking scene. Their project “Ring of truth” is Turkey’s first and only political fact-checking initiative and has been recognized as a reliable source of information since 2014. Through one single video, fact-checking the statement of the government’s candidate for mayor of Istanbul, the organisation reached nearly 2 million viewers on Facebook alone. Ersun reported that almost every day a young person offers to do volunteer work with them. The other workshop speakers included Arzu Geybullayeva, an analyst and blogger from Azerbaijan and Ivan Radev from the Association of European Journalists.

During the final session Jerzy Pomianowski and Mircea Geoană from Aspen Institute Romania discussed how to communicate with and convince those that are not interested in democracy. Pomianowski compared the current trends to a “competition of ideas”, where populists are louder and more engaged than liberals, who are largely passive and hesitant to sacrifice their comfort for activism. He encouraged the actors of fledgling democracies to get involved and contribute to their countries’ European aspirations. “Grassroot movements are drivers for change – we need more of them,” he concluded.

Relive the event with our photo album: