Vilne Radio: reporting from the Donbass

A regional radio station in war-torn east Ukraine is a unique independent voice reporting on local and national news and on the challenges of daily life in Donbas region. 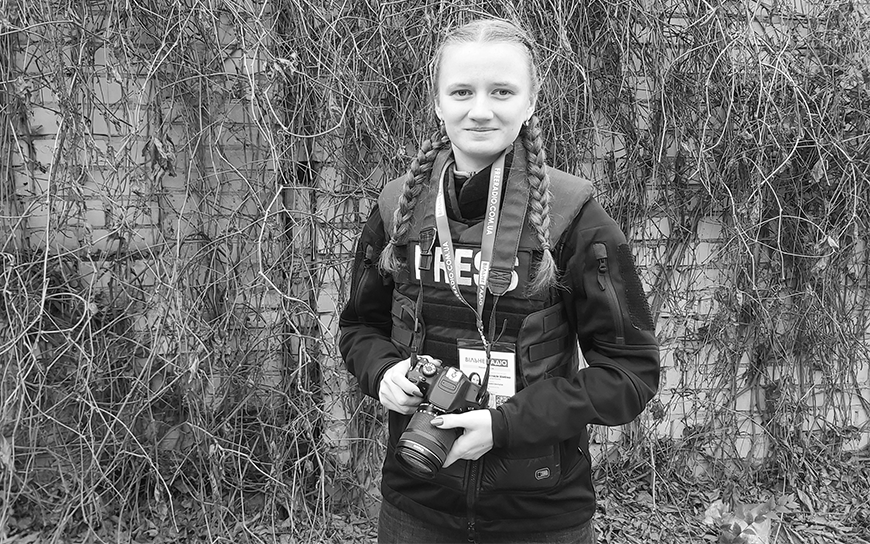 “To make change in the Donbas, you have to live here and listen to what people say. Only then will they trust you and can you make a real difference,” says Anastasia Shybiko, one of the founders of Vilne Radio – or ‘Free Radio’, a small independent radio station that operates in Bakhmut, in eastern Ukraine, broadcasting to both the Ukraine-controlled and Russia-occupied areas of Donbas region, in an interview with EED.

“The wrong information can do terrible things”

The now protracted Russian-Ukrainian war in the Donbas has already cost more than 13,000 lives and has internally displaced around 1.4 million people, while 75,000 have fled to Russia. The remaining population, often elderly and socially vulnerable, live in precarious conditions. The Covid-19 crisis has made things much worse with the closure of many checkpoints along the line of contact. Residents struggle to cover their basic needs, to travel to see their families and to access essential social services.

For the journalist in Shybiko, it is the information wars of the conflict that are one the most worrying. “The wrong information can do terrible things,” she says.

She explains that as most of the Donbas region’s residents get their news from Russian TV and radio channels, they are fed a diet of disinformation that is difficult to disprove. The few Ukrainian radio stations available in the region typically have weak signals.

“The big problem is that people don’t think about the messages that they hear. They blame the Ukrainian army for all that is bad in their lives and they think Ukraine is a corrupt country, because that is what they hear on Russian media. They tell themselves that their lives would be better in Russia: they would have better salaries, good pensions. Life would be like it was in the good old days of the Soviet Union. For them, Russia and the Soviet Union are the same thing. It’s like they live in a parallel world, because this vision does not reflect the realities of their day-to-day lives,” she relates. 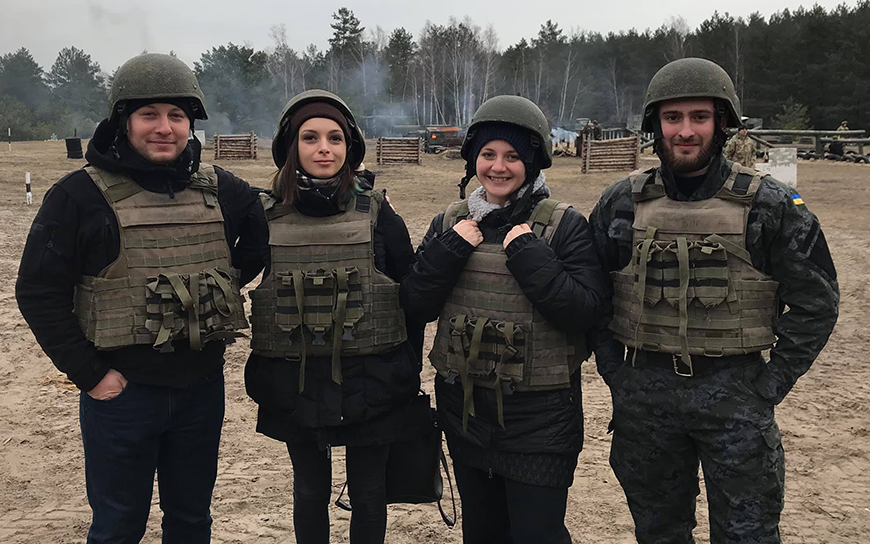 The only radio station focusing on local issues

Shybiko may still only be 24, but she has a profound understanding of the complexities of the conflict in the Donbas. She has worked in the region since the war broke out in 2014, initially combining her journalism studies in Lviv with assignments as a stringer for Hromadske Radio, winning accolades for her coverage from the combat zone. She moved to the region permanently in 2018, when Vilne Radio was founded, because as she puts it, “I wanted to do something important for my country; this was my moment.”

The bi-lingual Vilne Radio was co-founded by Shybiko in partnership with two experienced businessmen, Dmitry Kozyarsky and Ilya Lysenko. Like Shybiko, both men are familiar with the Donbas. They were already involved with ASAP Rescue, a charity focused on providing medical evacuation in the region.

Their vision was to establish an FM radio station rooted in the Donbas and focused on developments in the occupied territories and frontline communities. Today, Vilne Radio is the only local radio station focusing on regional issues. Of the initial team of nine, only Shybiko and the station's chief editor, Anna Serdiuk, had any previous media experience.

The station now reports on local and national news, on social issues and on the day-to-day challenges of life in a warzone; they also act as a watchdog on local government decisions. Thanks to support from EED, the station has been broadcasting 24/7 for two years already.

Shybiko is a well-known figure in the Donbas and she travels constantly around the region.

“We cover the subjects that are important to people here and we know the region. We tell people about grants to help develop their business and about educational scholarship opportunities for young people who want to improve their lives. We bring in experts to comment on misinformation or fake news. Because we all live here, we understand the difficulties people face in this region. That is what makes us different and more meaningful – journalists from bigger media just visit this region for a few days to do a report. They can’t analyse events like we can. They don’t have the same understanding,” she explains.

A key source of news from Donbas

Over the past two years, Vilne Radio has become an important source of news from Donbas, with major national media such as Fakty, Texty.org, Novoye Vremya and the BBC frequently using the station’s exclusive on-site reporting for their own newsfeeds, such as the recent coverage in Texty.org of court decisions with national level ramifications for the state of security in Ukraine.

The team has been busy during the ongoing Covid-19 pandemic, providing updates about infection rates in the region, carrying interviews with doctors, patients and their families about the reality of the virus and publishing daily articles on their bi-lingual website. They are serious about their public health role in informing the local population about the virus and how to protect themselves. Shybiko admits that this was an uphill battle as there is a glut of misinformation and fake news about Covid-19. But as more or more people in the region have fallen ill, people are now beginning to listen. 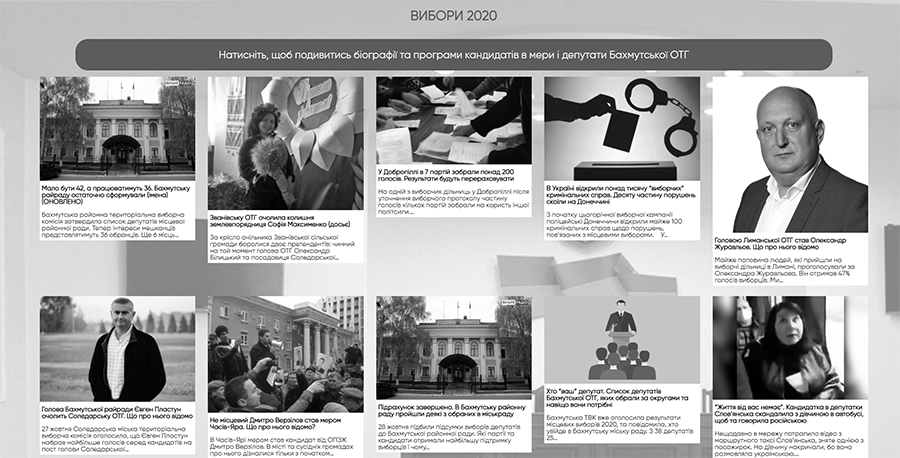 Reporting on the election

Local elections were held in Ukraine at the end of October and they were held in Bakhmut and other towns of the Donbas region for the first time in 10 years. Despite some members of the team testing positive for the virus, Shybiko covered the election period. She observed how Covid-19 patients voted in hospitals, highlighted obstacles low-mobility voters faced and she reported on any violations.

She notes that members of one local electoral commission insulted and harassed one of Vilne Radio journalists - not the first time they have faced such difficulties. The incident was later covered by national media Censor.net, Detector Media and others.

The challenges of running a media in the Donbas

It is not easy to run any business in the Donbas, and like many others, Vilne Radio have fallen victim to the dynamics of the region.

They have had to relocate their office on short notice due to power outages that cut their radio signal. They have a high turnover of staff. It is impossible to generate sustainable commercial income. Shybiko notes her determination not to accept any income that might affect the station’s independence is the reason why she refused to broadcast party political messages in the pre-election period.

Most worryingly in a region where FM radio is one of the best ways to connect with the local population, the station has now had to move to a purely online presence as their FM frequency has been blocked by the Kremlin-backed Radio Rossiya. Despite such challenges,Vilne Radio has managed to retain strong audience figures by streaming online. Last month the counted 170,000 unique monthly visitors on their website.

Despite all these challenges, Shybiko is still optimistic. The station is seeking to purchase a new FM licence despite the high costs. She is thankful for EED’s support, which means the station can employ a professional team and continue operating, ensuring they are in a better position to obtain other independent funding.

She admits that when she moved to Bakhmut two years ago, she planned to spend only three months. She soon realised that to report on events here she had to take part in them. She is determined now to stay for the long haul. Vilne Radio is making a difference to the local people's lives. “We are changing people through our work. We have already achieved so much over the past two years,” she says.