A civic organisation created by judicial experts and lawyers is promoting the rule of law and reforms in the field of justice in Ukraine. Iryna Shyba, DEJURE’s Executive Director explains that effective justice sits at the heart of democracy. 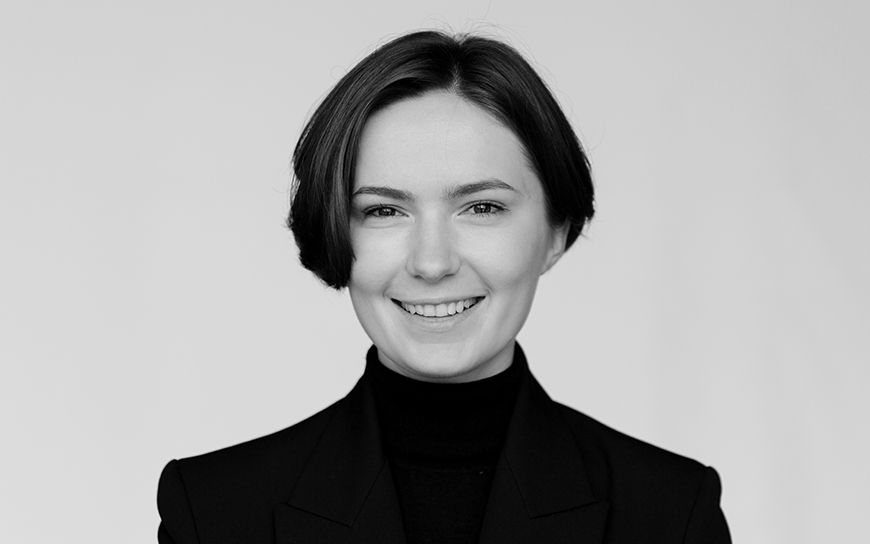 Iryna Shyba is on a train when she speaks with EED. It seems a fitting setting for an interview with this dynamic young woman who is always in motion and who was included in Forbes Ukraine list of the Top 30 under 30 just a day earlier.

Shyba’s ascent in DEJURE has been remarkable. She first joined the organisation as in intern in 2016, a few months after it was set up by a team of judicial experts and lawyers, including the now Chairman Mykhailo Zhernakov. DEJURE founders were determined to establish a judiciary in Ukraine that would be just and trusted by society. Judicial reform was one of the key demands of the Revolution of Dignity.

Shortly after joining DEJURE, Shyba was offered the role of managing its Justice for Children Initiative. She took over as Executive Director just eighteen months ago.

Shyba explains that the Foundation has a number of areas of focus.

Firstly, DEJURE are working to ensure the renewal of the judicial corps in Ukraine with the dismissal of dishonest and incompetent judges and the appointment of new professionals. The first step in doing this work is to review the judicial governance bodies – the High Council of Justice and the High Qualification Commission of Judges.

“One of the challenges we face is that in the current system, judges are not selected because they are the best candidates. They are selected on the basis of personal connections, and there are clear conflicts of interest. But there are also corruption and human rights issues. For instance, often these judges have acquired significant assets which bear no relation to their legal incomes. We still have sitting judges who violated human rights laws during the 2014 Revolution of Dignity,” Shyba explains.

She notes that as part of this work, DEJURE collaborate with law schools who are training the next generation of lawyers and judges. There are currently no ethics modules in the Ukrainian law curriculum and this can mean that students equate success in law with connections rather than honesty and integrity, essential values for any presiding judge. DEJURE are determined to change that.

During the 2019 presidential elections, DEJURE developed a ‘Justice Reform Agenda’ which outlined the main steps necessary for genuine judicial reform, and this was promoted by a team of partner civil society organisations. Five candidates supported the campaign, including the current President Volodymyr Zelensky. Unfortunately, as Shyba notes, to date Zelensky has not delivered on these promises. 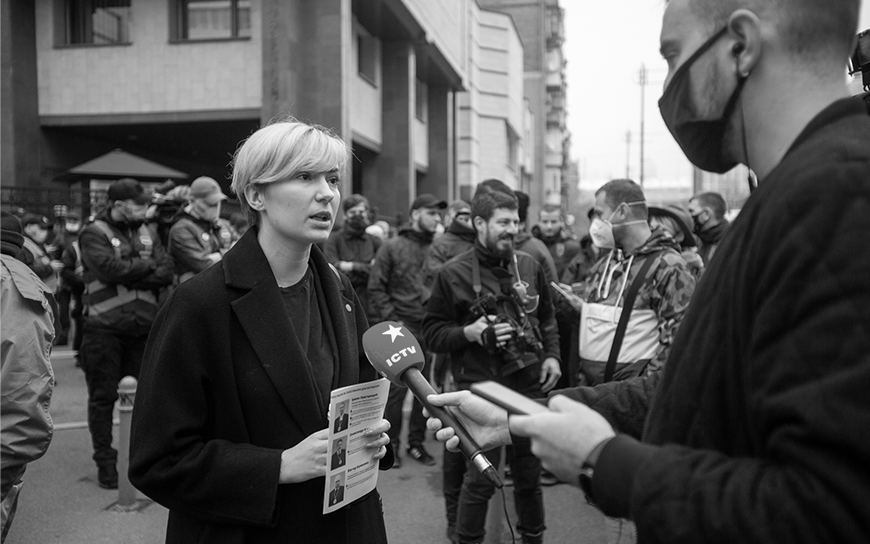 A second important tenet of DEJURE’s work and Shyba’s former focus of attention is children-friendly justice.

The Foundation works in close collaboration with judges, prosecutors, lawyers, investigators, police and the Ombudsmen for Human Rights and for Children to ensure that the best interests of the child are at the centre of the justice system. Restorative justice programmes are another area of focus, and DEJURE are also working to ensure that Ukrainian legislation is in line with the UN Convention on the Rights of the Child and other international standards.

The third aspect of their work is justice for business. As Shyba remarks, international investors are unlikely to invest in Ukraine if there is no legal protection of their assets under law. In 2019, DEJURE’s experts helped develop draft legislation to improve the arbitration laws system.

EED recently provided a grant to DEJURE to support their work as part of an anti-corruption alliance with the All-Ukrainian Association Automaidan and the Anti-Corruption Action Center (AntAC) to ensure accountability of government and transparency and fairness within the new anti-corruption bodies set up in Ukraine. As part of this alliance currently supported by EED, DEJURE is closely monitoring the judicial reform agenda.

“We are monitoring legislation related to the judicial system and are working on draft legislation that will make the judiciary more independent. We monitor the Constitutional Court of Ukraine (CCU) decisions. Given that the CCU is influenced by politics, our role is to depoliticise the process of CCU judges’ selections. We have a particular interest in observing the work of District Administrative Court of Kyiv. An important part of what we do too is to keep society informed on developments,” she explains. 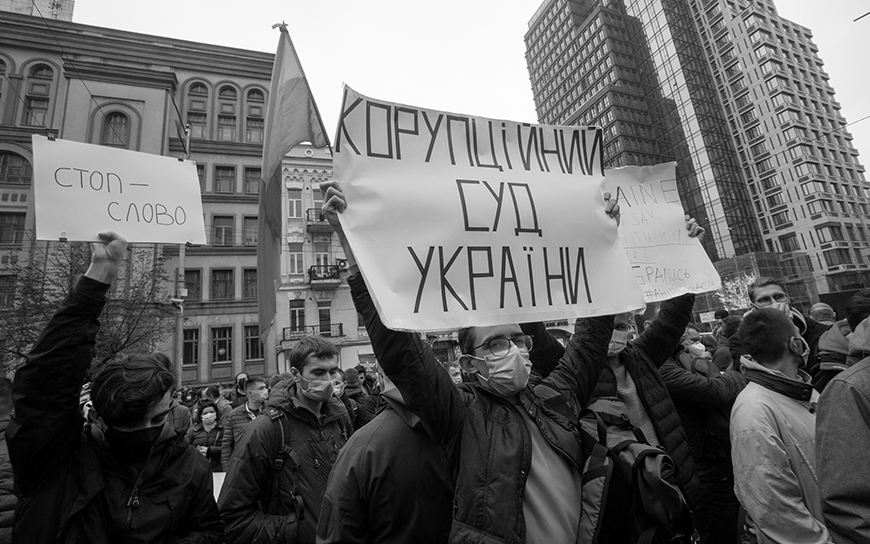 This work is vitally important as Ukraine now faces a constitutional crisis with the CCU’s recent controversial decision ruling that the National Agency on Corruption Prevention (NACP) no longer has the authority to require officials to submit electronic asset declarations, an attack on key anti-corruption laws in Ukraine. This decision threatens the reform agenda and the national security of Ukraine, according to Shyba.

The legal experts at DEJURE have developed a comprehensive online document outlining ways to solve the constitutional crisis by restoring the integrity of the CCU and providing for stability of anti-corruption infrastructure.

This constitutional crisis is just one of the latest challenges faced by DEJURE in their work to reform the judicial system.

“It is difficult to change a system that does not want to be reformed. Corrupt judges do not want to give up their positions, and of course, there is a lack of political will. But reform of the judicial system is vital for Ukraine’s future, no other reforms are possible without judicial reform. How, for example, can we ever achieve land reform without judicial reform?” she asks. 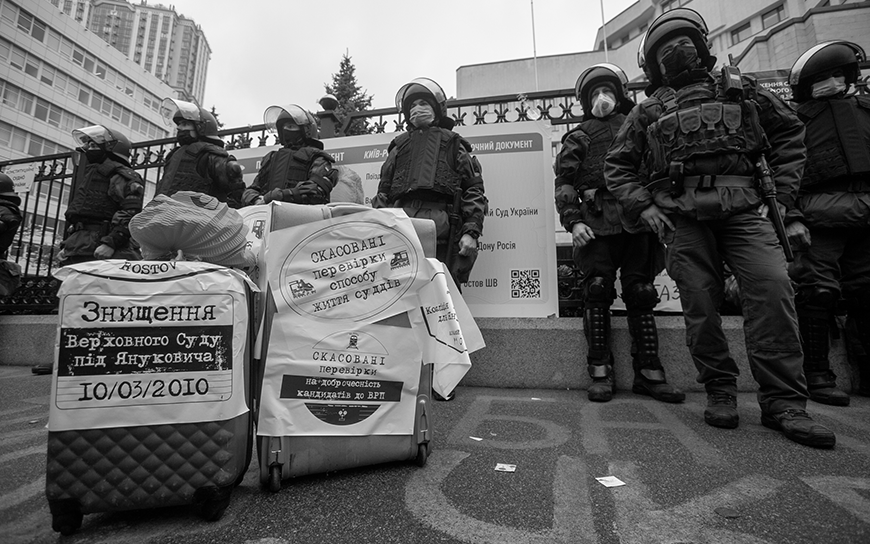 She believes that there is a real appetite for DEJURE’s work. “People see injustice every day. They have constant encounters with corrupt officials who are not liable under any law. It is not something you ever need to explain. People want justice, fair trials and fair judges. They understand that this is vital for Ukraine’s economic future. Our job is to force state institutions to be accountable and to select judges who will do their jobs properly,” she says.

She believes that the DEJURE team are important agents of change and she is proud of the team’s achievements.

“I came to DEJURE to help and for four years we have been running a marathon. We are fighting powerful corrupt people who resist judicial reform. But I believe we will succeed. It is all about an evolution in the way people think and about training a new generation of legal minds who will become the judges of the future, judges of integrity,” she concludes.