Defending the rights of Ukrainian women soldiers and veterans and helping to build a more equal democratic future. 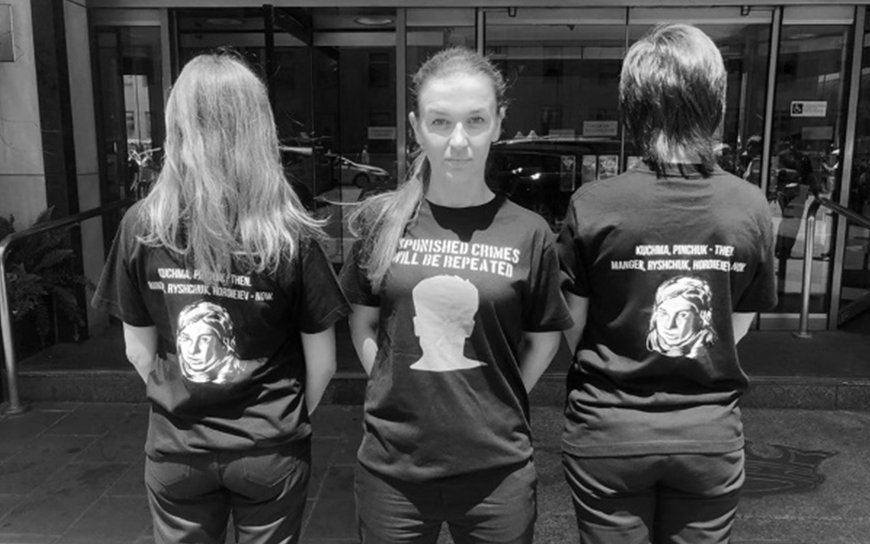 Andriana Arekhta’s life has been transformed since the Maidan protests began in 2013. Then a fresh-faced recent graduate bound for an international marketing career as a brand manager, she is now a war veteran who has seen active service in some of the bloodiest battles of the protracted Russia-Ukraine war. She heads the Ukrainian Women Veterans’ Movement. For many in Ukraine, hers is the face of women veterans.

Her transformation was a gradual one; but in her view, it was also unavoidable. After months of combining her day job with night time protesting on Maidan Square during the Ukrainian Revolution for Dignity, it was Russia’s invasion and annexation of the Crimea in March 2014 and the subsequent eruption of war in the Donbass region of Eastern Ukraine that made her realise this was a critical moment for her country.

In May 2014, she hailed down a mini-van taxi joining 100 other volunteers headed for Luhansk in the Donbass. “I left for 5 days. I just knew I had to do something. No one was talking about war then and I had no idea that I would end up serving as a volunteer and then a soldier for the next 15 months,’’ she tells EED in interview by telephone from Kyiv. She only resigned her commission during her pregnancy in 2015. Her husband, a fellow battalion soldier, still serves in the Special Operation Forces.

In those early months of war, she was one of the few women volunteers in active service. She received no formal training to prepare her for military life. She was not issued military fatigues, admitting to fighting in a t-shirt and trainers at first. She did not even know how to handle weapons; she once stored a hand grenade in her bra for safe-keeping as she was afraid to lose it. She credits the commandant of the Aidar battalion where she fought from June 2014 for her training. “He saw my potential and he knew that I could fight,” she says. 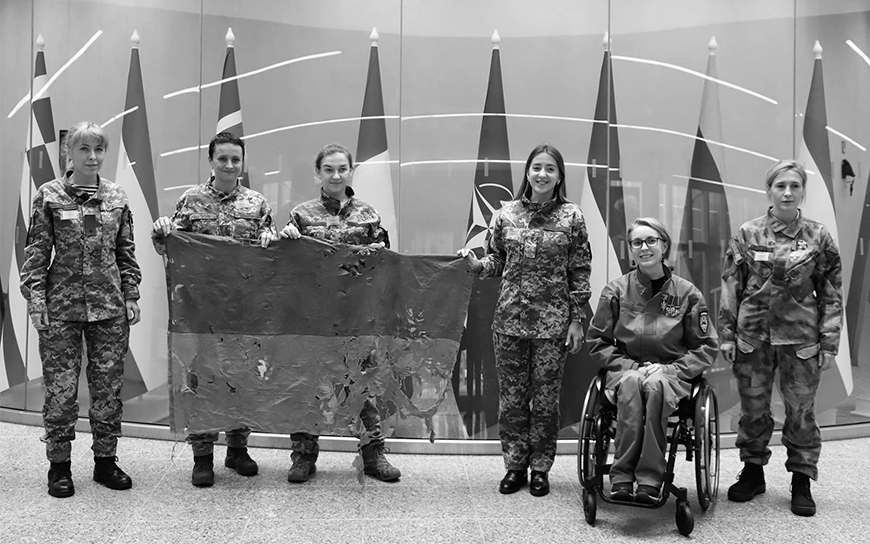 Arekhta believes that she and the other volunteers were vital to Ukraine’s early response to Russian aggression as the army lacked an adequate staff at that time, although at first, she had no official military status. Officially she was registered as a seamstress.

“If I had died, I would not have been recognised as a soldier who had died for their country. I would just have been a seamstress who died at war,” she relates. She mourns the many hundreds of volunteers and friends who died needlessly due to a lack of training and equipment during those initial months, and she admits that women soldiers and veterans still face many challenges in the highly traditional military and legislative environment of Ukraine.

The Ukrainian Women Veterans’ Movement, the association founded by fellow women veterans in 2019, is working to address these challenges and to defend the rights of women soldiers and veterans. Members advocate for gender parity in the military and are seeking to improve public perceptions of women veterans and service women. The Movement also provides an invaluable support network for these former women soldiers.

She remembers the women’s first informal meetings as an eye-opening experience. “As war veterans, we realised we are all facing the same issues. It is incredibly difficult to step back to normal life when you return from the front. You need the support of women who like you are witnesses to the horrors of war. We have lost our brothers and sisters but the society we live in has no concept of what we have lived,” Arekhta relates. 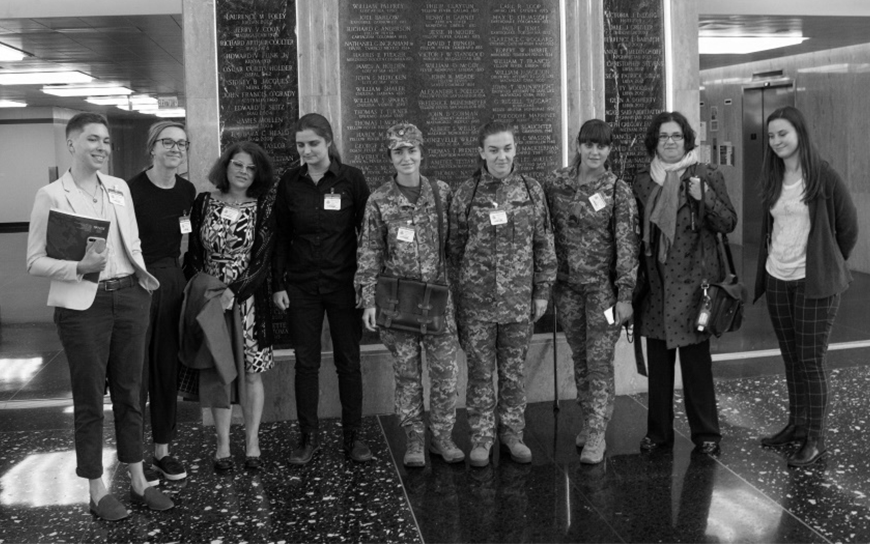 One of the women veterans’ most important achievements was the passing of landmark legislation in 2018 that recognised combat roles for women for the first time, vital in a country with one of the most feminised armies in Europe.

Recently, the Movement advocated for a change in the law to allow women to attend military academies, previously only open to men. As of 2019, young women can obtain the practical and psychological training they need for combat roles. Women now receive formal military assignments like men; they are no longer just volunteers. As Arekhta puts it, “women can play a real part in the war.”

She acknowledges that life is not easy for women soldiers during and after their service. Despite immense personal sacrifices, women face sexual harassment and discrimination. Women cannot become officers in the army. Soldiers and cadets struggle to obtain appropriate fatigues and many are forced to wear men’s underwear as regulation female underwear is in short supply. With a shortage of gynaecologists and obstetricians in the Donbass, soldiers have little access to the medical care they need during their service and this can have long-term effects on their health. Many injured and maimed veterans also struggle to obtain state payments due to bureaucratic challenges. 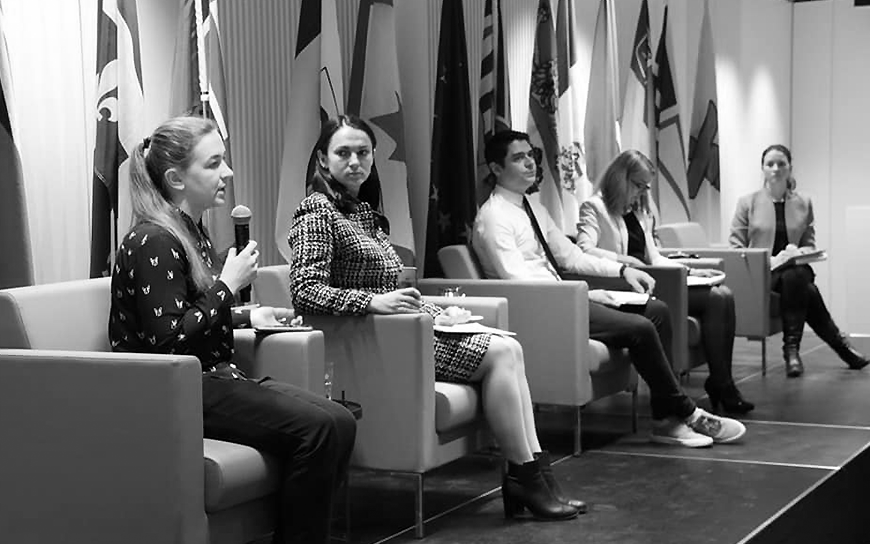 With EED support, The Ukrainian Women Veterans’ Movement is now fully engaged in an ongoing dialogue with Ukrainian lawmakers, the military, civil society and wider society to address these and other challenges. As part of this work, they give talks throughout the country, particularly in schools where they relate their experiences and they talk to children about the importance of democracy and gender equality.

As part of their efforts to bring attention to the experiences of women soldiers, they produce documentaries featuring women who have died in service. These short films published on their Facebook account tell these soldiers’ stories through the voices of their families, friends and fellow soldiers and often include footage of the women themselves. Beautifully filmed, they fill an important gap in Ukraine’s military narrative, where these stories rarely feature.

This year, the Movement took part for the first time in the March of Defenders on Ukraine’s Independence Day, an important action to recognise the central role played by women in active combat.

With local elections this October, two dozen women veterans are standing as candidates in their districts. These women have all participated in a mentorship programme run by the Movement that helps match veterans with mentors to develop their leadership skills and expand their networks.

“These veterans want to help Ukraine and to help improve life for people in their local towns. They want to build a democratic future for Ukraine,” Arektha notes. The women represent a variety of political parties as the veterans’ movement is strictly apolitical.

Now armed with a Master of Public Administration degree from the prestigious Kyiv-Mohlya Academy thanks to a scholarship programme for veterans, Arekhta is clear about her vision for the future.

“I want to help others learn from our experience as veterans. We are in regular contact with the Ministry of Defence and with members of parliament advocating for the removal of anti-discriminatory policies within the military as required by Ukraine under the obligations of NATO protocols. Unfortunately, most of our generals are from another era and they resist reform. We need the younger generation to bring about this change. This is one reason why as veterans we talk with Ukraine’s children. We want the younger generation to understand the importance of democracy, to be active and to work for a better more equal Ukraine,” she concludes.