Association of Relatives of Political Prisoners of the Kremlin

Advocating for the release of Ukrainian political prisoners held in Russian prisons and supporting the families of the imprisoned. 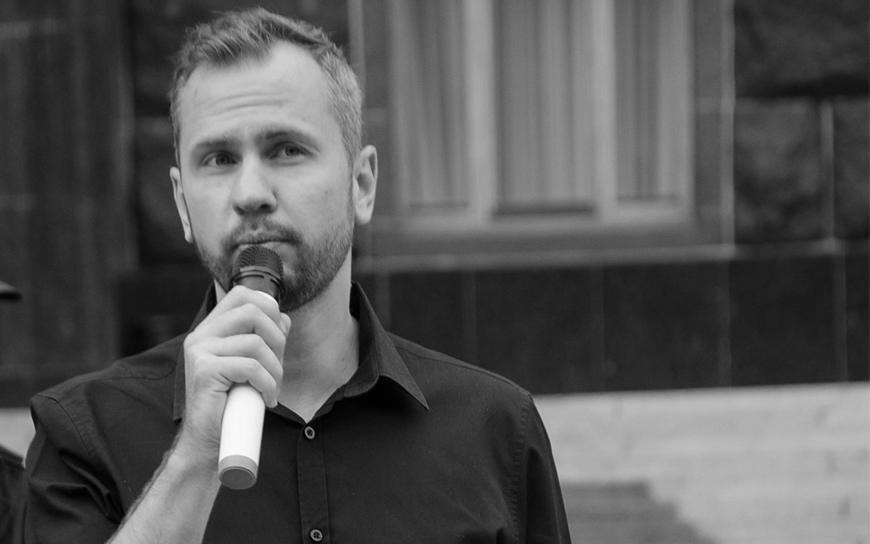 On 22 September, the Association of Relatives of Political Prisoners of the Kremlin published two compelling infographic maps on its website with the names and black-and-white headshots of Ukrainian political prisoners held in Russia. One carried the faces of 38 prisoners held in prisons in occupied Crimea and the other of 61 prisoners held in Russia. Most prisoners are Crimean Tatars. Only 48 of them have been sentenced and the years of their sentences appear in red circles to the right of the photographs; some are sitting out sentences as long as 19 years.

A further two dozen men, again mostly Crimean Tatars, are under house arrest in Crimea or are banned from leaving the territory. The infographics note there are at least this many political prisoners. There are probably far more.

EED speaks with the Association’s Chairman, Igor Kotelianets, from his office in Kyiv that same day. Kotelianets explains that this list is the work of a number of human rights organisations, who thanks to an ongoing collaboration with family relatives, human rights advocates and lawyers, piece together the stories of the arrests and imprisonment of these disappeared men.

Kotelianets has worked with the Association since it was founded in 2016. He, like all the other 94 members, is a relative of a political prisoner. His brother Eugen Panov disappeared on 6 August 2016 and it was months later that his family learned he had been captured by Russian secret services while in Crimea.

At the time, Panov worked as a driver at the nuclear power plant in Energodar in the Zaporishya Oblast in southern Ukraine. When war broke out in 2014, he organised a group of volunteers to defend the city from Russian mercenaries and he established a local NGO to supply Ukrainian forces in the occupied territories with food and medicine. On that fateful day in 2016, he travelled to Crimea on the request of another volunteer to help a local family escape the territory. He was immediately arrested.

It was two months before Panov’s relatives had any news of him, and when this emerged it was every family’s nightmare. A video of a terrified Panov with swollen eyes and a battered body was broadcast across Russian mass media as he read out testimony dictated by his captors claiming that he had been arrested as a spy in Crimea as part of Ukrainian sabotage of the territory.

“It was clearly politically motivated,” recalls Kotelianets. “Russia wanted to use this video to discredit Ukraine internationally and to accuse Ukraine of promoting terrorism and non-compliance with international law obligations.”

On 13 July 2018, Panov was sentenced to eight years in a maximum-security prison for his purported activities in a case of the ‘Ukrainian Saboteurs’. He was later transferred from Simferopol in the Crimea to the notorious Lefortovo prison in Moscow and then to Colony number 6 in Omsk. 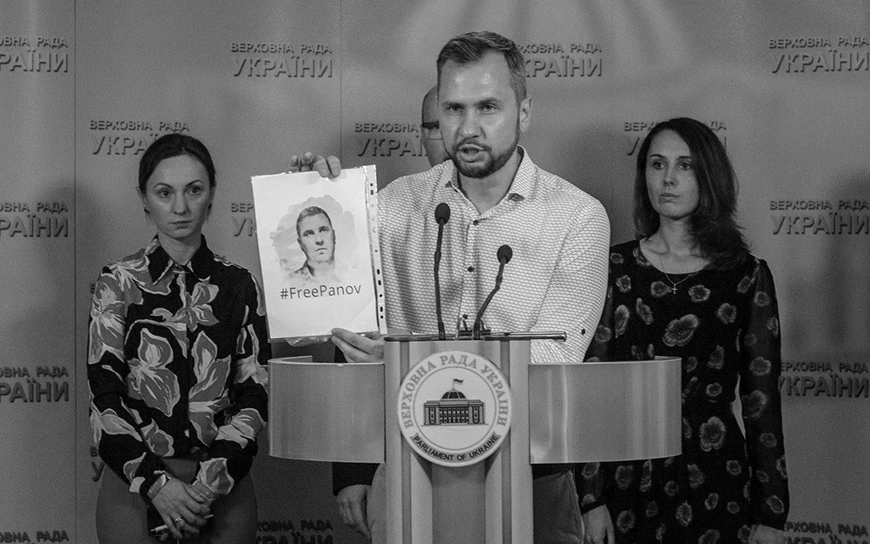 Panov’s ordeal during his arrest and later imprisonment makes for a difficult conversation. He was brutally tortured and he has suffered serious health issues ever since. His teeth turned black and he suffered breaking teeth and debilitating toothache while in prison. It took his lawyers months to negotiate access to dental treatment.

One of the initiatives the Association now encourages is for Ukrainian citizens to write to the prisoners and they publish the names and addresses of all prisoners on their website. Prisoners are only permitted one phone-call a month, and with the current Covid-19 pandemic, the formerly rare family visits are now impossible. They have little contact with the outside world and many feel abandoned by their families and society so these letters offer an important life-line. Kotelianets relates that one day his lawyer, Vera Goncharova, showed Panov a Facebook page with 40 pages of birthday greetings during a rare visit, at a time when he felt he had been forgotten.

Panov is one of the ‘lucky’ ones. He was released on 6 September 2019 as part of a high-profile swap of detained persons between Russia and Ukraine. He has now returned to his home town where once again he is active in local politics.

But Kotelianets is at pains to note that these swaps do not mean that the issue of political prisoners is coming to an end. “There are nearly as many Ukrainians languishing in Russian prisons today as before. Russia may have released the most high-profile prisoners, but we need to fight for the 100 other prisoners. It’s hard to keep the momentum going but that is what we try to do,” he explains.

Initially formed to provide legal and psychosocial assistance to prisoners’ families, advocacy is now central to the Association’s activities. It works closely with the various Ukrainian ministries, advocating successfully for the creation of a new department within Ukraine’s Ministry of Temporarily Occupied Territories to focus on issues related to political prisoners. It has organised meetings with relatives with the current and former presidents of Ukraine. It works on legislative amendments to improve social support to families, and has played a key role in formulating a Law on War Crimes, still to pass final review by parliament, that will ensure the status of the political prisoners as victims of Russian aggression providing for social guarantees for political prisoners. 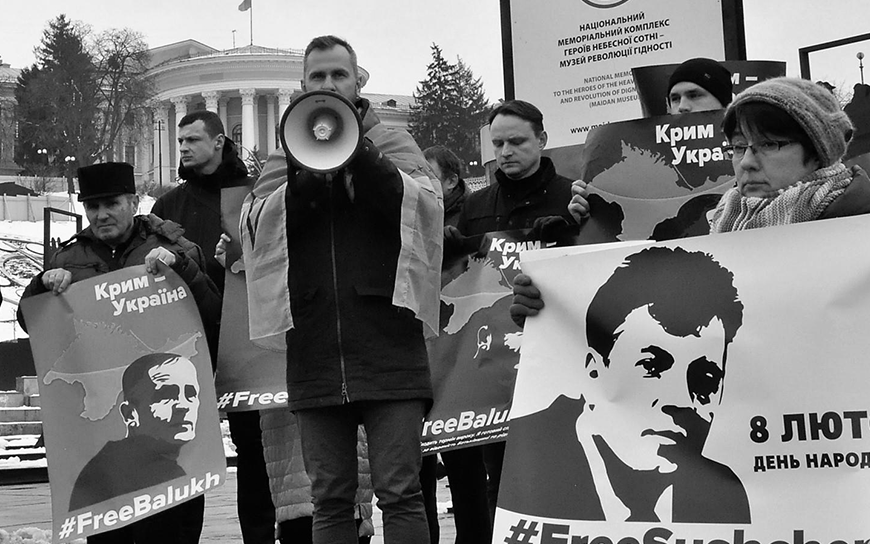 Association members previously visited European capitals and Washington to advocate for the release of the prisoners. Now this advocacy has moved on line, and with EED support, members recently organised an online conference highlighting the fate of the prisoners, even more difficult in a Covid-19 environment. Many prisoners have succumbed to Covid-19, which is now ravaging the Russian penitentiary system, but none have been tested or have any access to treatment.

It is important to maintain the momentum of this advocacy despite the current challenges. With EED support, Kotelianets also presents a weekly show, ‘Free our Relatives’, on Hromadske Radio in Kyiv where he addresses topics such as the first draft of the Bill on War Crimes, interviews former prisoners such as Edem Bekirov and discusses the cases of current prisoners.

“We are a unique organisation,” he explains. “We are not a group of professionals. We are people who come from different backgrounds but are united by a common trauma. We help prisoners and their families access legal support and the state benefits that they are due. We help them in the day- to-day.”

The association’s strength is the emotion that the association’s members bring to their work, but this too is not without its challenges. “We cannot underestimate the risk to ourselves of doing this work. I talk to relatives all the time and I tell them: ‘You need to look after yourself. Your relatives need you to be in good health. You cannot give all of yourself to this project,” he relates.

Kotelianets is thankful for the ongoing support from his wife and professional psychologists who helped him through some very dark moments over the past years, an experience shared by other members. Looking to the future, his first objective is to secure his replacement within the Association as his mandate expires at the end of the year.