Fighting for the rights of transgender people in Armenia

Lilit Martirosyan is a fearless activist who is determined to improve the lives of transgender people in Armenia. 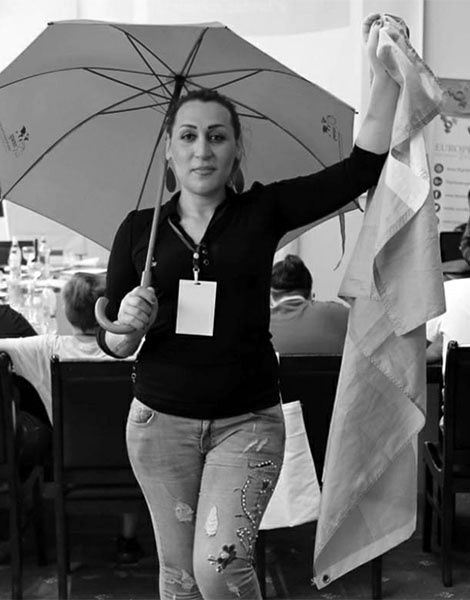 In April 2019, Lilit Martirosyan became the first member of Armenia’s LGBT community to take to a parliamentary podium when she spoke out against discrimination against transgender people at a session of its Committee on Human Rights.

She described a community that has been, “tortured, raped, kidnapped, subjected to physical violence, burned immolated, knifed, subjected to murder attempts, killed, emigrated and robbed.” She stated that at least 283 crimes against transgender people were registered up until last year. A video of her speech was shared throughout the world and was widely shared in international media.

Martirosyan’s speech sparked a violent backlash and protests and there were calls for Martirosyan, her family and colleagues to be tortured and killed and for the Right Side Human Rights Defender NGO that she leads to be closed. Personal information, including her home address, was published, forcing her to move house and to temporarily leave the country. This is not the first time Martirosyan, Armenia’s first registered transgender woman, has received death threats.

While the 2018 Velvet Revolution has brought about a more democratic environment in Armenia with free elections and more freedom of speech, conservativism is also on the rise both within government rhetoric and within society as a whole. Human rights defenders, members of minorities and journalists all report an increase in hate speech, discrimination and other forms of attack and harassment.

Life for transgender people in Armenia is particularly challenging. Although homosexuality was decriminalised in 2003, discrimination against LGBT people in rife. There have been frequent anti-LGBT protests in front of the national assembly in the recent past and both parliamentarians and public officials have called for Martirosyan to be burned alive.

Speaking of the experience of transgender people in Armenia, Martirosyan says, “As a transgender community, we all constantly face hate crimes, hate speeches and discrimination. Armenia is a heteronormative society that cannot understand our gender identity. For me a transgender woman, when I openly speak about our problems, they want to kill me and to hurt me.”

EED support has enabled Right Side Human Rights Defender to develop into a strong community hub that protects and speaks on behalf of marginalised voices in Armenia as nationalist and xenophobic rhetoric gain momentum. The NGO works to raise awareness on transgender issues, campaigning on social media and working with local journalists as well as equipping activists with the skills they need to defend their rights.

Martirosyan and her colleagues can already speak of some achievements, “Thanks to our passport name protest, it is now easy for transgender people to change their names on passports. This was previously impossible.” Indeed, Martirosyan was the first Armenian to obtain a passport under her new name in 2015.

Last December, Martirosyan and her colleague Ashot Gevorgyan travelled to Geneva on behalf of Right Side to present recommendations for Armenia on LGBT rights to the UN member states and to lobby at the UN Human Rights Council (HRC) during the 3rd Cycle of the Universal Periodic Review (UPR) pre-session. During the session, she emphasised that importance of implementing previous UPR recommendations in Armenia and for the rights of LGBT people to be protected from discrimination and hatred.

During her speech, she called for the development of legislation to prohibit discrimination based on sexual orientation and gender in education, employment healthcare and housing; the adoption of a law to criminalise hate speech and hate incitement towards LGBT people; the removal of transsexuality from the list of diseases according to the 11th revised version of the WHO international classification of diseases; and the elimination of the legislative requirements requirement mandatory sex change for legal gender recognitation and gender marker change in documents.