Involving men in women's inheritance rights through the arts

Gallery director and psychoanalyst Hakima Lebbar has produced a book, touring exhibition and series of debates engaging men in the fight for equal inheritance rights for women in Morocco. 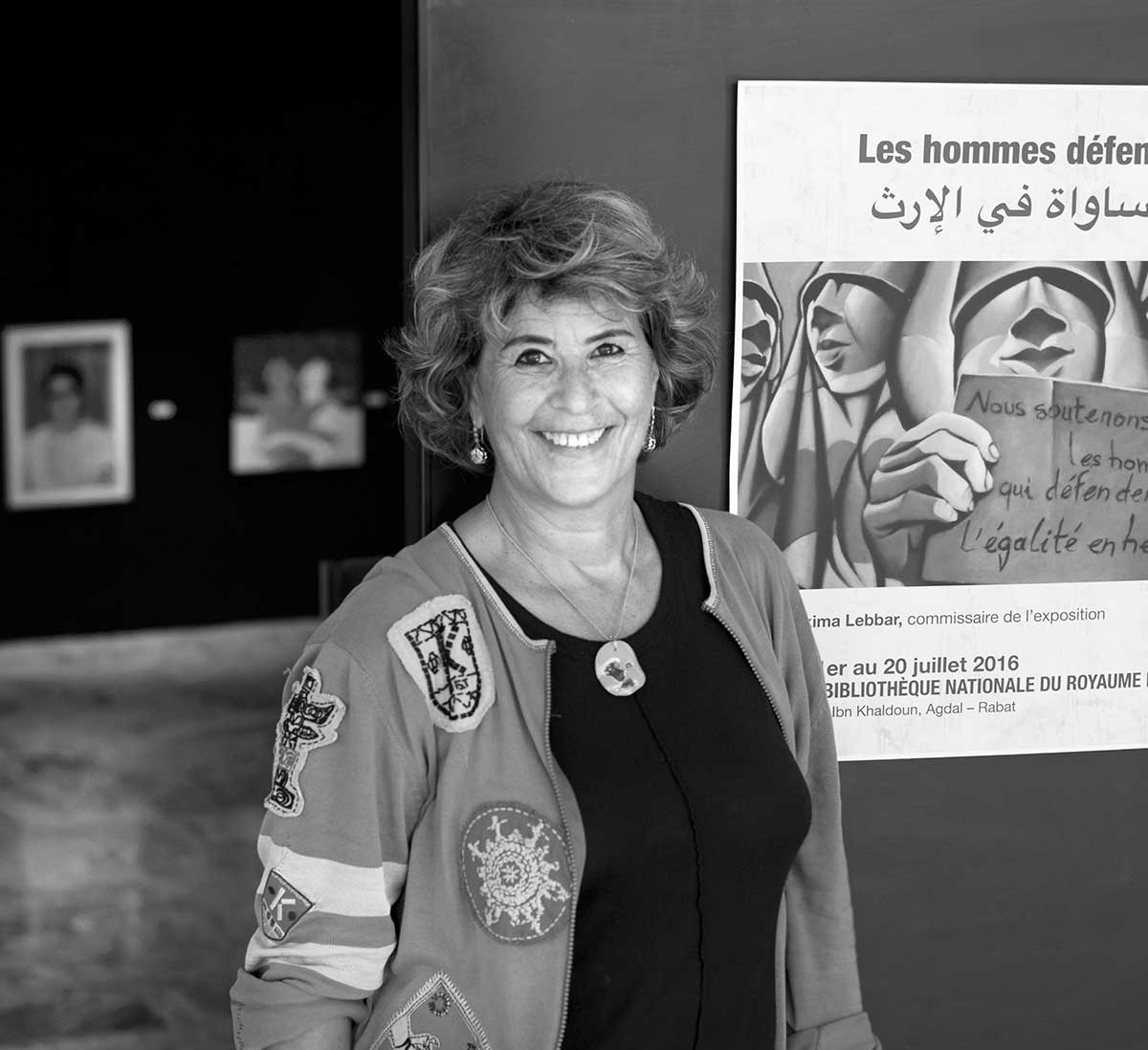 Some people get involved in civic activism well into their lives, triggered by an event or set of circumstances. Others seem born to do it.

“I’ve been an activist all my life,” says Hakima Lebbar. She first became interested in human rights and equality while still at high school. As a student, she joined the National Students’ Union of Morocco. Eager to fight injustice and to fight for democracy, she became involved in various civil society organisations and was one of the co-founders of the anti-corruption NGO Transparency Morocco.

She became a practicing psychoanalyst in 1989 and since 2004 she also runs an art gallery in Rabat. At first glance these might all seem like very different domains, but Hakima sees a connection between them:

I use my expertise in psychology and my ability to mobilise artists to push for social change.”

Hakima has recently published her third book about issues affecting Moroccan society. Following collective works on anti-corruption and women and religion, her latest work, published with the support of the European Endowment for Democracy (EED), is an anthology of writings by men – ranging from academics and theologians to poets, musicians and journalists – on the subject of equality in inheritance rights.

In Morocco, a narrow interpretation of Islamic teachings means that women are severely disadvantaged when it comes to inheritance, receiving only half the amount of male heirs. With religion deeply embedded in Moroccan society, the first step towards equality is creating a national conversation about the issue. And since men are advantaged in inheritance matters, who better to advocate for improving equality in inheritance rights than men themselves?

Engaging all generations, from all backgrounds

To change attitudes in the wider Moroccan society, including among illiterate populations, Hakima realised that a book alone wouldn’t be enough. So as part of the initiative, she invited male artists, aged from 28 to 80, to produce a piece of art inspired by the topic. The resulting exhibition of paintings, photographs, cartoons, sculptures and installations has travelled around the country, accompanied by a series of public debates.

Many towns and villages in Morocco have local cultural centres established by the Ministry of Culture, which are hubs of educational, cultural and social activity. Hakima used these, with the support of local civil society partners, as the natural place to reach a diverse audience.

Another important element was the inclusion of speakers with different expertise. Hakima was joined by among others Ahmed Aassid, a philosopher, poet and secularist, Abu Hafs, a former extremist preacher turned rights activist, and Farida Bennani a feminist activist and university professor of public law. This allowed the theme to be approached from different perspectives, for example from the religious versus secular angle or by explaining the different relevant religious texts and the evolution of society.

“In one debate, the director of the local school said that she had been a feminist all her life but begged us, ‘please, do not touch the Koran!’” recounts Hakima. “Because we had an Islamic scholar as part of the panel, he was able use verses from the Koran to show how a fair inheritance system is not in fact in contradiction to the Koran. He explained how the inheritance system was based on a societal structure that no longer exists and therefore can be adapted. By the end of the debate, she said that she was convinced and that she would help spread the word.”

But not all encounters were so straightforward. In some places, Hakima and her team faced opposition from local officials or religious leaders. False information was put out that a debate was cancelled, people were intimidated not to attend, the location of the event was changed at the last minute or the cultural centre staff refused to publicise it. In the Sidi Moumen district of Casablanca, for example, instead of an audience in the hundreds, they were only able to gather some twenty people.

“We really believe in what we are doing and that helps overcome obstacles,” says Hakima. “Once when an event was cancelled and people turned up anyway, the next day many of the people were discussing the subject of inheritance in the cafés of Azrou.”

And the message is getting out. Videos about the project have already been watched more than 70,000 times online in different forums.

“We have managed to launch the public debate. The next stage is to try and turn this into law,” says Hakima.

She knows this will be difficult and will face opposition from religious institutions and associations. But it’s part of a process and she is optimistic that progress can be made.

In the meantime, to keep the conversation alive, she plans to take the roadshow to difficult zones in the north of the country, as well as to the Sahara in the south and beyond.

As she says, “After more than 40 years in activism, you don’t give up easily!”