Known as an investigative journalism platform before the full-scale invasion of Ukraine, Slidsto.info is now collecting evidence of Russian war crimes. 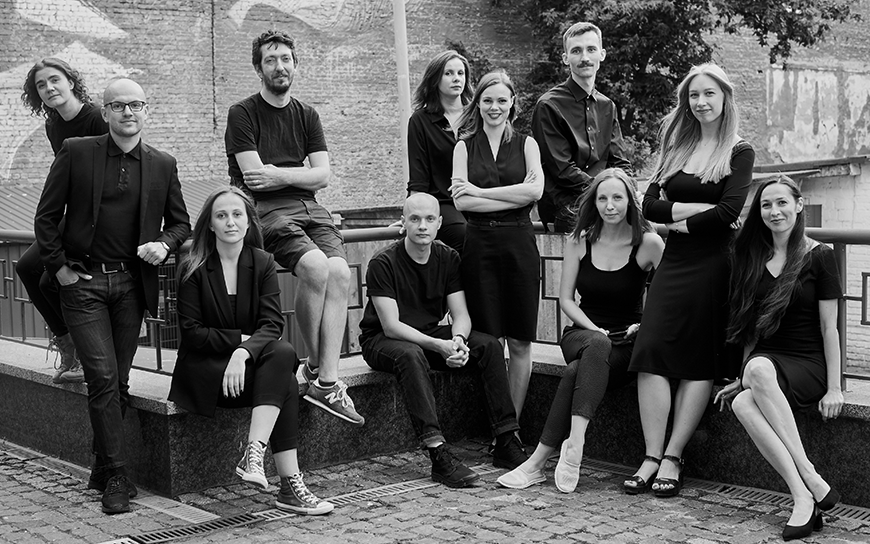 She goes on to explain the approach taken by this leading investigative media. “We talk to victims, collect any evidence we can find – papers, bullets. We figure out what military units were based here, and who the solders were. We look up their profiles on social media. We print out pictures of them and go back to villages and show them to people to see if they recognise them. That way, we can build profiles of the crimes they have committed,” she says.

Slidstvo.info were one of the first Ukrainian media to start doing this work. During the first six months of the war alone, the Anti-Corruption Headquarters and Slidstvo.info’s investigative journalists amassed profiles of 148,631 Russian military personnel in an online register of Russian war criminals.

This work has not gone unnoticed. On 6 December, Anna Babninets, editor-in-chief of Slidstvo.info was awarded a prize from the German Reporters’ Forum Reporter:innen-Forums for this work. The outlet was also one of the recipients of the 2022 IPI-IMS Free Media Pioneer Award from the International Press Institute.

Yanina explains that the team was ready for the war when the Russian full invasion began on 24th February. “We already had bulletproof vests and we had all the equipment we needed. We had planned for the worst possible scenario, that Kyiv could be taken. Most of the team left the city on that first day. Those journalists who remained in Kyiv immediately began to report from bombed areas, taking film footage and documenting everything,” she says. 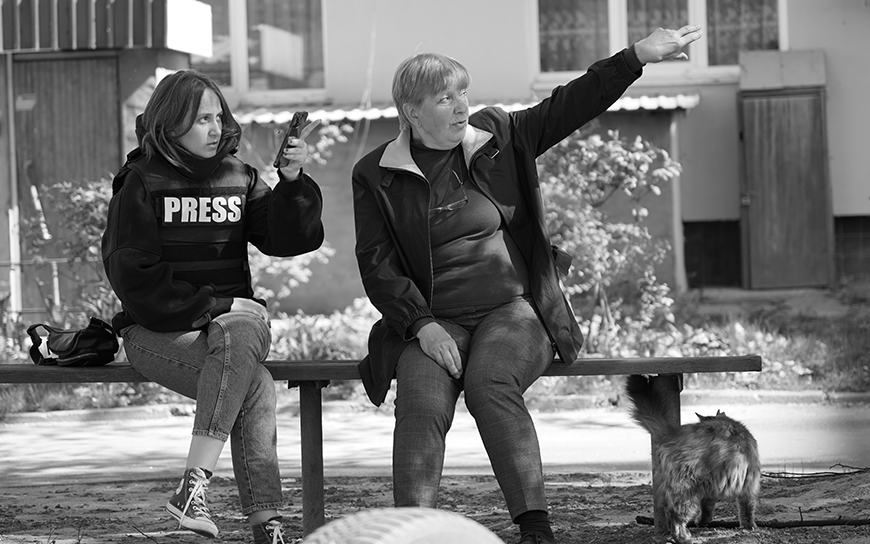 From investigative media to war reporters

Part of the Organized Crime and Corruption Reporting Project (OCCRP) network, Slidstvo.info was already an award-winning investigative media prior to the full-scale war, which had collaborated on high-profile investigations including the Pandora Papers, the Panama Papers, and Suisse Secrets. Videos are central in communicating this work. Yanina notes that prior to the war Slidstvo.info’s worked with OCCRP to produce a movie on the murder of Belarusian-Ukrainian journalist Pavel Sheremet, who was killed in a car bomb in Kyiv city centre.

“When the war began, we had to change focus. We became war reporters overnight, although we still take an investigative approach to our work,” says Yanina.

She notes that many of the tools usually used by investigative journalists are not accessible at this time of war; for instance, government databases cannot be accessed for security reasons. Slidstvo.info have met this challenge head on and are doing more field work, with a focus on investigating cases of war corruption and infringements of human rights, particularly Russian war crimes.

They are continuing to produce videos, but these are usually shorter-length pieces. Most material on the website is also available in English, and videos are also subtitled in English for international audiences. 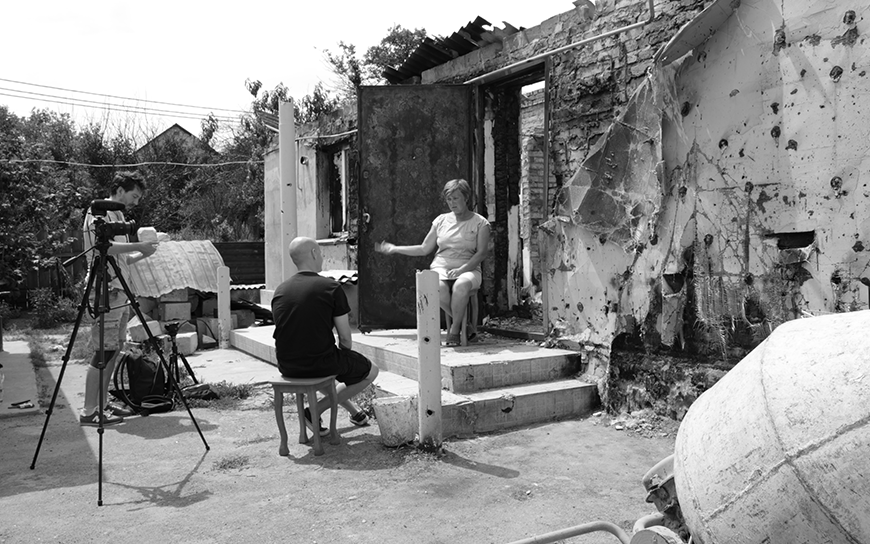 The team are in constant communication with people in occupied area and in areas that have been recently liberated by Ukrainian troops.

A recent report highlighted the forced mass deportation of citizens from the occupied city of Mariupol, based on interviews with men and women who had escaped to Europe via Russia. Another report from Kupiansk, a previously occupied city near Kharkiv, exposed each step of the Russian occupation of the city, and it was based on witness accounts and analysis of Russian soldiers’ social media postings. Other reports focus on the work of collaborators in occupied territories.

Slidstvo.info is currently working with Reporters Without Borders to expose instances of kidnappings of journalists by the Russian occupiers.

Yanina notes that despite the conditions of war, Slidstvo.info continue to expose cases of corruption within Ukraine. “We are not a press centre for the government,” notes Yanina. “Even if today, we are working in survival mode and normal life is on pause, there will be another life later. As journalists we are writing history now.” 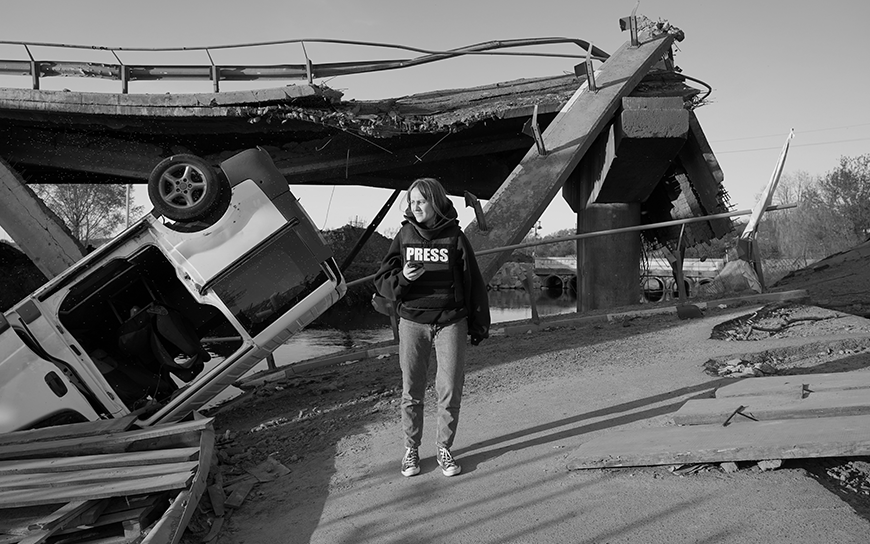 Yanina is the first to admit to the dangers and stress faced by Ukrainian journalists in their everyday work. It is not just those who report from the frontline who face daily dangers, but journalists throughout the country.

“It is extremely dangerous for journalists who live in temporarily occupied territories. They can be followed, threated, tortured, and worst of all, imprisoned in Russian jails. Even if they are not currently working journalists, it’s enough to exist as a journalist to be in danger,” she says.

She also notes the psychological pressures faced. “As journalists, we write about death and torture every day. We talk to people at the worst moments of their lives, and we have to be their psychologists as well as journalists. This work takes its toll,” she says. She admits that she had to take time away from fieldwork after writing about the ordeals faced by Mariupol residents.

She is very aware too of the dangers of journalists getting too personally involved in their work. Slidstvo.info factcheck each report and continue to work closely with OCCRP, who flag such issues. “We constantly remind ourselves to work to a high standard, and to use professional journalistic vocabulary in our reports,” she says.

Now, Yanina, and her fellow journalists at Slidstvo.net and other media throughout the country are struggling to continue to work in the face of intermittent power and heat outages, and poor mobile phone coverage.

“In a way our mission as journalists is clearer than before the war. We are an essential part of this fight for Ukraine. But we need to be careful. We need to take of our relatives, and to try to prepare them for what is ahead. We also need to take care of ourselves. No story is worth the life of any journalist,” she says.