A business media reporting on the war in Ukraine

A Ukrainian business-focused media has changed its editorial policy to start reporting on the war, attracting tens of millions of readers from throughout Ukraine and beyond. 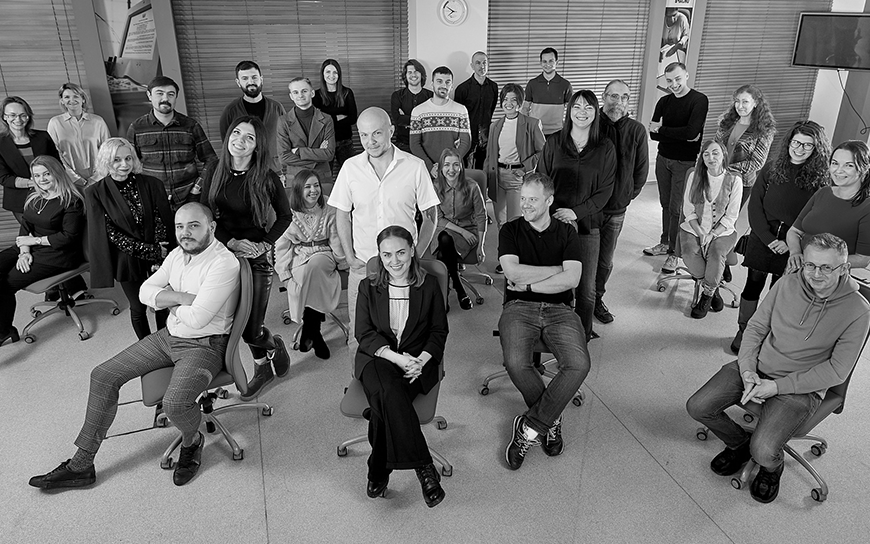 “In the past we were a media for businesspeople, but on 24 February, we changed our focus,” says Yulia Bankova, the chief editor of Liga.net, in conversation with EED.

“Our readers were only interested in the war. They wanted to know what was happening at every moment, where there were bombings, who was affected, how many victims there were, how to leave the country, how to move their business elsewhere. We were ready at 5am when the war began. We started to work immediately.”

For the first three weeks of the war, Liga.net produced short-format live news updates on the war, with the whole team and various volunteers focused on this work, some working out of Kyiv, and others from safer locations in the west of Ukraine or abroad, where they had fled. Many worked in difficult physical and psychological conditions.

After that period, the journalists returned to writing longer texts as well, but they still work around the clock publishing 70-80 live news updates each day, or a new piece every 15 minutes.

“There are so many stories about people who have fled from the war-torn areas and we try to publish them. We are now also publishing articles about how business has adapted to the war, and about the general economic situation of the country - the economic recovery, building, support for small and medium-sized businesses, technology etc. — there is a lot of such topics, particularly in time of war and after.” says Yulia.

Liga also publishes many explainer articles relevant to the over 10 million Ukrainians who have had to leave their homes and are still in Ukraine, as well as for those who have fled abroad, articles on finding accommodation, and where to find help and on new legislation, as well as on the armed forces and the special forces. Its coverage includes psychological advice for people affected by war trauma.

“There are so many things we need to write about, and we don’t have enough time or people. You need a lot of people when you work 24/7. A couple of our journalists joined the army and the territorial defence or are volunteers, and a couple can no longer work due to the overall trauma. But we have not let anyone go. We are still paying them,” says Yulia.

Huge demand from readership despite collapse in revenue model

This is despite a collapse in advertising revenue, which represented around 80 percent of Liga’s income prior to the war. An EED grant is currently helping the media cover its operational costs.

Yulia explains that Liga has around 50 journalists and editorial staff, as well as a small support staff, including a technical team, vital at this time when all Ukrainian media are a particular target of cyber-attacks and when reader numbers are sky high.

There is a huge demand for Liga’s news coverage from throughout Ukraine, with readers also from neighbouring Poland, and Russia. In March, the Liga.net site had 80 million page views, up from an average of 15 million in previous months.

Asked why so many Ukrainians rely on Liga.net for their news, Yulia explains that it has built up a reputation over more than 20 years as a reputable and independent media outlet, which employs independent and honest journalists. The media’s former editor, Boris Davydenko, was instrumental in much of this work.

“Unlike many other Ukrainian media, the owners of Liga.net have no political ambitions or interests. Liga.net is trusted by our readers with whom we have built very close links over the past years,” she says.

In the past Liga.net focused on a Russian-speaking readership, but in the spring of 2021, it launched the first Ukrainian articles. Since last October, the website is fully bilingual, with all material published in both Russian and Ukrainian.

With the outbreak of war, the team also launched an English language section, with live news also available in English, given the huge demand for news about Ukraine internationally. Liga.net is now providing free access to all their publications. “It is our duty to ensure everyone has access to that these days,” says Yulia.

EED first provided a grant to Liga.net in 2020, when the outlet faced challenges due to the collapse of advertising revenue during the coronavirus pandemic. The EED grant enabled Liga to continue the high-standard operations of the newsroom and to develop a strong sustainable funding model including subscriptions, membership and commercial partnerships options.

Despite this and some donor assistance, the financial situation for Liga remains precarious. With the collapse of Ukrainian business, the media’s owners are hoping that international business might take advertisements. They are also continuing to maintain relationships with Ukrainian business partners, many of whom have launched volunteer efforts to help civilians.

Working as a journalist during wartime

Few of Liga.net’s journalists had any previous experience as war reporters, and all journalists face constant danger when reporting from the warzone.

“We cannot just send our journalists into war zones. Our number one concern is their safety, and we only let those who volunteer go. It is difficult for everyone now, but our journalists keep working, from bunkers and basements, and from the metro when you could not go out on the street,” she says.

Yulia admits too that it can be challenging to fact-check information during a war, and this can also mean that stories are not immediately reported. “We heard about women being raped, but until we could actually speak to victims, we could not publish anything. That was very difficult,” she says.

Asked how she and her colleagues keep going, Yulia says they have no choice. “We cannot stand by and do nothing. It is hard not to be led by your emotions, but we try to concentrate on what is important for our society and our citizens. We must help people survive. We must provide information to help them. It is the knowledge that what we are doing helps others that means we can do our job,” she says.