Supporting the LGBTQI+ community in Montenegro

For the past nine years, Queer Montenegro has been the organiser of the Montenegro Pride march in Podgorica advocating for LGBTQI+ rights in the country. 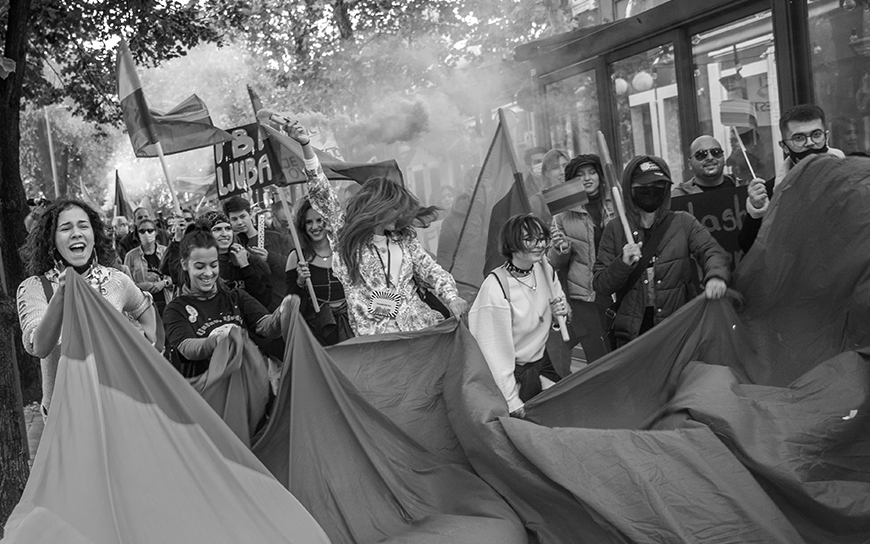 In October 2021, LGBTQI+ activists and friends marched in the Montenegrin capital Podgorica for the ninth edition of Montenegro Pride – the previous edition had been limited to a small car parade and online events because of the Covid-19 pandemic. More than 300 people came together under the slogan ‘Ljubav, ljudi’ (‘Love, People’).

“This was a call for action in times of crisis. Love is the solution; love is everything,” says Vojin Ćetković, public relations officer of Queer Montenegro, one of the organisations behind Montenegro Pride in Podgorica. “But love is also revolutionary, it is rebellious. They can take our rights away, but never our love.”

The approval of a law allowing same-sex civic partnerships in 2021 was an important victory for the LGBTQI+ community in Montenegro. This is currently the only such legislation in the Western Balkans. According to Ćetković, there are still gaps in the legislation, such as getting a partnership registered abroad recognised in Montenegro, as well as in its implementation. A lack of political will has also meant that legal gender recognition reform is not progressing. According to ILGA Europe, there has been an increase in anti-LGBTQI+ rhetoric among politicians, and hate crimes are considerably underreported.

“This is why the real work is done in-between Prides,” says Ćetković. “The Pride march itself is more of a celebration for the community. But it’s also a meaningless celebration if we don’t use it to ask for specific things. The march sets the advocacy agenda for the year.”

Each year, from February to October, the Montenegro Pride organisation board works to develop the Pride march concept, in a constant conversation with the LGBTQI+ community, to understand their needs and the problems they face.

The organisation has a large number of volunteers who help with fundraising, work on messaging, marketing, as well as the programme of Pride Week activities. These can include art exhibitions, movie screenings, and workshops. “It’s hard to get everyone to agree on one topic, but once it’s decided we all stand behind it, because it comes from the community,” says Ćetković.

A group of communications experts, including Ćetković, then develops a strategy to communicate the main messages to the LGBTQI+ community and to the wider public, to educate them and make them understand the issues faced by queer people in Montenegro.

“Attitudes are changing, particularly among youth. This year, we had many high-schoolers volunteering, which is important because it means young LGBTQI+ people can have mentors and role models within the community,” he says. “We also had quite a few straight teenagers coming to educate themselves and support their LGBTQI+ friends. Younger generations are more aware and more willing to fight for their rights, and this gives me hope.”

Queer Montenegro organises the Pride at the LGBTQI+ drop-in centre in Podgorica. Established in 2011, the centre provides educational resources, access to contraception, information on HIV prevention, and psychological support, and is space where the community can meet and organise. It is run by its founder organisation, NGO Juventas, together with Queer Montenegro, trans-led organisation Spectra and queer women's organisation Stana.

Ćetković admits that it is easier to run these kinds of initiatives in Podgorica, as it has a larger LGBTQI+ community and people are more open. He notes that many people travel from other cities in Montenegro to take part in Pride, and that inspires them to do more in smaller, more conservative communities. 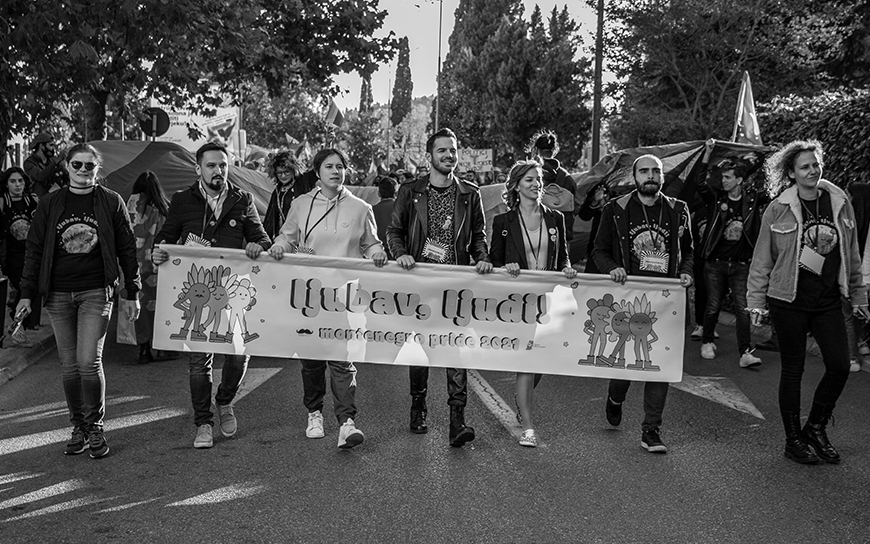 The impact of the Covid-19 pandemic on the queer community

The onset of the Covid-19 pandemic two years ago had a considerable impact for the LGBTQI+ community in Montenegro. Many found themselves jobless, with no food to put on the table. Others had to leave the capital and go back to more conservative hometowns, and often abusive home situations. Queer Montenegro, together with other NGOs, ramped up its pre-existing food distribution programme, which before the pandemic was directed at people who had been kicked out of their homes, to help those members of the community who faced economic difficulties.

Weekly online meetings for the organisation of Pride also helped maintain a sense of community, particularly for those members who had to leave Podgorica, and found themselves isolated. Social media also played a big role in connecting the LGBTQI+ community during this difficult period.

Covid-19 also meant that many international donors shifted funding priorities to mitigating the consequences of the pandemic, leaving little funding available for projects focused on LGBTQI+ rights. It was in this context that EED provided much-needed emergency funding for the organisation.

“Our work is still mostly volunteer-based. Money is not and has never been our main motivation, but at the same time we need it to survive. For some of our staff members, particularly those who are trans, working for an NGO is really the only type of job they can hold without facing discrimination,” says Ćetković.

Queer Montenegro’s plans for the future

Today, Queer Montenegro is focused on finding more stable funding and on making Montenegro Pride self-sustainable in order to better serve the LGBTQI+ community through advocacy campaigns. They also plan to continue spreading their message more widely, through links to other civil society groups in Montenegro and LGBTQI+ organisations throughout Europe.

“Our job is not done yet, Montenegrin society is still evolving when it comes to acceptance and support of LGBTQI+ individuals,'' says Ćetković. “Recently there has been an increase in hate speech and hate crimes towards our community, not just in Montenegro but in the rest of Europe. We can also see a shift in society towards acceptance and I am very happy when a young queer person tells me that their family immediately accepted them and that they can hold a job without facing discrimination. These are the stories that are worth fighting for, because they give me hope that one day this will be the norm for LGBTQI+ people in Montenegro and elsewhere.”