Equity and Empowerment organises training sessions and workshops to empower women in northwestern Syria, encouraging them to play an active role in public life. 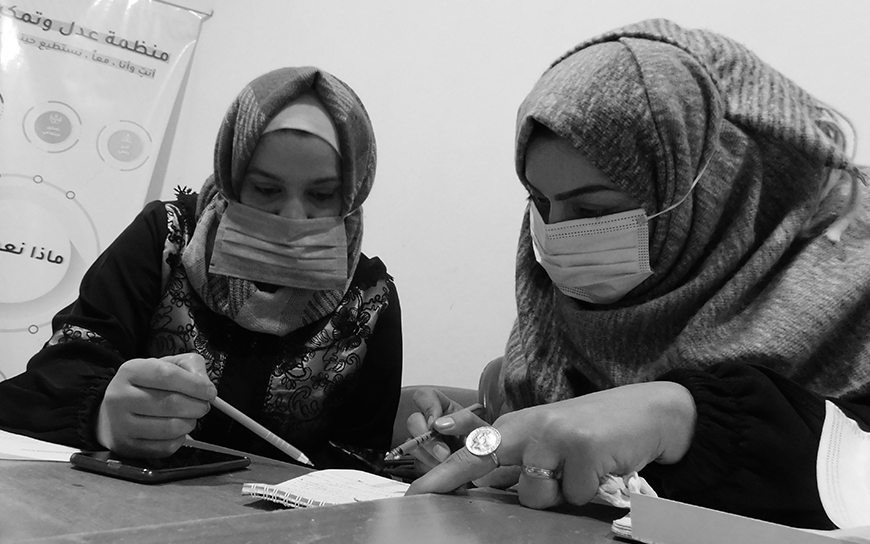 As Syria remains ravaged by conflict and widespread instability, it is perhaps inevitable that the international donor community is focused on providing humanitarian aid to the 11.1 million people, or 88.3 percent of population, who are in need. Hiba Ezzideen Al Haji, co-founder and CEO of Equity and Empowerment, emphasises that one of the problems of this blanket approach is that it risks ignoring other real needs, such as the those of Syrian women.

Al Haji emphasises that she and the other co-founders of Equity and Empowerment, who live in Turkey as she does, as well as two Syrian-based colleagues, would all define themselves as feminists. As a group they felt that this lack of emphasis on women’s needs is problematic. “It’s important to put women’s needs in the picture. When we discuss topics like periods, early marriage and blackmailing, these issues are never a priority in a purely humanitarian approach.”

Al Haji and her co-founders believe that if women are not present in the public sphere, as is the case in the Hayat Tahrir Al-Sham (HTS)-controlled region in the north of the country, their voices are unheard, they are politically disempowered and can play no part in the building of peace and political processes. With this idea in mind, the women conducted their first focus group with minority Druze women in the summer of 2019.

“It struck us that they had no understanding of their needs as women. They just saw themselves as members of the overall Druze community. We realised too that we needed to try to bring different communities of women together, to bridge the gaps of 10 years of war, and to empower these women to be active within society,” she says. A native of Idlib, Al Haji was also aware that women’s political empowerment is a sensitive topic in the region's traditional society. 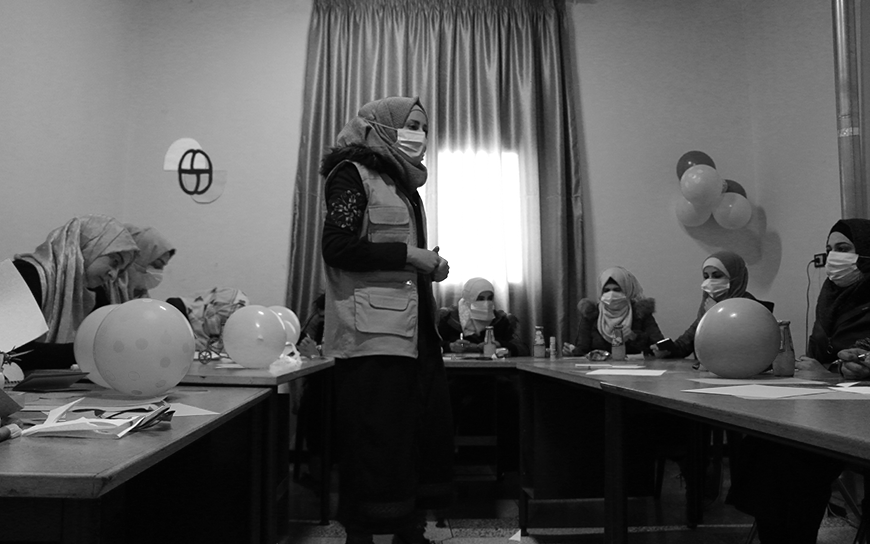 Bringing Sunni and Druze women together

In 2020, with Equity and Empowerment now officially registered as an NGO in Turkey, Al Haji and her colleagues carried out further focus groups with over 600 women to understand the causes of violence against women refugees, and they released two reports based on their findings.

It was thanks to EED funding that they were able to launch their first project in Syria that brought 20 Sunni and 20 Druze women together for the first time for a training project focused both on educating the women about democracy and their democratic rights and assisting them in practical ways. This included improving their digital literacy and cyber security knowledge and helping them to fix and update their own electronic devices, so that these could not be manipulated by outsiders, usually men in mobile phone shops who frequently stole data and photographs to blackmail women. They also helped them train for new careers, such as visual journalists, that are typically male professions in this society.

“Our initial object was to create a dialogue between these women and to build trust. We quickly noticed that they began to interact with each other on Facebook, to invite each other to their homes, and to engage with other women outside the initial group. Our project was the first step towards normalising relations between women from these two communities,” she says.

Six months later, the women who participated in this first project were part of a group of 100 women from Idlib who addressed a letter to the UN Special Envoy that was then quoted in the Security Council. “This was a significant moment for us; for the first time, their voices were really heard,” says Al Haji. 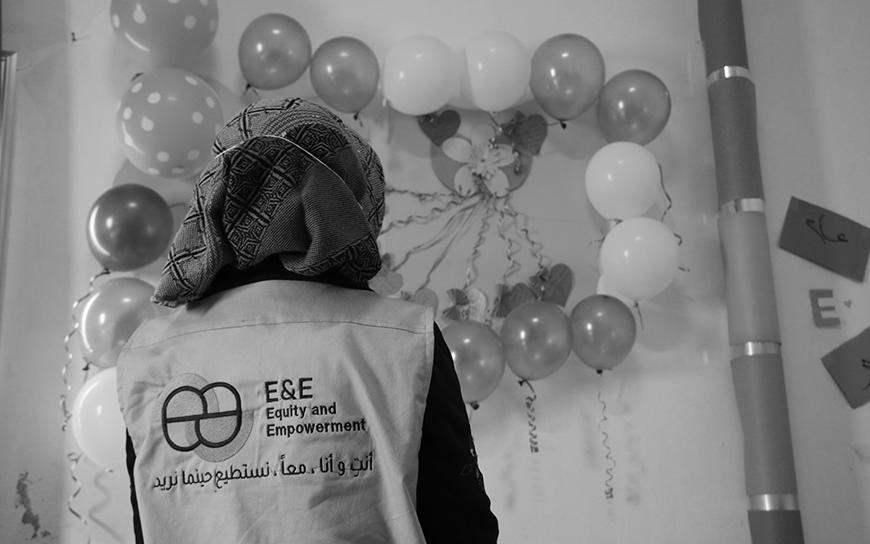 Now in receipt of a second EED grant, Equity and Empowerment continues to work in Idlib on engaging women in local government, “not only as employees,” as Al Haji states, “but as advocates who make sure their voice is heard, and help encourage more women to be politically engaged and to work within civil society.

“We want to make sure there is a real connection between grassroots and political actions. Very few women are interested in what is happening politically but the risk of that is political parties will negotiate agreements without considering women’s rights,” she explains.

When asked how she manages to engage women despite traditional attitudes, Al Haji says that they often remind the women of famous Syrian female leaders of the past, noting the important roles they have played in the country's history.

Another project that Al Haji is funding out of her personal finances is the ‘Horizon Project’ which encourages women to learn to drive.

“Our staff, who are mainly women, found it difficult to get from place to place. They were harassed on public transport, and with HTS in power, it can be complicated if their driver is not a male relative. I bought a car and hired a trainer and now they are learning to drive themselves,” she says. 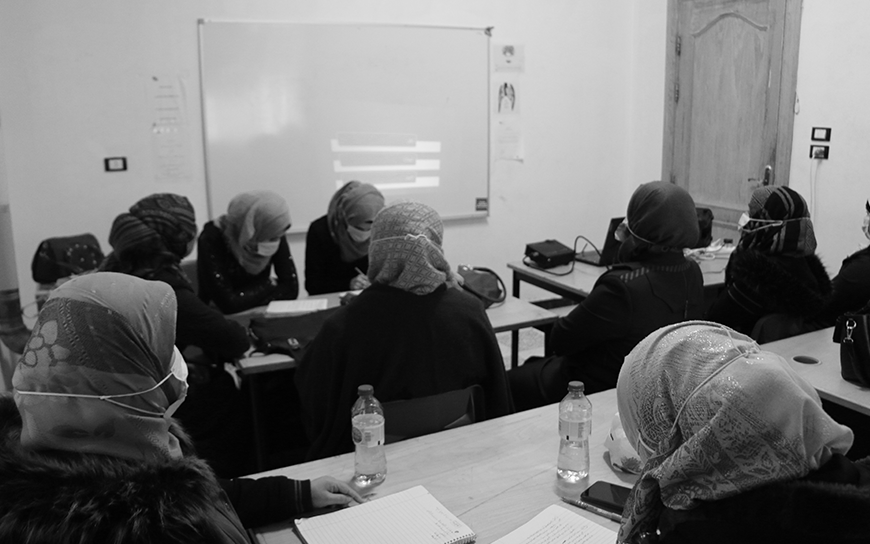 Working in a difficult context

Al Haji admits that North West Syria is a difficult place for any civil society organisation to operate. The Head of the Syrian Islamic Council recently referred to all feminists ‘as agents and spies’ and she is aware that authorities do not approve of the organisation’s activities, yet they are also aware of the upsides of this work.

“After attending our training, many women started to work and now they are now earning salaries and their husbands feel they are sharing the financial burden,” she says. She admits that the organisation’s links and deep understanding of the community’s culture and traditions help too.

The biggest challenge Equity and Empowerment now face is funding, with many international donors unwilling to support actions in the North West region due to the risk of HTS interference. EED’s core support is crucial in funding day-to-day expenses for the association, but Al Haji is determined she will continue to work regardless.

“We are working for a cause,” she says. She is considering crowdfunding, but admits it will be challenging with the ongoing humanitarian crisis. She is also thinking of founding a girls’ school where they will also teach the association’s curriculum for democratic citizenship. If it comes to the worst, she and her other co-founders will donate part of their salaries to keep the important work of Equity and Empowerment going.