A media platform specialising in visual storytelling is promoting debate and critical thinking among its readership with its in-depth coverage and analysis. 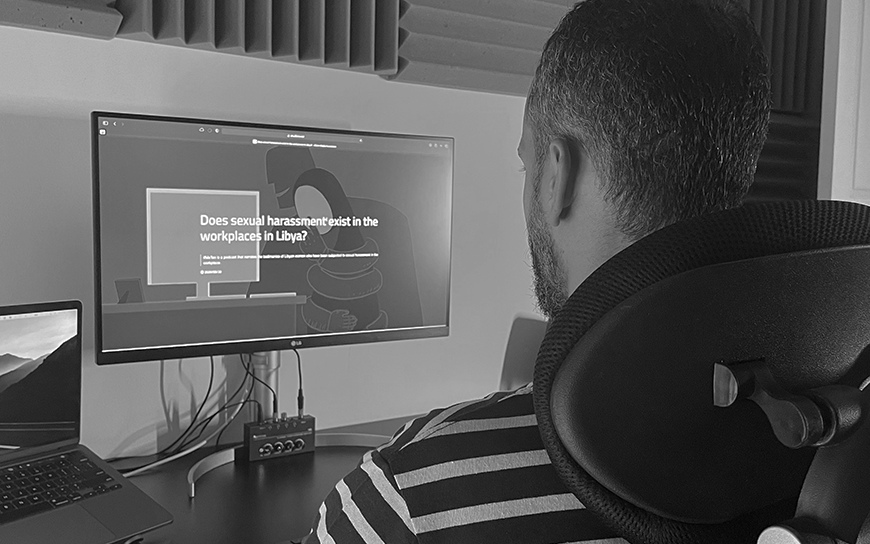 Ghady Kafala and Abubaker Albizanti are just two of the two million Libyans now living in neighbouring Tunisia, forced to flee their homes as rival factions vied for power and the country descended into civil war.

Albizanti worked as a journalist and Kafala is a writer by trade; both have experienced first-hand the dangers of working in Libya. Since the breakout of civil war in 2014, the country has become an increasingly dangerous place for journalists and writers to operate, with many attacks against the media by armed groups, and the ever-present threats of murder, abduction, arbitrary arrest, enforced disappearance and torture.

Despite living abroad, both Kafala and Albizanti felt they could still contribute to free speech at home. Convinced there was a gap for a media outlet promoting open debate and critical thinking among a generation deeply scarred by years of conflict, they were barely settled in Tunis when they decided to found El Biro, a local word for a ballpoint pen or biro. From the beginning they perceived El Biro as a media providing in-depth coverage and analysis of events and giving a voice to women and minority groups.

“We wanted to focus on human rights as these have collapsed in Libya; the years of civil war have taken their toll. Our vision was to develop a dynamic media that could have a real impact on young people, and that was not just focused on hard news, as so many traditional media outlets in Libya are,” says Kafala in conversation with EED.

Like many start-ups, El Biro existed initially thanks to the enthusiasm of its two founders, who secured a small start-up grant helping them to launch the platform. Perhaps reflecting Kalafa’s writing background, the emphasis from the beginning was on storytelling, relating news in a highly visual and attractive manner and using technologies new to the Libyan media landscape.

“What we are trying to do is to transform the concept of journalism by telling our stories using interactive content. Storytelling is central to what we do. When people read stories, they empathise with the people featured; they share their emotions and feelings,” she says.

There are now dozens of stories on both the Arabic and English version of El Biro’s website, many focused on the situation of women in Libya, with a series titled ‘Women in Need’ covering taboo subjects such as domestic violence, women’s rights and questioning the wearing of the hijab in the country. Others focused on marginalised communities, including the Berber and nomad peoples, and others on subjects such as the situation of the diaspora and of migrants in detention centres.

The articles are illustrated with photographs and line drawings and many include infographics. They are designed to be easy to read on-screen and visually attractive. The stories are researched and written by El Biro’s Tunis-based team and by their contributing journalists located throughout Libya.

A series of podcasts on women’s rights

Recently as part of El Biro’s ‘Women in Need’ series, the team launched a series of podcasts, financed by the EED grant.

“We decided to devote our first podcast to the issue of sexual harassment in work. This is not a subject that is ever spoken about in the Libyan media,” says Kafala. “Until now, many women felt unsafe sharing their experiences in public. They may be the victims, but society makes them feel like they are guilty too, or at least they are participants. None of the women interviewed for this podcast were identified by name as they were scared. In some cases, we also disguised their voices.”

Their second podcast is on the subject of abortion, arguing as Kafala relates, that this is not a luxury for women, but a personal healthcare issue. A third podcast is now in production focused on body shaming.

Podcasts are a relatively new media product in Libya, but they have become increasingly popular, according to Kafala. She admits too that not everyone is happy about the subjects that the El Biro team are broaching.

“If I am to be honest, most of the reaction we get is negative. People won’t accept any discussion about women’s rights as they consider it a direct attack on tradition. But we believe that even getting people to talk about these issues is progress. These are all new ideas for our society,” says Kafala.

She and Albizanti must be doing something right, as the outlet’s readership is increasing by the day. They currently have more than 23,000 followers on Facebook, nearly half of these women.

For the past two years, the El Biro team have also run a training project for citizen journalists in both Tripoli and Ghat, a town in the Saharan desert in the south of the country on the Algerian border populated by nomads, among the most marginalised populations in Libya. Run over three months, the programme teaches young people journalism techniques and each group of trainees produce content that is then published on the El Biro website and across their social media platforms.

Despite the recent cease-fire, Libya is still a challenging place to work. “It’s very difficult to produce content on Libya. Even holding a camera or a phone to film is dangerous. It’s hard to do journalism in a conflict zone,” admits Kafala.

Like many media outlets, El Biro depends on donor support for its ongoing operations. This has proved challenging in the past, for as a Libyan-led organisation the media was not able to register officially in Tunisia. Thanks to EED support, El Biro is now finalising the process of registering the media outlet in a European country and is putting in place an effective governance structure. They have also expanded the team in Tunis.

Kafala believes that with this registration and a re-organisation of the team, El Biro is now poised for future success. “Our main aim of course is to have the financial and human resources in place, so that we can be a strong and sustainable media. We’ve lots planned, including stories on private Islamic schools, on the black market in Libya and on the country’s infrastructure, as well as more training programmes. We are also exploring explainer videos on citizens’ relationships with the government that will look at issues such as corruption and transparency,” she says.