Dina Baslan and Aaron Williams are co-directors of Sawiyan, which supports and advocates for marginalised refugees in Jordan, including those of African origin. 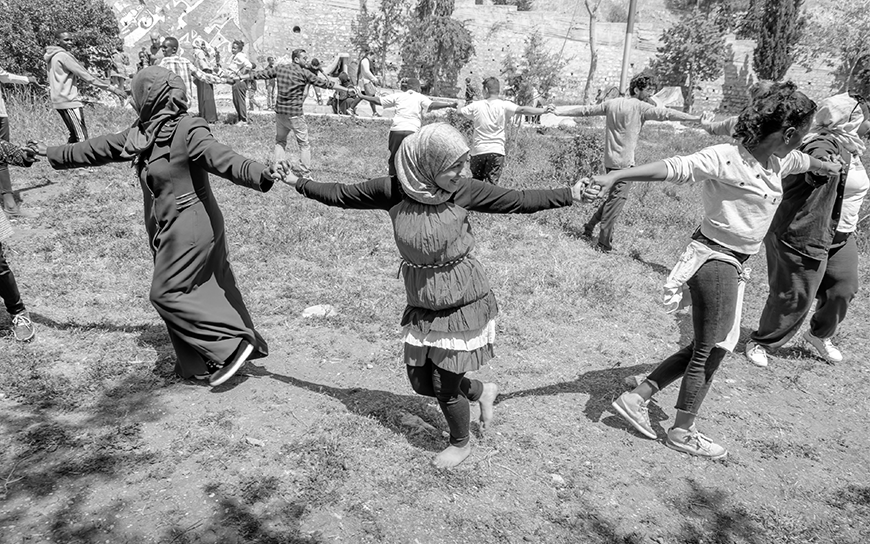 “One of our community leaders from Somalia has lived in Amman for the past ten years. He’s an engineering graduate and we always say he could be president someday. The problem is he’s over 30 so ineligible for any international scholarship. He’s stuck here and has no right to work. So far, no country has accepted him for resettlement,” says Dina Baslan co-director of the NGO Sawiyan, describing the fate of one of the many refugees of African origins in Jordan.

Jordan has the second highest number of refugees and asylum seekers per capita in the world. While international attention has typically focused on the half-a-million registered Syrian refugees, Jordan also hosts more than 20,000 refugees from Yemen, Sudan and Somalia. These ‘minority refugees’ have fewer legal rights, suffer poverty, have poor health conditions and in the case of the African-origin refugees, face endemic racism and repression.

Faced with such marginalisation, their closely knit social relations are a lifeline for many. “At Sawiyan we stand in solidarity with and support our communities. We try to help them improve their lives and to advocate for them. We want every community member to have the opportunity for a better future elsewhere,” says Baslan.

She notes that only one percent of refugees are resettled globally, with non-Syrian refugees having an even slimmer chance of being resettled, especially if they are single, as most are in Jordan.

Sawiyan is the first local organisation in Jordan to focus solely on these refugees. Its name can be translated from Arabic as ‘to come together, to meet your fellow man, to cultivate community, or equality’, all important principles of the Sawiyan ‘movement’, as Baslan calls it. 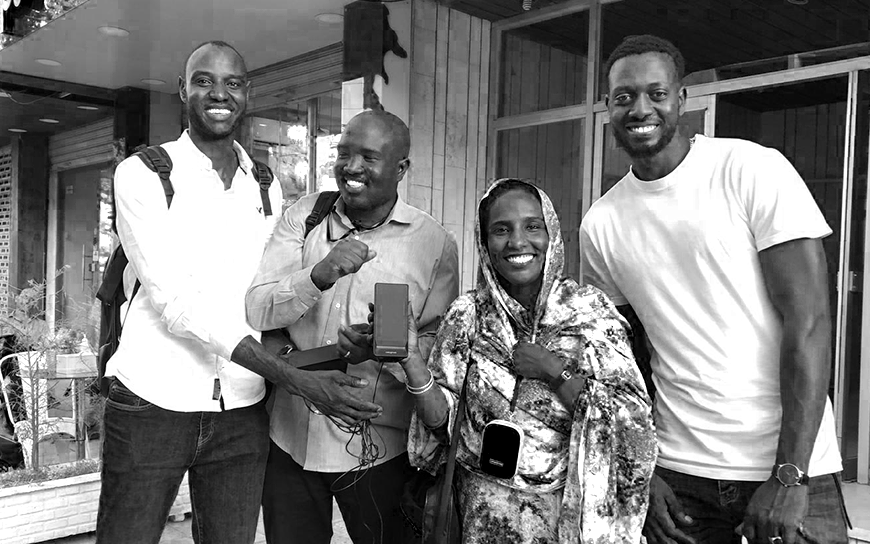 Amman: a challenging city for refugees

Life for all refugees is challenging in Amman, the most expensive city in the Arab world, and even more so for minority refugees. They depend on minimal monthly cash-assistance from the UNHCR for their livelihoods, only recently supplemented with food assistance from the UN’s World Food (WFP) Programme.

Unlike Syrians, who under the ‘Jordan Compact’ agreement can legally work, these refugees depend on informal illegal work and constantly risk arrest and possible deportation. Families have faced challenges in registering their children at school, although a 2020 waiver has provided temporary solutions after concerted advocacy efforts.

Baslan refers to 18 December 2015 as a life changing moment in her and her colleagues’ lives. For over a month, hundreds of Sudanese refugees had set up a makeshift camp outside the UNHCR headquarters demanding more support for housing, education and healthcare, as well as resettlement from Jordan. In the early hours of that fateful morning, between 500 to 800 refugees were forcibly rounded up and loaded onto buses to the airport.

“We were appalled. We had to do something,” she says. A group of grassroot activists came together, including Baslan and her co-director Aaron Williams, to work with the refugees. They were determined that minority refugees should be included in the refugee response plan in Jordan.

Three years later in 2018, Sawiyan was registered as an official NGO, a decision led by the desire to advocate more publicly about the refugees’ situation, with many of the initial volunteers taking positions on its board. “The grant we received from EED enabled us to exist as a real organisation for the first time,” says Baslan.

Williams acknowledges that over the past years, Sawiyan has made a real impact to the refugee response in Jordan.

“Early on, we carried out a rights-based needs assessment report on minority refugees which became a guiding document for humanitarian actors and donors seeking to better understand the vulnerabilities of non-Syrian refugees. We presented it at a roundtable on the growing vulnerability of non-Syrians, and this caught the attention of the World Food Programme. In 2019, non-Syrians were finally included in the Comprehensive Vulnerability and Food Security (CVFS) assessment for the first time.” 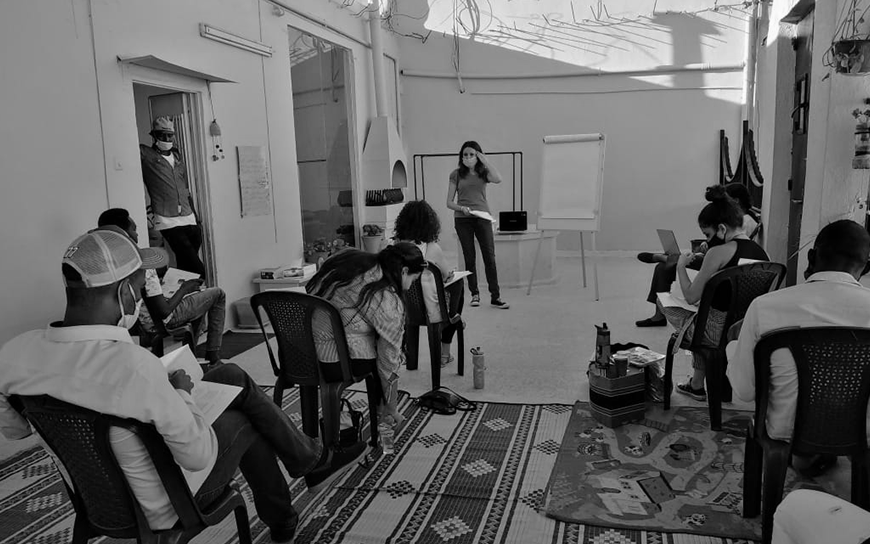 Sawiyan has developed its profile in advocacy, community development, research and training, its strength built on the trust it has nurtured and developed with refugees. It has become a leading voice in inclusive humanitarianism and in tearing down key barriers to assistance facing minority refugees and asylum seekers living in Jordan.

In 2019, the organisation helped lead the founding of the One Refugee Approach Working Group of thirty-plus humanitarian organisations, which ensures that the humanitarian response focuses on refugee vulnerability rather than nationality and that all programming abides by humanitarian principles.

This advocacy work meant that non-Syrians were included in WFP’s food assistance for the first time in 2020, and that they are now prioritised in annual work plans and for funding.

All advocacy is informed by Sawiyan’s rights-based research produced in partnership with the refugee community. Sawiyan is now working to develop a Community Research and Advocacy Team of refugees, asylum seekers, and members of the Jordanian host community.

In 2019, community volunteer teachers established an English language teaching programme popular with Sudanese and Somali refugees, where teachers from the community are paired with native-English-speaker assistants and the curriculum is focused on racial empowerment. During the Covid-19 period, these classes were given online, enabling communities outside Amman to access them for the first time.

This year, Sawiyan teamed up with Seenaryo, a leading specialist in theatre and play-based learning to produce ‘House of Hope’, a play and short film bringing together 22 Jordanian, Sudanese, Yemeni and Somali woman from Amman in a ‘democratic collaboration’ to create a devised theatre piece giving voice to the real day-to-day issues they face.

Success despite a difficult environment for non-governmental organisations

Both Williams and Baslan admit Jordan can be a difficult environment for independent NGOs. All foreign funding requires official government approval, which is highly dependent on political contacts or wasta as it’s called in Arabic. “We’re learning by trial and error how to go about a very obscure process,” Baslan sighs, noting that in 2019, it took Sawiyan nearly a year to access a two-year grant.

Despite incremental changes in recent years, there is still much work to be done. The ‘One Refugee Approach Working Group’ is focusing on this work and has established a new advocacy subgroup, which produces annual situation reporting on the ongoing gaps in humanitarian support and on the overall status of principled humanitarianism in Jordan.

After 13 years in the Middle East and North Africa, Williams will shortly move on from Jordan and will step down from his role in Sawiyan.

“I will remain on the Board,” he says. “This work has been transformative for me and for everyone in the Sawiyan family. We want to help these communities; so many of them are desperate to advance their lives. We’re committed to this work, but running a locally registered organisation can be complex; and sustaining our financing has become even more challenging in the Covid-19 context. That said, our experience of working with EED demonstrated that with a small amount of money, we can get so much done.”