FEATURE-Transgender Armenians stitch and sew their way out of prejudice

EED partner from Armenia Right Side NGO was featured in Thomson Reuters Foundation News. The article by Anna Pujol-Mazzini provides an account of struggles troubling transgender community in one of the least LGBT tolerant countries and the efforts by resolute activists to turn the tide for the trans individuals in Armenia. 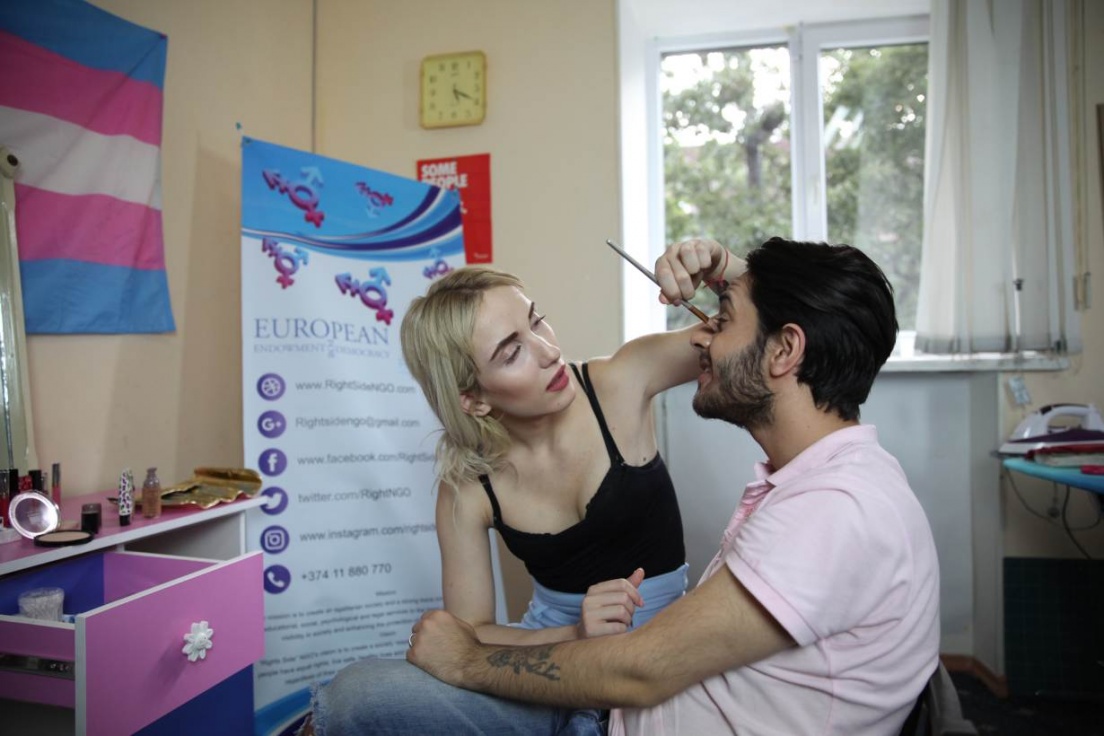 This article below authored by Anna Pujol-Mazziniwas reproduced courtesy of Thomson Reuters Foundation. See the original article in here).

Armenia is one of the least LGBT-friendly countries in Europe

YEREVAN, Oct 2 (Thomson Reuters Foundation) - When she was 14, Lilit Martirosyan decided she wanted to start earning money for herself. But finding a normal job was complicated - employers didn't like the way she looked.

So, like many transgender women in Armenia, she started selling her body to older men instead.

During her years as a sex worker, Martirosyan, 26, was beaten and threatened with a knife several times. Eventually, after eleven years of sex work, she decided to stop selling herself and start helping people like her instead.

"Transgender persons face discrimination and violence in the family, at school; they usually leave school at a very early stage," she told the Thomson Reuters Foundation in her office in Armenia's capital, Yerevan.

"Those who are very strong continue their studies at university, but there is more discrimination there - so they leave university as well," she added, revealing tattoos on her arms as she fiddled with her long, blonde hair.

"That's why they are engaged in sex work: they don't have enough education to work and be competent in the labour market."

To curb that trend, activists are organising workshops to teach transgender people sewing and makeup, and help them find employment in the fashion industry, which they say is one of the most inclusive in the Armenian job market.

Armenia is one of the least LGBT-friendly countries in Europe, with only Russia and Azerbaijan ranked worse for lesbian, gay, bisexual and transgender people, according to advocacy group ILGA-Europe.

In a 2015 survey by PINK Armenia, an NGO that helps the LGBT community, 91 percent of Armenians said they did not know anyone who was gay, lesbian, bisexual, transgender or intersex.

After Yerevan's only LGBT-friendly bar was burnt down in 2012, Eduard Sharmazanov, a spokesman for Armenia's ruling party, called the attack "right and justified" as supporters of LGBT rights were "defaming the Armenian national identity".

While gay, lesbian and bisexual people can hide their sexual orientation, transgender Armenians say their physical appearance makes them recognisable and more likely to encounter discrimination, bullying and physical attacks.

Many are afraid to go out by day and cannot find education or work. So they rely on sex work in the evenings to survive.

Drawing on her experience, Martirosyan founded Right Side last year, which she says is the only organisation in the Caucasus region focusing on transgender issues.

The group campaigns for equal rights for people regardless of sexual orientation or gender identity, it says.

In one corner of the organisation's large community space in Yerevan, fashion designer Agnes Malkhasyan is showing her pupils how to sew stitches on a piece of red material using a machine.

Armed with measuring tape and white chalk, she draws patterns on the fabric, marking the spots she will have to sew over, as her pupils look on attentively.

Malkhasyan is keen to help fellow transgender people learn sewing - a job where one can easily make money without having to leave the house and risk abuse.

She says attitudes are improving.

"Years ago, if they saw a transgender person on the streets people would scream: 'he's a boy,' would discriminate or beat them. Now they are a little more indifferent, more accepting."

Still, she admits she is sometimes scared of going outside, and has not told her employer about her gender identity.

Over a period of three months, pupils will learn how to make their own clothes. At the end of the course, they will be briefed on how to handle job interviews and put in touch with transgender-friendly employers.

The sewing classes - along with makeup and IT courses - are the first of their kind in the country.

Martirosyan, who heads Right Side, is working on a map of potential future employers for her trainees. So far, only two beauty and fashion companies have agreed to employ transgender people.

While the employment prospects might be bleak, trainees say the workshops provide a safe space.

"It was one of my dreams to be able to sew and now I feel that it's getting real," Kira Schwarz, who identifies as gender-queer, told the Thomson Reuters Foundation after finishing her stitches.

"Here, people can be free as they are and no one will judge or criticise. Here you can be yourself."