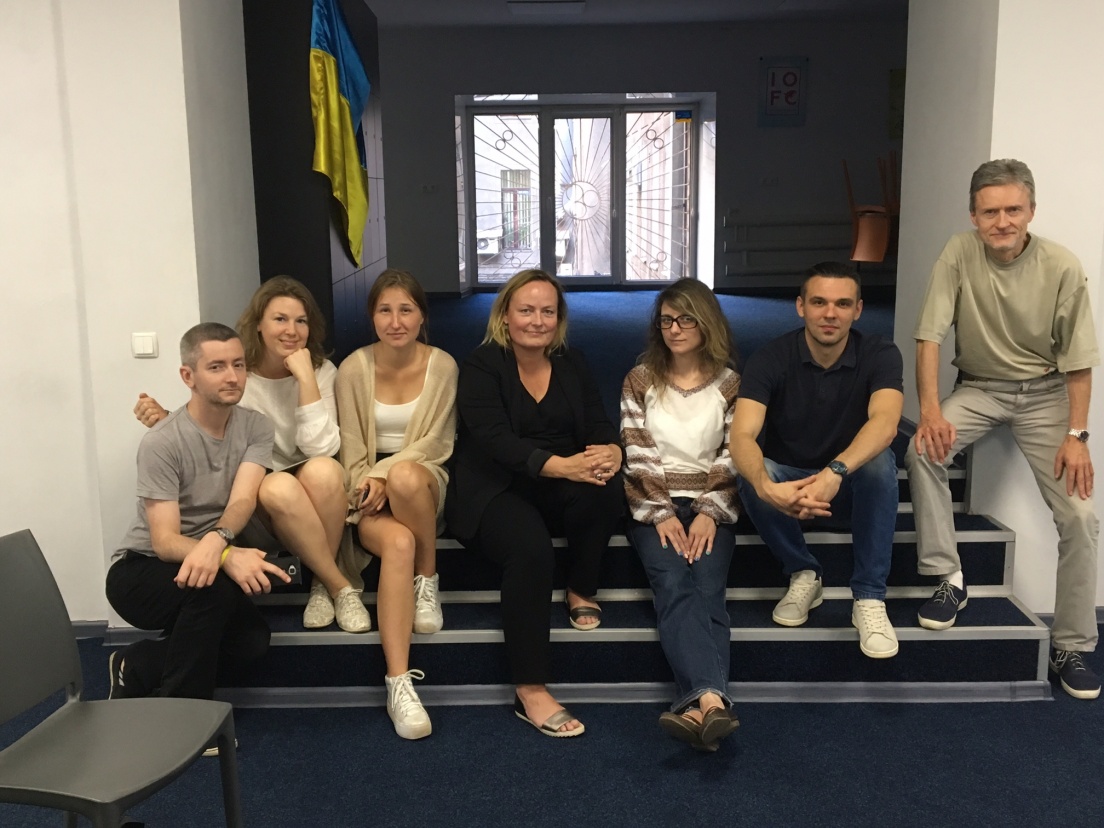 "I have been so impressed with all the dedicated and determined activists I've met, working tirelessly since the Maidan revolution to improve the lives and rights for all in Ukraine."

You have many years of civil society experience, having managed several humanitarian organisations and programmes. What struck you most about the current context for activists and civil society in today’s Ukraine?

Despite the difficulties on the ground, I was impressed to find a large, thriving and highly professional civil society working on diverse issues and activities. Civil engagement is still a relatively new concept in Ukraine. This creates both new opportunities for ‘ordinary’ citizens to engage and take action locally, while at the same time tests their resilience in view of the resistance and mistrust they experience from, for example, local authorities.

It is difficult to predict when the tipping point for change takes place and when a collective shift of truly transformational change sets in. However, one thing is clear: the drivers of change are the people, the civil society activists, reformers and ordinary people who support them.

What would you see as the greatest challenge facing civil society in Ukraine?

In a word: corruption! The (anti)-corruption agenda is present in nearly all aspects of people’s life, and I witnessed at first-hand how the organisations fighting corruption are increasingly being targeted and restricted in their work and actions. Many of our partners are now confronting pressure, intimidation and even physical violence.

I met with Dmitry Bulakh, who is an elected official in Kharkiv Regional Council and head of the EED-backed Anti-Corruption Centre (KAC), which exposes corrupt practices and the notorious abuse of public finances in Kharkiv. Several weeks ago, Bulakh was severely beaten on his way to work, attacked in broad daylight by two unidentified men. Fortunately, he recovered quickly but this is a stark reminder of the increasingly hostile environment facing anti-corruption activists, journalists and reform officials in Ukraine.

Cases like this demonstrate the risks to life for these activists, who face a reality shaped not by the rule of law, but the rule of force. The outcome of Ukraine’s protracted domestic battle with corruption will ultimately define its future.

How is EED helping to support the drive for change?

EED provides support to grassroots civil society organisations and political activists in many different corners of the country. We also provide much support to promoting independent media and we see many of our partners, taking risks and changing their communities through their work and exposure. Our mission is to provide support even when considered politically sensitive or risky.

I was particularly struck by our visit to the city of Kharkiv, Ukraine’s second largest city. Only 40 kilometres away from the Russian border, Kharkiv has a rich ecosystem of EED grantees who serve as important ‘change agents’ in their community. This can be considered one of EED’s successes in Ukraine.

The Kharkiv grantees have shown how inspiring stories of local change can capture national imagination – such as winning court cases against Henadyi Kernes – the incumbent mayor of Kharkiv, renowned for his corruption and intimidation of activists. Many of them are young and gaining important experience, and helping each other out, for example through leveraging media. Persistent efforts by EED in our outreach in this region has contributed to developing this critical mass. We now see a growing network of local reformers who are learning how to win support from the local population and withstand pressure from the top.

I met many inspiring activists. One of those was Lesia Vasylenko, a determined young woman and lawyer who left the private corporate world to devote her time to fighting for the rights of veterans of the war in eastern Ukraine. Now in its fourth year, challenges in the Ukrainian army persist. Vasylenko established an NGO, Legal 100, to ensure that no soldier falls through the cracks.

Out of around 300.000 veterans, some 20.000 have been wounded and disabled and find it extremely difficult to receive the pensions and support they are entitled to. EED provided support to the NGO and help, in particular, to the women within the defence forces who are not recognised as combatants and therefore receive a smaller pension than their male colleagues, even though they have been fighting side by side.

And finally, did you return with a sense of optimism for the future or frustrated by the slow pace of change?

Ukraine is at important fork in the road: it is not fair to think about fatigue when Ukraine is going through transformation change of its generation. Many of the activists told us that despite the exhaustion, they are not giving up and that the energy for keeping the post-Maidan momentum for change is still there.

Change is painful and can take a long time but we need to stay the course. We have a duty to support people and not expect dramatic change to happen overnight. But from what I saw, and in particular, from the fearless and inspiring activists that I met, I am confident that the seeds are being sown for a positive future.