“Operation Cesar”: What Accountability for International Crimes in Syria?

Cesar is the code name for a former photographer of the Syrian military police. From 2011-2013 Cesar took 45,000 pictures of detainees tortured to death from prisons in central Damascus. 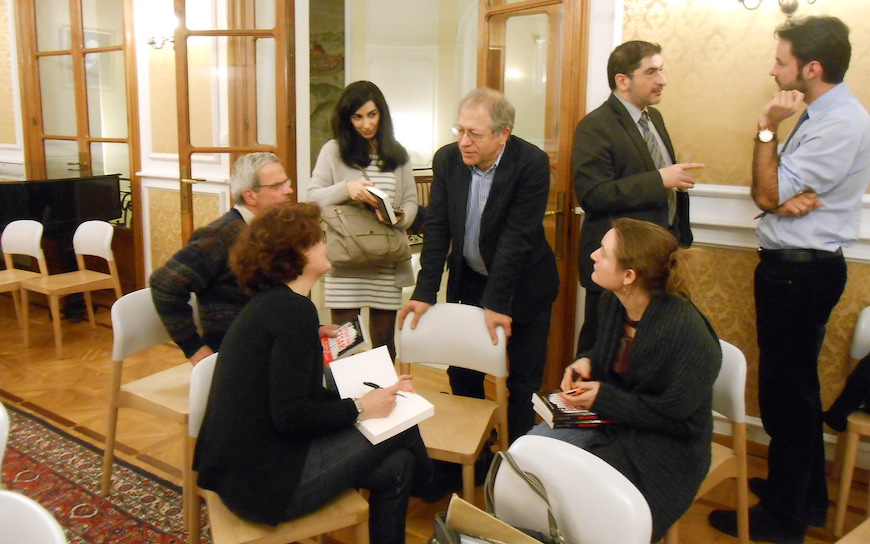 A book on his story – without the pictures – was published in October 2015. Garance Le Caisne, the author of the book “Operation Cesar: at the heart of Syria’s death machine” was invited to tell Cesar’s story at EED. Around 70 people participated in a discussion about crimes against humanity perpetrated in Syria and how international justice could address them. The head of Syrian NGO Dawlaty, an EED grantee, and the Commission for International Justice and Accountability were also on the panel of this event organised in cooperation with Action Syrie.


“Syrians who are suffering are real people whose voices must be heard”, Le Caisne described her motivation to write the book.

“Despite being about human horror, it is a profoundly human book.”

She describes the exceptional testimony of Cesar who smuggled thousands of documents out of the country to show the world how prisoners are tortured to death in Syrian prisons. She speaks of his courage and how he risked his life. Yet he is only “one of so many risking their lives” to shed light on the regime’s atrocities, Le Caisne places his story in the larger frame of Syria today.

Mustafa Haid, president of Syrian NGO Dawlaty, described that once the “Cesar report” went public, mothers used the pictures to identify their children, as it was the only information they had access to. “Every single picture has a family’s story behind it,” he highlighted. Haid’s own family is still living in Atareb (West of Aleppo), bombed on 14 February 2014, what is now called “Atareb Valentine”.

Haid also expressed frustration of Syrian civil society at the world’s trend to ignore justice in order to achieve peace. “But we are far from either: the number of crimes in Syria have drastically increased since 2011, yet there is no action - no progress to pave the way to transitional justice and accountability”, he stated. “We have war journalism, but we don’t have justice journalism,” Haid explains the media’s superficial coverage of crimes and accountability in Syria’s war. He highlights the work of Syrian civil society including “citizen journalists” who are using “amazing technology” to get information and images out of the country – to show the world what is going on.

Nerma Jelacic, Head of External Relations at the Commission for International Justice and Accountability called for more support to Syrian civil society: “it is important to build the capacity of Syrian activists to become national crimes investigators.” Nerma highlighted the legal value of the ‘Cesar report’: “such documentations are crucial to build cases for courts such as the International Criminal Court (ICC)”. Finally, she called for patience, noting that justice for crimes perpetrated in former Yugoslavia where she comes from, is still ongoing 24 years after the war. With crimes better documented, can we hope for a shorter process of justice for Syria, when it starts?

Jerzy Pomianowski, EED Executive Director highlighted how the speakers’ work is giving “a voice to Syrian civil society, which is struggling to achieve freedom in their war-torn country”.

Action Syrie is a community group determined to break the silence about the massacre of the Syrian people.

The event was followed by a book signing with Garance La Caisne.