Women Leaders: The solution to peace and security 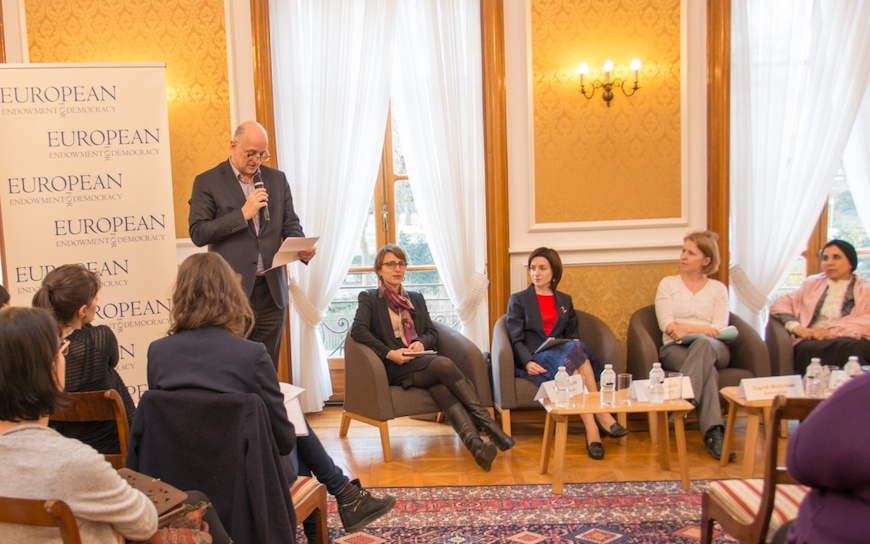 Moderated by the journalist Sigrid Melchior, the panel focused on women’s role in rebuilding societies. Four women, from different countries but with similar challenges, shared their stories that brought them into politics.

“When I joined the Moldovan Government, as the Minister of Education, I was feeling a lot of pressure, both because I was young and a woman.” – shared Maia Sandu, former Minister of Education and now the leader of the new Party of Action and Solidarity and a President of the Forum for Transparency, Involvement, Unity and Change.

In her previous role as Minister of Education in Moldova, she took the lead in reforming the educational system, at a time when many vested interests were against better governance and accountability, especially in the way the education budget and property were managed. “When I started, there were almost no proper documents to justify the spending of the education budget. That was 7% of the GDP” she said. She also took on eliminating cheating in the Moldovan national school-leaving exam. These reforms made her unpopular at first, but afterwards brought significant results. During 2015, when Moldova had three short-lived governments, she was the popular choice for the Prime Minister’s job with a platform of fighting corruption beyond the education sector, but the oligarchic parties blocked her nomination. All these challenges at one hand, and public support on another, encouraged Maia to start a new party, with the mission to reform the country. 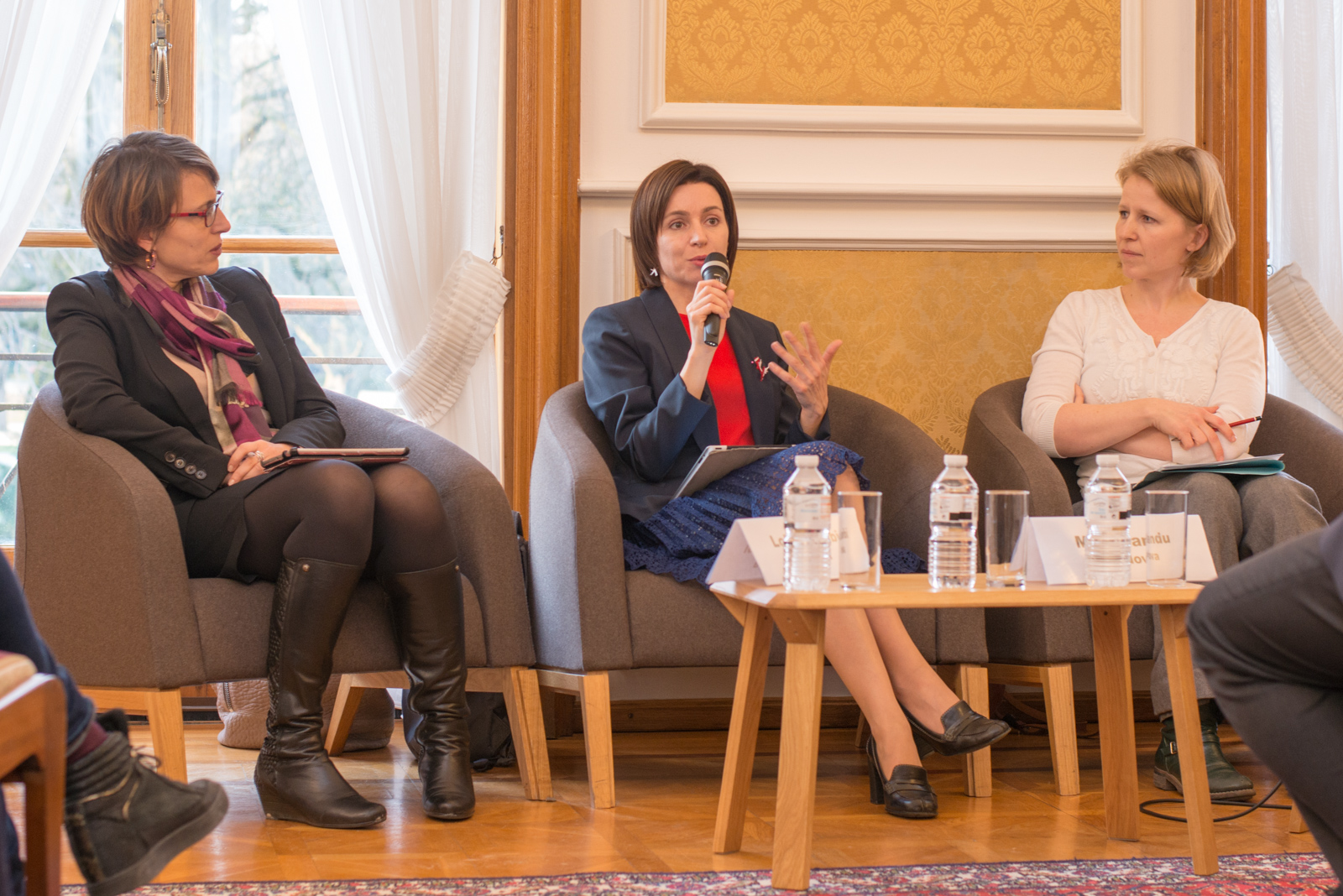 Lobna Jeribi from Tunisia is the founder of the Initiative Solidar Tunisia. After the Arab Spring in Tunisia, she was elected to the Parliament and became vice president of a Commission dealing with the revision of the Constitution. During her mandate, new articles regarding women’s rights were introduced to the Constitution, which made her very proud. Currently, as the founder of Solidar Tunisia, she tries to give a stronger voice to civil society. “I created this NGO because we have to use the bottom – up approach and civil society needs to be the driving force in the reform process.” – she said. “A major structural problem we have to deal with in Tunisia is women’s employment or the lack thereof. We should use positive discrimination to assure that women have their voices heard and achieve equality in both employment and entrepreneurship.” – she added.

Zana Marjanovic is a member of the multi-party parliamentary Women’s Caucus of the Federation of Bosnia and Herzegovina. She left Bosnia as a child, but returned back home to study art and filmmaking. Playing the lead role in “The Land of Blood and Honey” - a film about Bosnian women who survived sexual violence, directed by Angelina Jolie, significantly influenced Zana.. “The film was very personal, because we had a big responsibility towards all the women who were victims of war crimes, I would even call them survivors.” After some time, Zana decided to go into politics, because she wanted to do more than just acting and help rebuild her country after the war. She now sees herself as a socially engaged artist. “My experience in Parliament showed me how little is done towards women’s equality. In the first year, I was the only woman who spoke, the only one who sat in meetings.”- she shared.

“In post-conflict countries, while talking about peace and security we cannot underestimate women’s power and how this affect equal participation– that’s how we move ahead and build a democratic society.” – Zana argued. 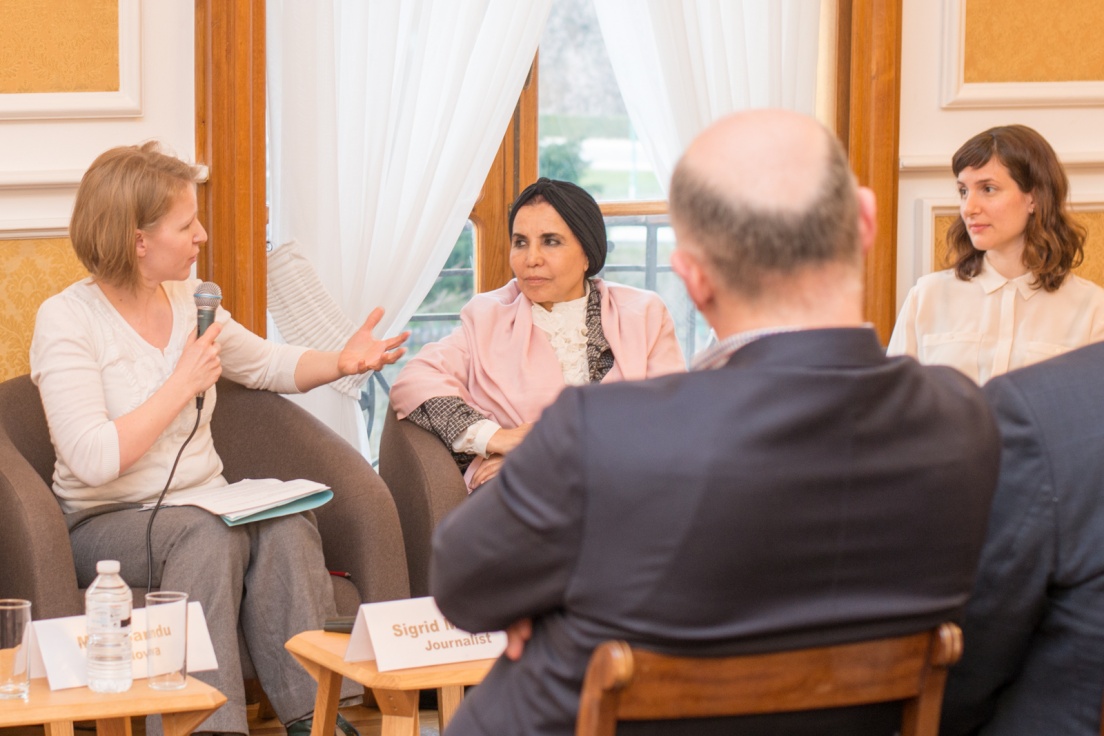 Fatemah Bagi, an elected member of the Tripoli Municipal Council is an outspoken political activist who has worked to strengthen human rights, freedom of expression and democracy. As a teacher, she worked in both Libya and Sweden. When she returned to Libya from Sweden, she started a women’s political party, which became first in the elections. Currently, as a politician she is working to eliminate corruption and rebuild Libya. She deplores that it is very difficult as a woman to be active in politics: “Women and young men should take an active role in rebuilding societies. But current political elites in Libya do not allow women or young people to step in, there is only one woman in each municipality and this is only done to show to the Western word: we have democracy.”

The event closed with Miet Smet, Belgian politician for the Christian Democratic and Flemish party, receiving a “10 for 10” award from IRI WDN. The award is offered to mark 10 years anniversary of IRI WDN. Smet is one of ten dynamic women around the world who receives this award, which is offered to those who best embody WDN’s mission to increase women’s leadership in public life. Miet Smet shared her experience of working in the parliament and implementing legislation to fight sexism and promote women’s rights.