EED anniversary: “Democracy is not just something written on a piece of paper – it is a living organism”

On 30 June, European Endowment for Democracy celebrated its three-year anniversary. Since 2013, EED has been working to support civil society actors and democracy activists in the European neighbourhood and beyond. During this time EED has funded 333 initiatives in over 20 countries. 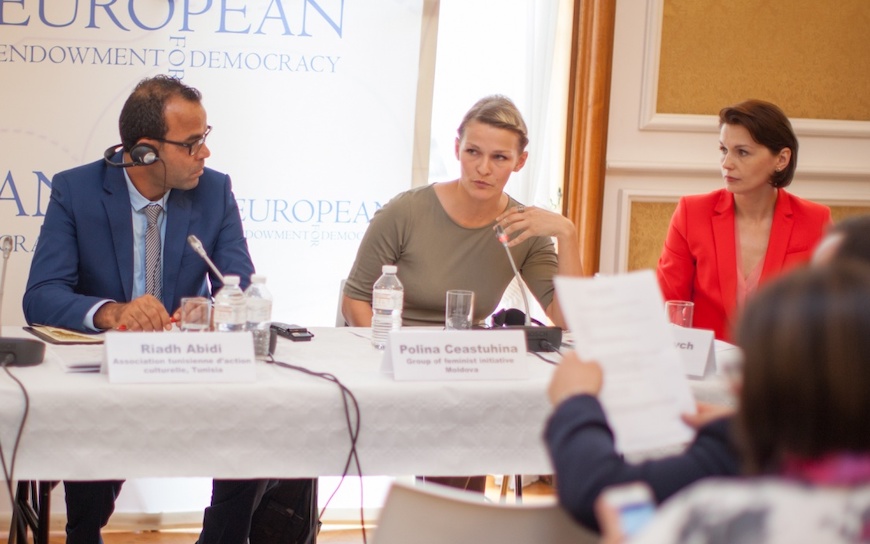 Polina Ceastuhina speaking at the event


Some of these partners were part of a discussion panel entitled Common values to common actions: the future of EU support for democracy in the EU Neighbourhood, moderated by Orysia Lutsevych, research fellow at Chatham House. Other speakers included Joanna Wronecka, Deputy Minister of Foreign Affairs of Poland and Maciej Popowski, Deputy Director-general at the European Commission’s Directorate General for Neighbourhood and Enlargement Negotiations.

In her speech, Ms Wronecka congratulated EED on its three years of excellent work and stated that EED has “proved more successful than we expected”. 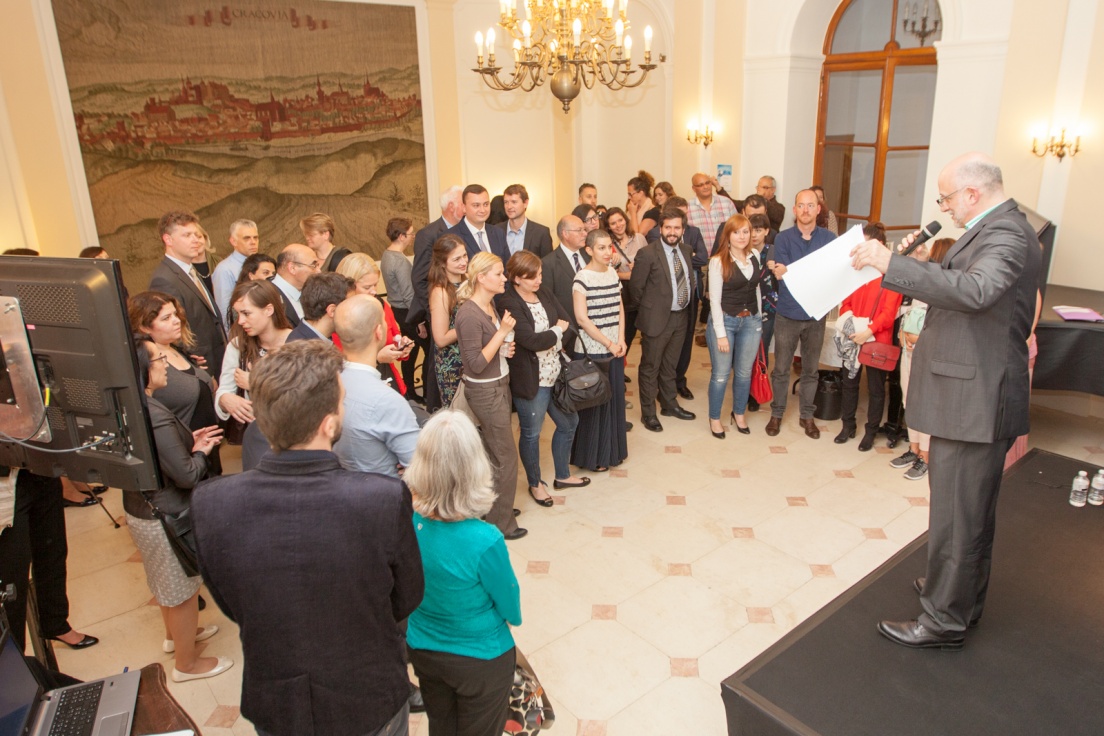 Riadh Abidi from Association Tunisienne d'Action Culturelle provided insight into the current political situation in Tunisia, which was still very difficult and fragile. He explained that the government did not give priority to democracy, nor to tackling social problems. However, corruption has sharply increased in the aftermath of the Arab Spring. One of the important tasks for his association is therefore to mobilise local communities to fight corruption.

Polina Ceastuhina representing the Group of Feminist Initiative from Moldova reported that “democracy” and “European integration” have dramatically lost symbolic value in society due to being associated to corrupt parties in her country, eroding citizens’ trust towards the EU, the genuine pro-democracy actors and the values they stand for. In this context developing critical thinking, increased media literacy, explaining and promoting democracy and pluralism are continuously important.

“Democracy is not just something written on a piece of paper – it is a living organism”, argued Mr Dayoub in a passionate speech imploring the EU to not leave Syria alone in its struggle for a free and democratic country: "People in the Arab world believe in these values, they are dying for them". He also highlighted that the resilience of the Syrian people was enormous and that it was civil cooperation that has helped Syrian society to survive until now.

Arif Yunus, founder of the Institute of Peace and Democracy in Azerbaijan and a former political prisoner himself, drew attention to the remaining 148 political prisoners in Azerbaijan. Talking about the current situation in his home country he explained: “For people in the post-Soviet countries the West is like a dream. Once they realise the West is imperfect, they start detesting it.” According to him, this is what the Russian propaganda would like to achieve. But this is exactly why the West should uphold its values and continue to inspire other countries. He is of the opinion that the Arab Spring will eventually reach Azerbaijan and Central Asia. Arif Yunus also thanked EED for its support and flexibility. 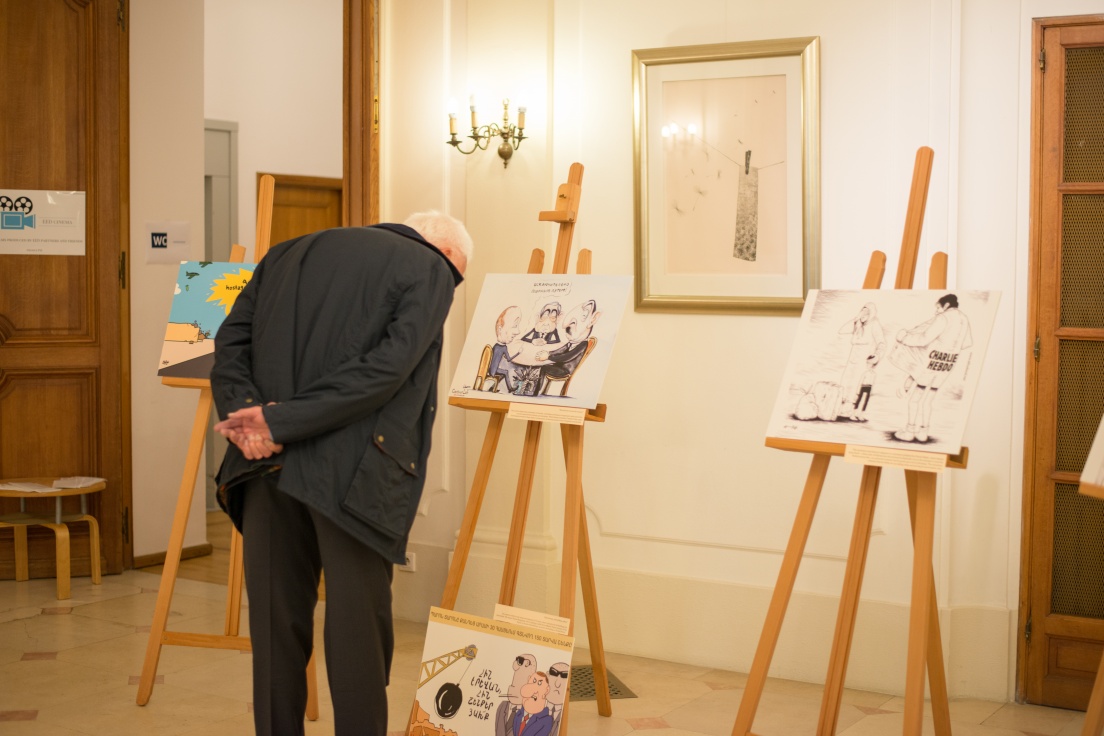 As part of its anniversary celebrations EED also hosted a cartoon exhibition created by EED media partners in Armenia, Azerbaijan and Jordan and screened several short films produced by EED partners from the Southern Neighbourhood.

Sharing the values of freedom, democracy and dignity

After the debate, EED Executive Director Jerzy Pomianowski invited partners and friends of the Brussels democracy community to celebrate the successful work by EED and its partners. He expressed satisfaction about the positive reception EED has received from the European Parliament and other EU institutions.

“For us at EED the indicator of our success reflects in our partners: they are courageous people that are tirelessly working in difficult conditions, that devote their time, freedom and sometimes even their own lives to pursue those values that we believe in – the values of freedom, democracy and dignity.”