Equal Rights Instead of Flowers

On 7 March, ahead of International Women’s day the Group of Feminist Initiatives from Moldova organised its first public lecture “Identity, body, activism”. 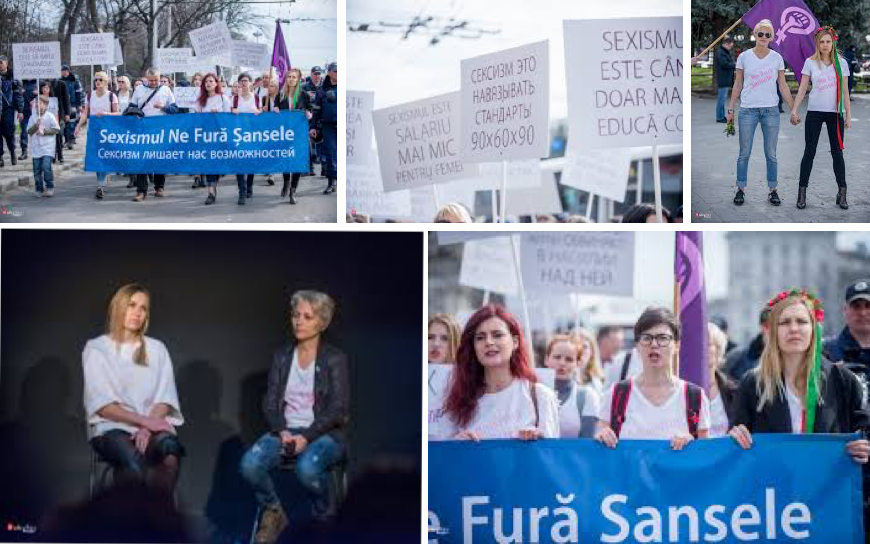 Identity and the women's body are means to manifest activism and to fight against discrimination and inequality. This was discussed in the first public lecture organised by the Group of Feminist Initiatives. Supported by EED, this is a first lecture in the series of six awareness raising events, which explain feminism, gender identity and equal rights.

Angela Frolov, a LGBT activist from Moldova shared her story about how she started to fight against homophobia and discrimination in Moldova. A lesbian, who was exposed to discrimination, she is currently actively fighting to protect the rights of LGBT communities. “I know there is a negative rhetoric around LGBT, but if we detach ourselves from labels and stereotypes, we can see that actually there is no problem in someone being homosexual. I became an activist in order to promote equality and fight against hate speech”.

“We went out dressed as sex workers to fight against the existing stereotypes and people coming to Ukraine as sex tourists”, mentioned Yana Zhdanova an activist from the Ukrainian group FEMEN. She shared how FEMEN used their bodies as a way to protest. FEMEN appeared as an initiative to fight sex industry and sex tourism in Ukraine and other post-soviet countries.

“Sexism is stealing our chances” was the slogan of a rally held on 8 March by the EED supported Group of Feminist Initiatives in favour of gender equality and equal rights for women.

Equal rights instead of flowers – the march raises awareness about unequal treatment and discrimination towards women, as well as fight the historical preconceptions which still exist in some countries, where women are seen as complementary to men, rather than equal players in the society.

According to the activists, sexism refers to stereotypes, prejudices and gender based discrimination. They view it as sexist when women and men are treated based on gender stereotypes and raise concerns that in a patriarchic society, such as Moldova, women are affected by sexism and humiliated by sexist declarations.

“We think that public space should be safe and comfortable for all. Discussions and political debates have to take place without sexist declarations, and those who make them should be made accountable” – said the organisers of the march.

"Sexism is stealing our chances"

The Group of Feminist Initiatives, an EED supported initiative,is fighting sexism through awareness campaigns, including on-line content as well as public events. From March to August, six public lectures on gender equality with well-known feminist and gender activists, politicians and prominent women as speakers will explain feminism to a broader audience and break stereotypes about the feminist movement.