What next for Belarus? EED hosts a debate with Anna Kanapatskaya

On 4 December, EED hosted the event ‘’What Next for Belarus?’’, co-organised in cooperation with Chatham House. Anna Kanopatskaya, member of the opposition United Civil Party (UCP) at the Belarusian National Assembly, was the guest speaker of the event. 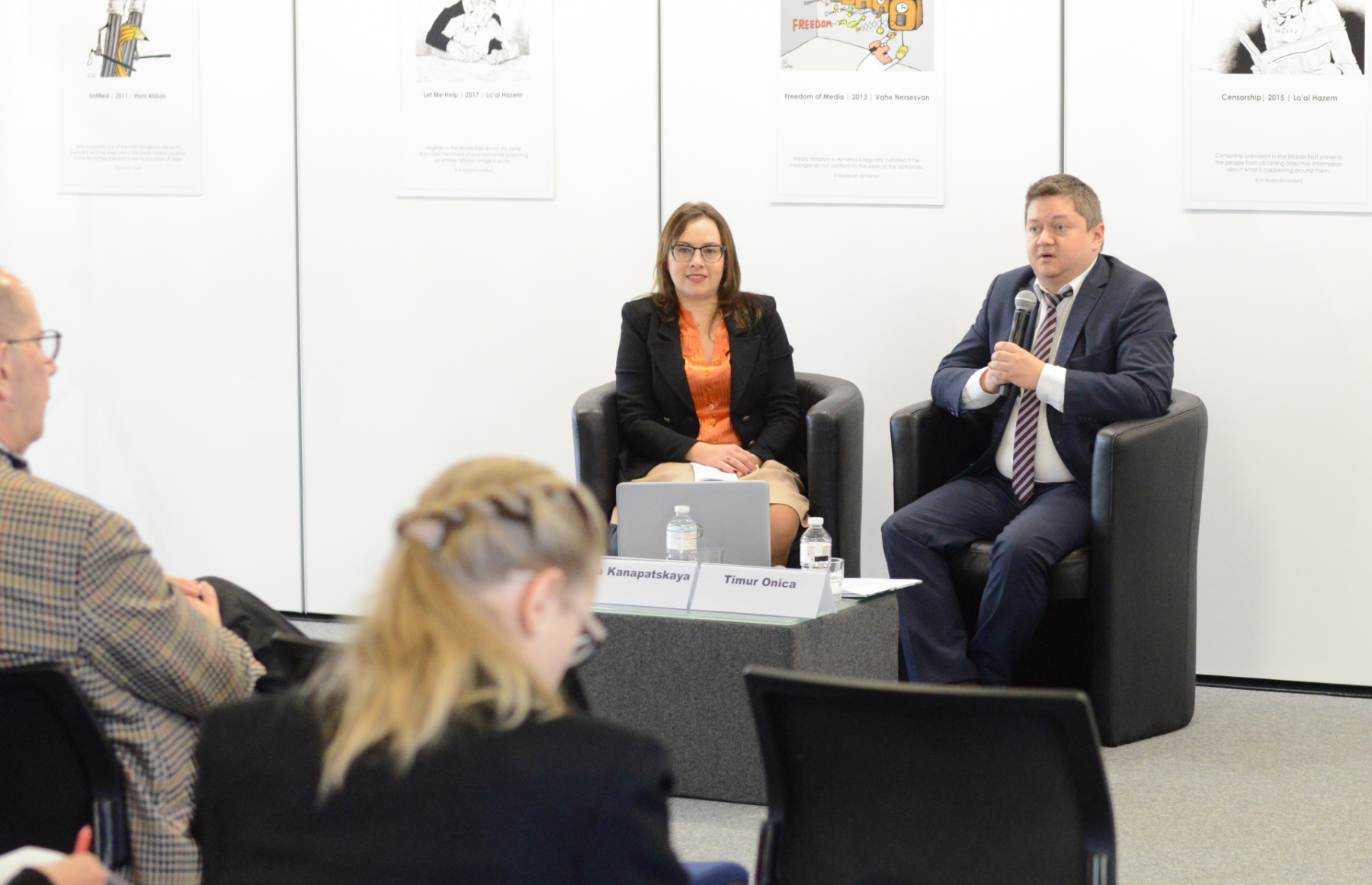 The event sought to facilitate discussion on Belarus in light of its progressing relations with Europe. Pushed by economic and geopolitical vulnerabilities due to stalled reforms and the Russian actions on Ukraine, Belarus has puzzled outsiders with recent tentative steps towards liberalisation. Opposition, civil society and the media have been allowed to operate with some ease in contrast to the previous two decades, when the country has been labelled as “the last dictatorship in Europe”. However, lagging progress in key aspects of democratisation, as well as the arrests of hundreds of demonstrators during protests in March 2017 against a tax on the unemployed,suggest that the small achievements are vulnerable to rollbacks.

Taking a closer look at the changes is important for designing a strategic approach towards the country. Are we witnessing a genuine opening? Or is this rather another attempt by President Lukashenka to extract what he can from the EU, in exchange for minimal and easily reversible concessions?

Anna Kanopatskaya MP has been a member of the Belarusian Parliament in September 2016 – one of two opposition representatives sitting in Parliament for the first time in twenty years. Speaking about her experience during her first year, addressed these questions and shared her perspective on the current political situation in the country.

Belarus finds itself in the midst of a deep economic crisis and needs both EU financial support and comprehensive reforms. According to Kanopatskaya, one of the top priorities is reforming the electoral code, a necessary step to bring about a change into the legislative system. Economic liberalisation also seems like an achievable goal, as Belarusian officials have recently developed a new decree on freeing up entrepreneurship.

“Today, through its parliamentary mandate, the opposition is acting as a bridge between society and the authorities. We are organising roundtables, conferences in which citizen activists, NGOs and high-ranking government representatives are participating. This seemed unbelievable just one year ago,” Kanopatskaya said.

Regarding Belarus’ relations with the EU, Kanopatskaya stated that the opposition is ready to work towards reforms, which will require compromise and dialogue. However, she also stressed that other serious issues such as death penalty and political prisoners in Belarus must be condemned and cannot be negotiable.

During discussions, Kanopatskaya touched upon her work and cooperation with other Belarusian MPs. She affirmed that, despite some initial disagreements, relations are currently improving. However, she complained that support from other MPs is limited to economic reforms and often expressed informally; when she advocated for a reform of the tax legislation, other MPs did not dare to support Kanopatskaya openly in front of the Ministry of Finance. She was able to work with some reform-minded MPs on new draft laws, even though pro-government parliamentarians are reluctant to publicise the involvement of an opposition member in the law-making process. “You could not find my name on many bills I worked on,” said Kanopatskaya.

Moreover, Kanopatskaya explained that cooperation with the only other member of the opposition, Alena Anisim (representative of the Belarusian Language Association), is limited to cultural and language policies, and does not extend to political or economic issues.

The Q&A session also touched upon the next Belarusian local elections, scheduled for February 2018. Kanopatskaya predicted “the usual scenario”. Nevertheless, she underlined that the opposition is preparing for the next local elections because the electoral campaign is the only opportunity for opposition representatives to interact with the citizens without risking imprisonment. Even though the goal is not to win, the campaign for local elections is crucial for gaining society’s support and for making opposition faces known to the public.

Concerning her work as an MP, Kanopatskaya also mentioned that she is fostering an initiative called “Popular Law” (Narodny Zakon), whose aim is to collect suggestions from citizens in order to include them in the law-making and legislative processes.

One last topic of discussion was the future of Belarus-EU relations. Kanopatskaya explained that a part of society in Belarus is influenced by Russian propaganda, and blames EU sanctions on Russia for the worsening economic situation in the country. In this respect, the MP invited the EU to foster the dialogue with Belarus, as this country can play the role of a “buffering border” between Russia and the EU.

When it comes to the Eastern Partnership, Kanopatskaya complained about the lack of a horizontal dimension, which would allow Belarus to enter a dialogue with other EaP countries, looking at their experience and mistakes, in order to work better with Brussels. Nevertheless, dialogue with the EU “is impossible to stop”.

She underlined the need to address the many internal problems blighting the country’s development:

“The country does not respect the EU and OSCE values and standards, yet our society is ready for change. Dialogue between Belarus and the EU must be followed by a clear mechanism of implementation,” she stated.

Kanopatskaya also called upon the EU to be more vocal in their demands towards the Belarusian government:

“Only if the EU is more vocal in demanding deep economic and social reforms, Belarusian citizens will understand the close link between the improvement of their living standards and the adherence to EU values,” said the MP.

“The importance of keeping up a multi-track dialogue with Belarus, with active inclusion of the Belarusian civil society and opposition, at least until the government has proven it is a truly representative interlocutor on behalf of the Belarusian people. EED will continue to provide a platform for this dialogue”.