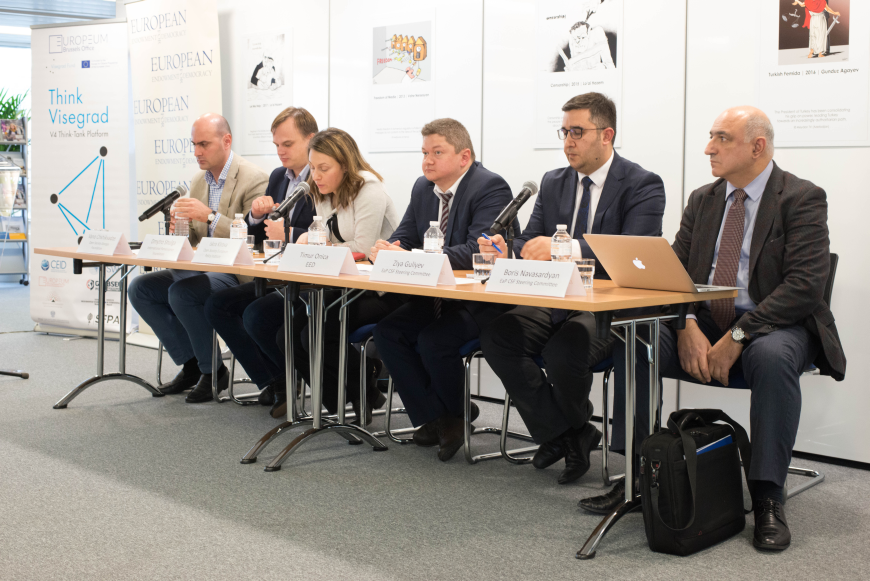 EED Executive Director Jerzy Pomianowski opened the event, underling that in terms of achievements, “the biggest paradigm shift has been in the increased recognition of the role of civil society”. Keynote speaker Linas Linkevičius, Minister of Foreign Affairs of Lithuania, emphasised the need for the EU to be more proactive in defending the common values shared by both sides and step up its engagement in the region.

“Today’s situation is more than a “geopolitical game”; it is a battle for the hearts and minds of citizens”, said Linkevičius.

Panel 1 | Assessing policy performance: the Eastern Partnership on the eve of the Brussels summit

During the first panel, moderated by Iskra Kirova, Senior Policy Analyst at Open Society European Policy Institute, six experts working on or in the EaP countries had the opportunity to take stock of the current situation and set out their expectations vis-à-vis the EU.

Human rights and democracy cannot be discussed only at the Summits - they have to be a priority in the overall approach”, Guliyev said.

As regards expectations towards the EU, the experts agreed that the EU should differenciate its strategy and EaP deliverables according to each country. In certain areas, a multilateral dimension could be applied, for example in strategic communication. Therefore, they expressed the wish for a "deep and comprehensive change’’ of the EaP policy.

The speakers also expressed disappointment that in the European Commission’s White Paper on the future of Europe the EaP countries are not even mentioned, despite the fact that a European perspective is crucial for them. As Vano Chikhikvadze stated, “no matter how much we discuss at Summits, only the perspective of EU accession can bring real change in EaP countries’’.

Panel 2 | Eastern Partnership Quo Vadis? Expectations and recommendations for the next steps

Experts of the second panel, which was moderated by Adam Balcer from Think Visegrad platform, examined the EU’s response to the emerging trends in the region.

"A more urgent question than economic liberalisation is filling gaps in the social situation in EaP countries, through the fight against corruption and the unfair distribution of wealth”, said Rebecca Harms.

In her concluding remarks, Miriam Lexmann, EU Regional Programme Director at International Republican Institute, argued that politicians need to engage more with citizens and stop talking down to them. Genuine support to civil society, democratic political parties and disadvantaged citizens should be at the core of the Eastern Partnership.

See the full photo gallery of the event on Flickr.