Corruption is a serious crime that can undermine social and economic development in all societies. The United Nations General Assembly designated 9 December as International Anticorruption Day to raise awareness on corruption and on ways to combat and prevent it. 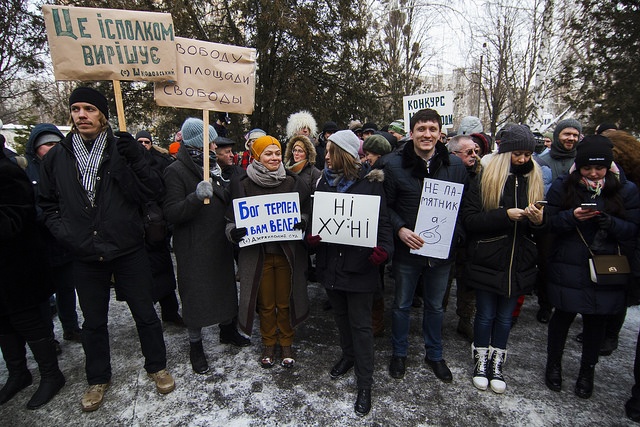 2017 global campaign focuses on how corruption affects education, health, justice, democracy, prosperity and development. According to UN estimates, every year $1 trillion is paid in bribes while an estimated $2.6 trillion are stolen annually through corruption – a sum equivalent to more than 5 per cent of the global GDP.

To mark International Anticorruption Day, the European Endowment for Democracy (EED) is pleased to publish an article on our grantees from Kharkiv Anticorruption Centre (KhAC), Eastern Ukraine. Since 2016, KAC is exposing corruption and the notorious abuse of public finances in local administrative bodies in Kharkiv.

When back in 2015 a group of Kharkiv EuroMaidan activists decided to set up an NGO to fight corruption and help their city move forward with reforms, they knew it would be extremely challenging. But two years on, KhAC its mark and produced significant results.

KhAC started as a grassroots initiative of young people, coming from different backgrounds but sharing the same values and striving to bring about change. During the local elections of autumn 2015, some of the activists ran for seats in local councils. Two were successfully elected, which inspired them even more.

This was a difficult period for Ukraine. After the dramatic events of EuroMaidan and Russia’s annexation of Crimea, the financially drained country was desperately trying to defend its territories in the eastern regions. Support for the new initiative was not forthcoming, but the activists were determined to keep going whatever the difficulties.

Corruption was and still is no lesser evil for Ukraine’s existence than the war, so the young activists launched their crusade against corruption sacrificing their time, money and professional careers. As they found later on, this also entailed putting their lives at risk.

Head of the KhAC, Dmytro Bulakh, says that support from the EED came at a timely juncture, helping the NGO to establish solid footing and grow into a very influential force very fast.

“We would have launched this initiative even without outside assistance, but it would have taken us much more time and effort, and the impact would have been much less. EED’s support gave a great boost to our development.”

Since then the KhAC activists have been exposing corrupt practices and abuses in public finances and local administrative bodies by conducting investigative journalism, monitoring public procurement deals and decisions of local councils and governments. They have been making their findings public on social media, producing bi-weekly reports, and giving multiple interviews on local TV.

The facts published by KhAC reveal how corrupt practices work and who stands behind them. They show how much money is stolen from the public purse when the city pays for ridiculously overpriced services and equipment to dummy companies or companies associated with city top managers, and what outrageously luxurious real estates and movable properties are owned by some “modest” civil servants.

KhAC’s activities quickly started generating much interest from the public, local authorities and law enforcement bodies, and bringing results, such as the dismissal of the corrupt head of the Kharkiv Cancer Centre or revocation of the unlawful architectural contest, achieved by winning in court or through organisation of public protests.

The most significant achievement of the KhAC so far is clamping down on the land frauds known as “cooperative schemes”. According to KhAC findings, since 2008, Kharkiv City Council has given away over 1,000 hectares of land for free to several newly created housing co-operatives “in order to improve the housing conditions of its members”. In reality, the land plots were given to major commercial developers and businesses. The revelations led to a criminal investigation launched by the Prosecutor General’s Office in 2015, in result of which top managers of the City Council and the former Kharkiv Mayor were served with charges. After that, some “co-operatives” (de facto developers) have voluntarily returned a total of 158 hectares of unlawfully acquired land.

As Ihor Chernyak, a KhAC activist, explains: “The estimated cost of the land plots returned to the city’s ownership is approximately one billion hryvnyas [approx. 31.5million Euros].”

Dmytro Bulakh adds, “‘I believe that this return [of land]… is our joint victory as a civil society. … This is the first serious systemic precedence when the land which was in fact stolen from the city, the land which was just given away for free to development companies and to persons close to the city government, is returned to the city’s ownership. ... The city must be paid real money for alienation of the land which is in its ownership, so that this money could be invested into development of the city’s infrastructure, maintenance, etc.’

Evidently though, the tangible results in fighting corruption produced by the KhAC activists are not to everybody’s liking. At first, the activists were approached with offers to make a deal and advice to refrain from digging too deep. This did not work.

On 30 August 2017, Dmytro Bulakh was attacked on his way to the office and severely beaten by unknown men. As a deputy of the Kharkiv Regional Council, he was supposed to speak the following day at a session of the Council and make some very important statements. Instead, he found himself badly injured in a hospital.

On 18 September 2017 another KhAC activist Evhen Lisichkin was attacked by unknown men near his house and also sustained physical injuries. The attackers strongly advised him to slow down and stop his investigative and civic activities. KhAC and other civic activists are certain that both attacks were brutal attempt to intimidate anticorruption activists. The police investigations have produced no results, so far.

However, the intimidation has only served to strengthen their resolve. The KhAC activists are even more determined to pursue their plans. Investigations are underway into blatant and obscene abuses of public funds allocated for restoration works after a series of explosions at a massive arms depot in town of Balakleya in Kharkiv Region, shady deals of the Kharkiv Metro and outrageous rates of the city’s monopoly supplier of water supply and sewage services.

The KhAC is now well-known across Ukraine and has become an influential civil society actor. The NGO’s achievements have made it possible to enlist support from other international donors and organisations including the European Commission, IRF, IWPR, Matra and USAID ENGAGE programme.

Today, KhAC activists are expanding their activities towards coordinating a broader Kharkiv Reform Coalition, which unites several dozen NGOs with plans to embark on an ambitious and collaborative project of preparing a comprehensive strategy for Kharkiv region.