As Human Rights Day is commemorated around the world, we look at EED’s contribution to defending and promoting human rights in the European Neighbourhood and beyond, and present some success stories of our partners, working every day to put an end to discrimination and exclusion. 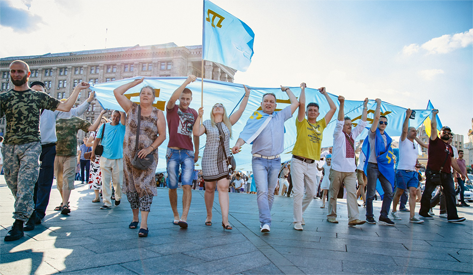 Respect for international human rights, adherence of democratic values and observance of principles of non-violence are core to EED support to pro-democracy actors in the European Neighbourhood.

Since its establishment, EED has allocated over 3 million euros to initiatives specifically targeting human rights activism and monitoring.

Two of these are Leyla and Arif Yunus, two of Azerbaijan’s most prominent human rights activists. After having spent several months in prison on trumped-up charges of fraud, tax evasion, and illegal business activities, they have resumed their advocacy work. Financed through an EED grant, their new top project is now a book that will look back at their 30-year crusade to document human rights abuses in Azerbaijan.

“We were beaten and tortured, they stole our health,” says Leyla Yunus. “They freed us only because we were dying and they got afraid. What we saw, what we went through, must be told.”

In an equally challenging albeit very different context, EED funds Camp Cast, a project aimed at combating exclusion of Palestinian refugees in Lebanon by broadcasting live television shows made by refugees for refugees.

“We encourage young people to be more active,” says Ammar Youzbachi, who acts as the initiative’s spokesman. “Our goal is to help them build their future and play a more active role in society.”

According to the latest Amnesty International Report, providing overview and a summary of over 159 countries and territories, 2016 saw “a global pushback against human rights”.

However, in the last year “the very best of human conduct shone through. Countless individuals stood up in defence of human rights and victims of oppression, often putting their own lives or freedom in jeopardy to do so”.

In Armenia, one of the least LGBT-friendly countries in Europe according to advocacy group ILGA-Europe, EED has supported Right Side NGO, the only organisation in the region focusing on transgender issues. The group combats discrimination and campaigns for equal rights for people regardless of sexual orientation or gender identity.

Other initiatives funded by EED specifically target vulnerable social groups and aim at providing an avenue for them to voice their grievances and advocate for their rights.

In Moldova, support to ‘Oameni și Kilometri’ (‘People and Kilometres’) has enabled the outlet to get off the ground and expand its team of journalists who go to great lengths to tell the real life stories of prejudices faced by some of the country’s most vulnerable citizens.

Universal human rights begins ''in small places, close to home'' – as Eleanor Roosevelt said. These initiatives show how every voice can make a difference if people take the pledge to #StandUp4HumanRights.