“Dialogue in democracy, democracy in dialogue”

The sixth edition of the Warsaw Dialogue for Democracy took place on 7-8 December 2017 in the Polish capital. The theme of this year's event was “Dialogue in democracy, democracy in dialogue”, with EED organising a panel on independent media. 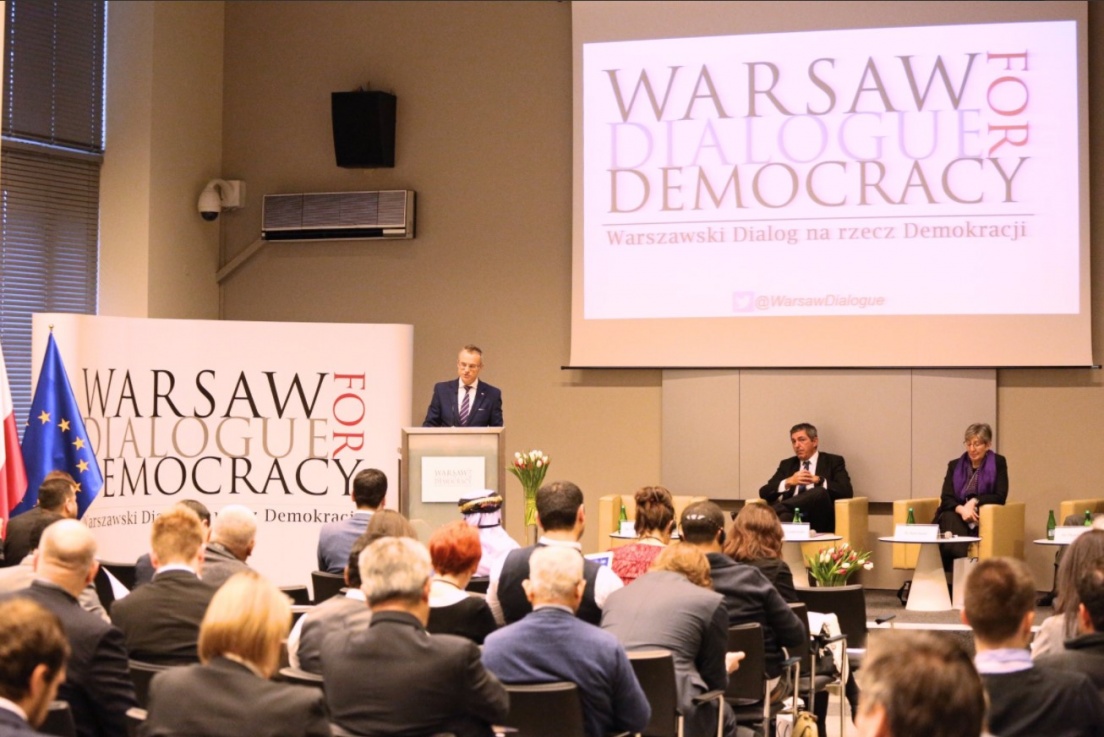 Opening session of the Warsaw Dialogue for Democracy. © Poland MFA

The Warsaw Dialogue for Democracy (WDD) has been organised by the Polish Ministry of Foreign Affairs in cooperation with the European Endowment for Democracy (EED) and other partners since 2012.

The event brought together around 100 civil society representatives, human rights defenders, academics, international organisations and politicians from across the globe to discuss the challenges facing democracy across the world today, and look for opportunities to support the processes of democratic transition.

This year's conference focused on the role of dialogue as a foundation for respecting for human rights and freedoms and the strengthening of democratic institutions.

Participants were welcomed by Mr. Jerzy Baurski, Director of the Department of the United Nations and Human Rights, MAF of Poland, and Mr. Wojciech Federczyk, Director of the Lech Kaczyński National School of Public Administration.

In his opening remarks, Mr. Baurski highlighted the tumultuous global backdrop affecting the democratic landscape and putting democracy under pressure: “Now it is time for those who believe in democracy to be proactive. We can no longer take democracy for granted,” he said.

Speakers also drew attention to next year, which will mark the 70th anniversary of the Universal Declaration of Human Rights. This declaration continues to serve governments, international organisations, civil society and individuals as a “moral compass” for setting conditions for equality.

In a growing convergence where soft power issues - democracy, human rights and free media - have become part of the hard power agenda, the speakers called for policies to be pragmatic but still rooted in democratic principles and values.

Lambrinidis also stressed that civil society engagement is a condition for fostering democracy around the world – for monitoring and curbing the abuse of power, holding regimes accountable for crimes against human rights and upholding principles enshrined in the universal declaration.

“The litmus test is not perfection. The test whether you have the proper institutions, a thriving civil society, and checks and balances in place to ensure that human rights are not pushed under the carpet.”

Following the opening, a number of panel sessions took place looking at issues such as free media, interfaith dialogue and transitional justice, as well as the role of youth in shaping an inclusive political system.

Tackling the challenges for independent media

This panel session organised by EED focused on challenges and opportunities for independent media outlets in different parts of the world. Participants discussed ways to ensure plurality of the media landscape and freedom of speech, as well as how to capitalise institutional and external support without compromising the credibility of content.

A central topic was the media struggle for survival in the EU neighbourhood.

“Free media as we know is a pillar of democracy. But media outlets and journalists are under more pressure than at any other time. We need to look at achieving sustainability in view of the many obstacles and huge challenges facing the media today”, said Moukalled.

The topical issues of fake news and disinformation campaigns were also addressed. The menace of fake news is clear: fiction, fabricated as fact, can do real harm to the democratic process. Panellists underlined the importance of media organisations and their role as transmitters of reliable, balanced and credible information.

“As journalists we should not fight against fake news, but continue to do our job, tell the story and cover the issues as we have always done. We have almost forgotten the basics of our trade. This fake news crisis should be covered like any other crisis”, said Antelava.

Finally, the panel pointed to the continued need and importance of support from donors like EED, for strengthening media capacity in the region. Only truly independent, free and professional media can defend the cause of media freedom.

During the closing session, EED Executive Director Jerzy Pomianowski recalled some of the key messages from the event, adding that in his view, the value of solidarity should underpin all of our actions: “We need to add one more human right to the list: the right to receive solidarity and the right to extend solidarity to all”, said Pomianowski.

For further information, see the official website of the event.