On 21 February, 2018, the European Endowment for Democracy (EED) hosted the panel Tackling Foreign Economic Footprint in the Western Balkans in cooperation with the Center for International Private Enterprise. 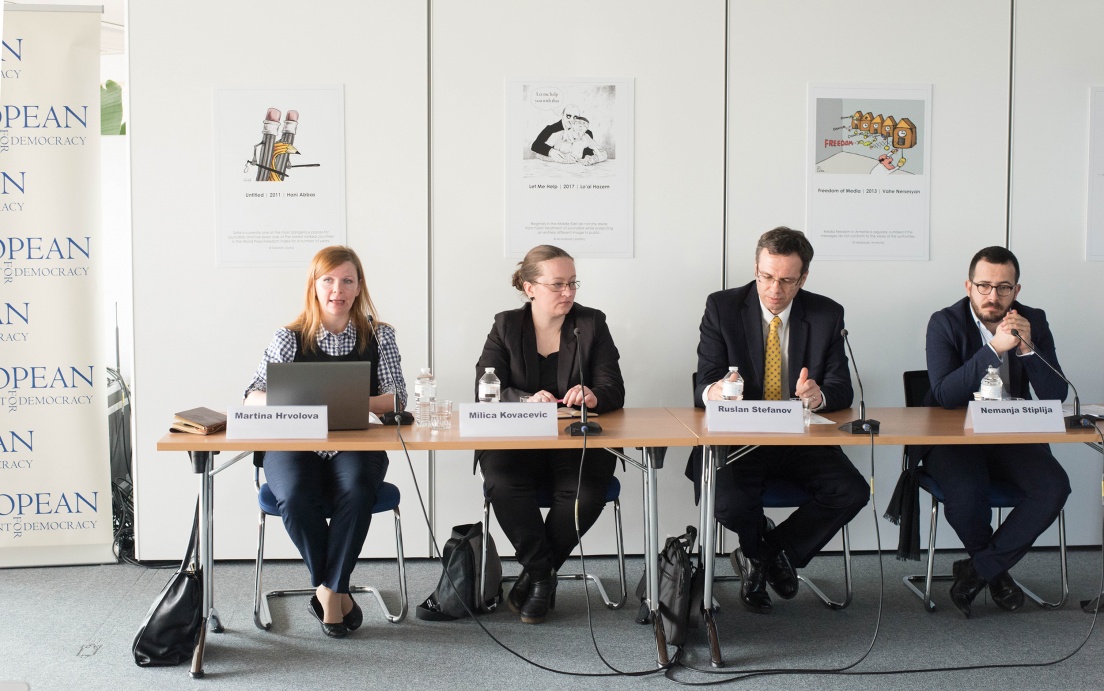 The panel provided an opportunity to discuss CIPE’s project pioneering a new methodology to quantify foreign economic footprint in the Western Balkans, with a focus on corrosive capital, analyzing how it interacts with local governance structures. The content of a series of assessments on how governance gaps create opportunities for the inflow of corrosive capital, and how this capital exacerbates those governance gaps in four Western Balkan countries, was also discussed. The assessments were written by CIPE partners, including the Sofia-based think tank Center for the Study of Democracy and a network of local experts in Montenegro, Serbia, Macedonia and Bosnia and Herzegovina.

EED Executive Director Jerzy Pomianowski opened the event, noting the timeliness of the creation of a methodology to measure foreign economic footprint in the Western Balkans at a time when Europe was beginning to feel the effects of efforts by external actors to undermine democracy.

During the panel, moderated by Martina Hrvolova, Program Officer for Europe at the Center for International Private Enterprise, a representative of CIPE grantee Center for the Study of Democracy and two local experts from Montenegro and Serbia who worked in cooperation with the grantee to create the assessments on foreign economic footprint in their countries, discussed the methodology and their findings.

Martina Hrvolova, Program Officer at Center for International Private Enterprise, defined corrosive capital as equity, debt, or aid that takes advantage of, or exacerbates, governance gaps such as loopholes in anti-corruption policies, to the detriment of citizens and the local private sector. She also noted that such investment by non-democratic actors has led to a perception in the region that economic reforms did not deliver the prosperity that they promised.

Ruslan Stefanov, Director of Bulgarian Center for the Study of Democracy, explained the process behind developing the methodology to measure foreign economic footprint in the Western Balkans and noted the difficulty local experts had in accessing the necessary information. Stefanov also stressed that the focus should not be on just the investment or footprint alone, but on the governance gaps in the Balkans that allow for the proliferation of corrosive capital.

“The nature of corrosive capital is the lack of a clear-cut border between politics and economics,” Stefanov said.

Milica Kovacevic, President of Montenegrin Center for Democratic Transition, noted that, despite a recent decline in Russian investment in Montenegro, it remains the largest investor in the country, investing $1.3 billion or 1/3 of the country’s GDP, most of which went to the tourism and real estate sectors. Despite NATO accession, Montenegro remains vulnerable as now the European Union integration efforts are targeted by Russia.

Nemanja Stiplija, Founder of European Western Balkans, brought attention to investment in the media sector in Serbia, stating that, since 2012, there are more than 20 news outlets, especially online portals, which provide only a Russian perspective, many of which have not legally registered. It is also hard to tell how the outlets are financed or where the headquarters for the entities that back them are located. Many rebroadcast Sputnik content given to them for free, which is especially tempting because of the cost of creating news content.

The panelists called on the European Union to take a strong stance on governance gaps in the Western Balkans, while providing support to local civil society in closing those gaps, collaborating with the local administrations. They noted that this strategy would help to promote local ownership in promoting good governance and rule of law in the region.