On 5 March 2018, the European Endowment for Democracy hosted the presentation of the Creative Content Support Fund, which provides grants for independent Russian-language media outlets in the Eastern Partnership (EaP) and beyond. 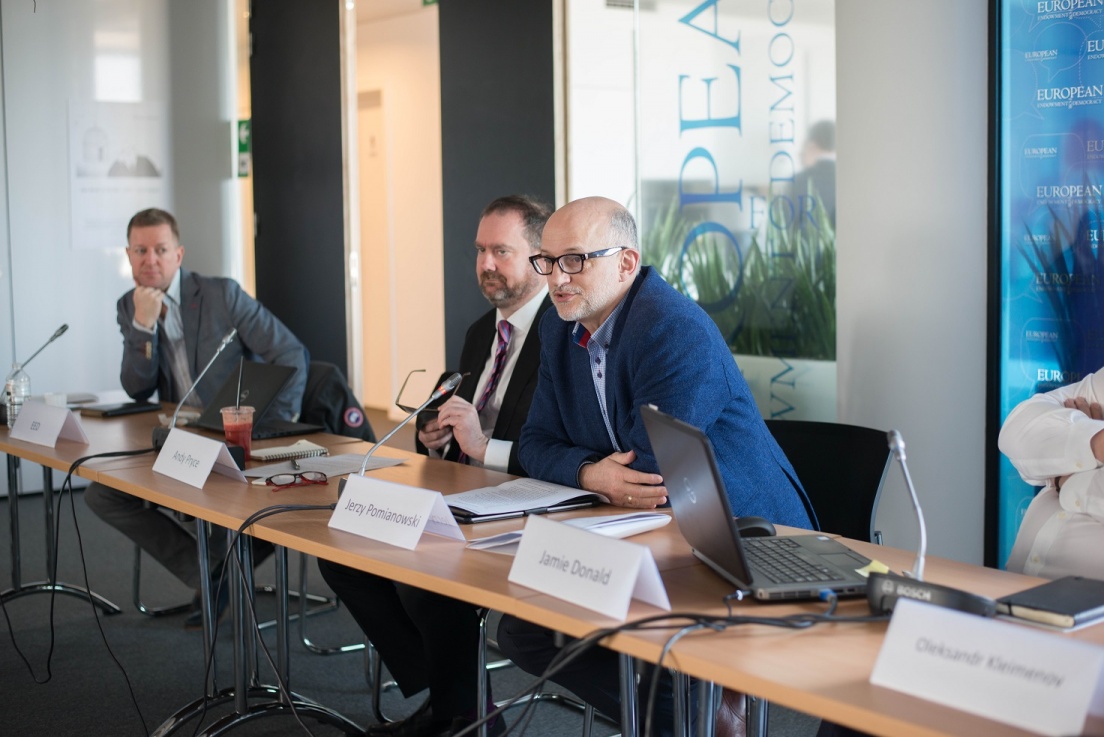 The Content Fund is a unique mechanism for granting support to independent broadcasters and digital platforms for the production and acquisition of distinctive, entertaining, and informative Russian-language non-news TV and video content. This is primarily targeted at Russian-speaking audiences in the EaP region and beyond, and includes documentaries, talk shows, and drama, packaged in a variety of formats. The overarching aim is to bring plurality and balance to the Russian language independent media landscape.

"In the Eastern Partnership countries, there is a significant share of the Russian speaking media audience. It has long been under-served and now requires special investment,” said EED Executive Director, Jerzy Pomianowski, in his opening remarks.

The meeting was attended by representatives from EU member states, the Canadian and US governments, EU institutions, international broadcasters, as well as independent media specialists.

Pomianowski also explained how the Fund came to fruition, recognising the dedication and efforts made by both EED staff and a number of donors to arrive at this point.

“It has been a long journey to get to this stage and we are proud to present the Fund. It all started with the 2015 groundbreaking EED report, which identified a key gap in the Russian language media landscape and which the Content Fund now aims to fill,” said Pomianowski.

“But there are many challenges ahead; donors need to stay the course, keep up the pace and work even harder to counter balance ever-increasing propaganda and disinformation,” he cautioned.

Since the publication of the report, “Bringing Plurality and Balance to the Russian Language Media Space”, EED has acted as the co-ordinating body in implementing its key recommendations. Alongside the creation of a news hub, Russian Language News Exchange (RLNE), jointly with other donors, EED has also supported the development of the Riga-based Baltic Centre for Media Excellence (BCME), and now the establishment of the Content Fund.

Speaking at the event, Andy Pryce of the UK's Foreign Office (FCO), a key donor to the Content Fund, underlined the responsibility of the EU to support a new generation of media that ‘tell the story’ of 21st century Eastern Europe. He also noted the overriding importance of excellent quality content:

From late 2016, EED has been hosting the inception phase of the Content Fund. Three calls for proposals have already been launched under the Fund. As a result, around 20 grants and 40 hours of high-quality, non-news, original content have been provided to the network of the Fund’s partners.

One of those beneficiaries is Coda Story, a single-issue web platform that puts a team of journalists on one crisis at a time and stays with it, providing unique depth, continuity and understanding to events that shape the world. EED’s support is helping to develop a Russian-language Coda Story website, Coda Russian, and social media output, in addition to the existing Coda English.

“The region desperately needs quality storytelling, real stories about real people. This grant from the Content Fund has helped us be creative, and given us space to be highly experimental and reach wider audiences through novel formats,” said CODA CEO, Natalia Antelava.

One of the highlights of the event was the presentation of the Fund’s trailer and website. The trailer pulls together some samples of the content produced by grantees, including “Living in the Now”, a series of short features from the​ Donetsk Institute for Information in Ukraine about people affected by the war fought in the east of the country. How do these people overcome problems they never thought they would ever have to deal with? While some are desperate, others are ready to start a new life from scratch. View here

Other grantees present at the event spoke about their determination to deliver the best quality content to their audiences and emphasised the need for quality storytelling. They also underlined the crucial role of the Content Fund

“It has not just been about the funding but also the mentoring for the production. We would not have been able to produce this on our own. The Content Fund is really providing a much need service and filling a gap,” said Dima Khilchenko of UA: Pershyi.

Find out more about the Content Fund, examples of work and how to apply on the website