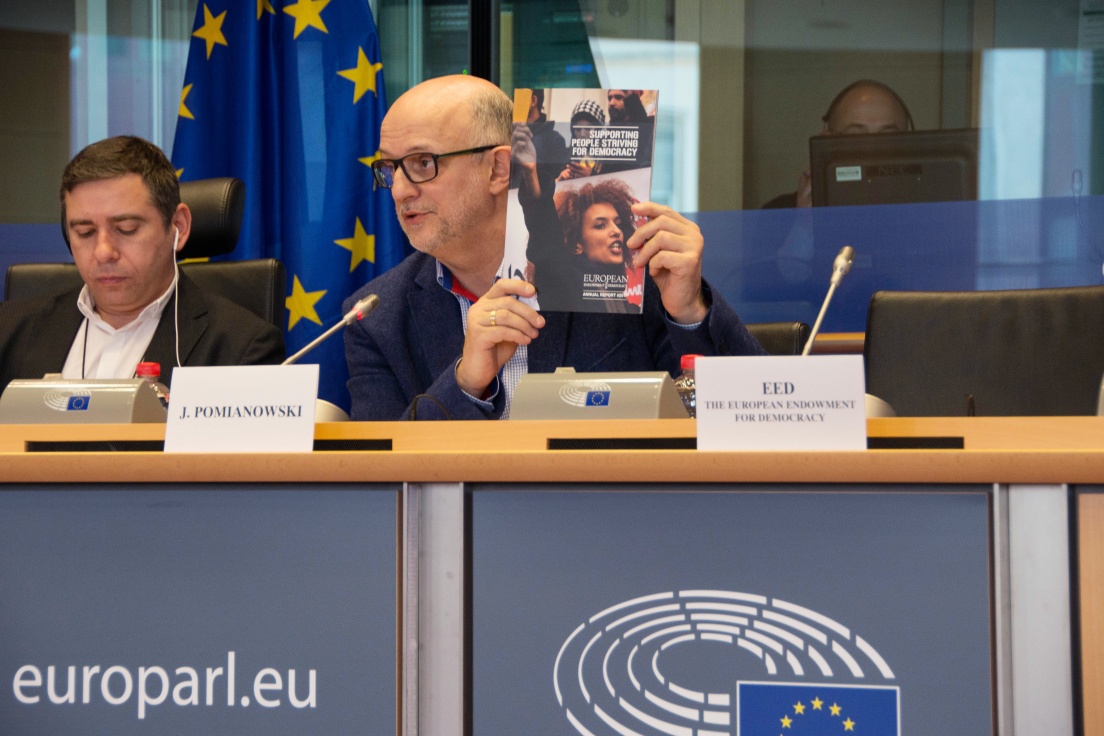 Addressing MEPs, Pomianowski said: “The past year was another turbulent one for democracy activists and human rights defenders. Threats to democracy continue in the European neighbourhood where most of the Endowment’s support is focused.

“While this has brought many challenges, it also demonstrates the growing relevance of EED support and our values-based approach to international cooperation.”

Pomianowski explained that 2017 marked the fourth full calendar year of EED operations. During this period, the Endowment further consolidated its position as a credible and important democracy support institution, supporting more than 160 initiatives and pro-democracy activists in 20 countries neighbouring the EU.

The annual report provides an overview of the different political environments in which EED operates - from transitional and restrictive environments, to authoritarian regimes and conflict situations. It looks at the respective challenges that each of those contexts present and gives an insight into examples of EED’s response, results and case studies.

Given the diversity of the regions in which it works, from the Middle East and North Africa to the Eastern Partnership countries and beyond, EED adopts a flexible and unconventional approach, tailoring support to the different realities and challenges on the ground.

“In EED, we invest in transformational ideas and the people behind them. Our distinctive niche lies in our capacity to operate in difficult, often dangerous, environments that are off limits to other donors.

“Through our support, we seek to build citizens’ capacities and strengthen independent voices. A number of these voices ‘tell their stories’ through a series of first person narrative profiles featured throughout the report,” said Pomianowski.

The report also takes an in-depth look at EED’s significant support to independent media outlets across the EU neighbourhood and highlights a number of case studies and success stories. Constraints to press freedoms and violations remain a grave challenge in the region, albeit to different degrees. Approximately one-third of EED supported initiatives are media-related (152 initiatives since 2013).

The report was very positively received by the Committee, with a number of MEPs congratulating EED on its work and achievements.

Petras AUŠTREVIČIUS MEP (Alliance of Liberals and Democrats / Lithuania) noted that, “the critical niche of EED which lies in its flexible position and timely support”. The Chair of EED’s Board of Governors, Elmar BROK MEP (European People’s Party / Germany), paid tribute to “EED’s great work and results in challenging circumstances” and called on those member states which are not current funders, to consider contributing.

Summing up, Pomianowski talked of the “privilege of working with activists who understand what difference it makes to live in a democracy”.

“While the context and realities may differ, the conviction shared by all activists and supported organisations is that strong democracies are the best way of safeguarding human rights and ensuring sustained prosperity.

“We remain staunch in our conviction that we have a moral duty to show, and offer, our solidarity with people who are fighting for the ideals of democracy,” he concluded.

The annual report is available electronically here. We hope that you enjoy reading about the results of our work and the inspiring stories of our courageous partners.