Four Years on: What has become of Tunisia’s Constitutional Promise?

On 26 February 2018, Democracy Reporting International (DRI) and the European Endowment for Democracy (EED) held a debate on what has been achieved in Tunisia since the adoption of its Constitution. 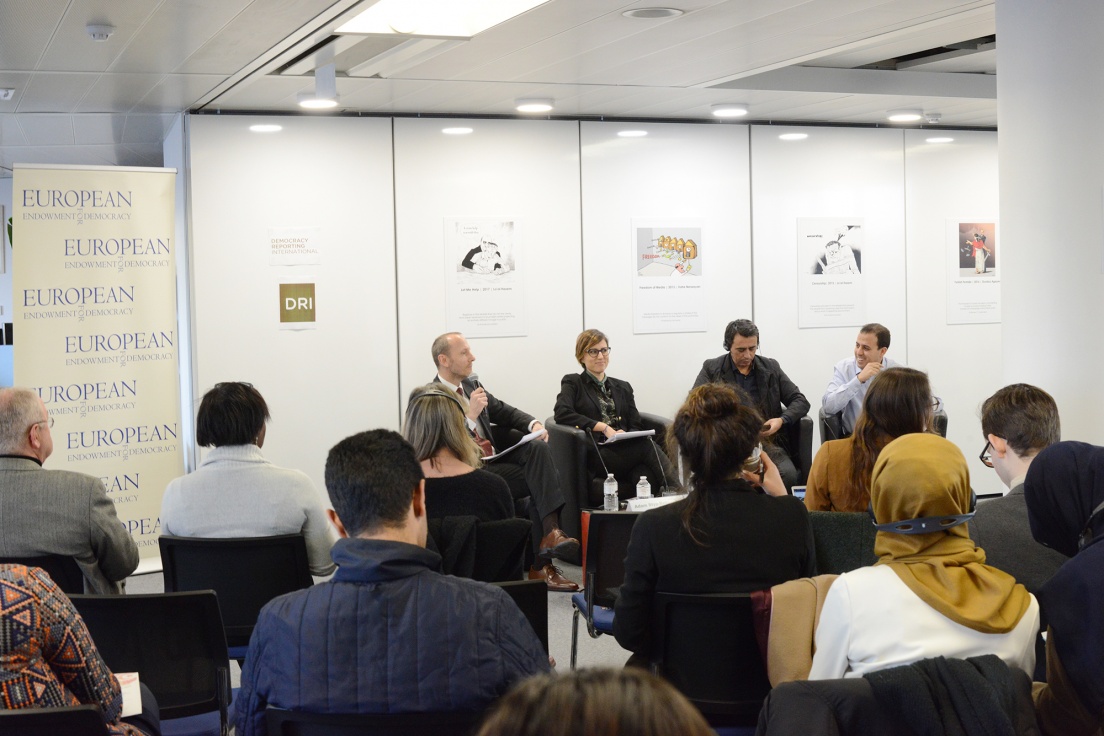 The discussion sought to further understand what the outlook is and what role the EU and its member states can play in supporting Tunisia’s democratisation process. Within the framework of the event, DRI presented its latest Constitutional Monitor of Tunisia, reporting that new constitution fulfils essential elements of democracy, but its implementation is complex and will not be very fast.

Although there have been important achievements since its adoption, such as the organisation of free and fair presidential and parliamentary elections, there are still some provisions of the current legal framework that are worrying and in need of amelioration.

The first speaker, Bochra Belhaj Hmida, Member of the Tunisian Parliament, stressed that there is not yet enough practice and experience to assess the viability of the new constitution. Despite the difficulties, the constitution has brought some positive advances, including 29 articles protecting rights and liberties, in conformity with international standards.

In looking forward, there is a need for unity to further advance the implementation of the constitution and build a foundation for a democratic state and republic, united under the constitution.

Samir Dilou, Member of Parliament, confirmed that although a constitutional text is not enough to guarantee the well-being of a nation, a bad one can confirm its demise. He went on to explain that no proper transformation can take place when the basic institutions and pillars to ensure the functioning of the democratic process are still missing.

Chafik Sarsar, Professor of Law and Political Sciences, on his part stressed the importance of the constitution not being an instrument of everyday politics, and the need to start implementing the constitution before suggesting to reform it. Sarsar also explained the need for structured institutions that will ensure the check on power.

The speakers agreed that in order to build public support for the political reform process and increase citizens’ ownership of the constitution, it was important to increase citizens’ awareness through civic education and address the continued lack of socio-economic opportunities, especially for young people. Tunisia is facing similar challenges than other countries in the region and it is in the interest of the internationally community, and in particular Europe, for the democratic transition to succeed.

The second debate focused on the civil society outlook on the constitutional implementation process. The three panelists agreed that the Constitution was built on a participative approach which included the civil society, fueled by the “euphoria of the revolution” as put by Lobna Jeribi, Founder and President of Solidar Tunisia.

Jouhar Ben Mbarak, Founder and managing Director of Doustourna, stressed that civil society was at the heart of the constitutional debate and able to impose its agenda on the political class. However, the challenge of the transition is to have a civil society that is better equipped to follow up on the technical reforms.

Another challenge that was highlighted was the need to rethink the philosophy of the constitution; the pressure put by the government and the President to one person. So far there has been a strong focus on implementing the procedural aspects of democracy with little progress in advancing socio-economic rights. Jeribi also stressed that with a series of successive governments in place, there is a lack of continuity within the same political majority.The ongoing consensus approach by the two leading political factions leads to a perceived lack of accountability of the coalition parties.

Amine Ghali, the Director of Al Kawakibi Democracy Transitional Centre addressed the nature the Constitution as an elitist text while the immanent laws impact all people, hence the importance of harmonisation. However, this procedure is very lengthy and delayed. He disagreed that the delay of important reforms was purely due to technical and administrative reasons, but argued that there is a lack of political will in the administration to implement certain aspects of the constitution.

Despite an increasingly difficult operating environment, the speakers agreed that the decentralisation process presented an opportunity to strengthen citizens’ involvement in the democratic transition, with civil society acting as a bridge between decision-makers and the community at the local level.