EVENT REPORT | Montenegro after the parliamentary elections: where to next?

On 30 September, the European Endowment for Democracy (EED) organised an online event ‘Montenegro after the parliamentary elections: where to next?’ in light of the surprising election outcome, which saw Montenegro’s first transition of power through elections. Leading civil society experts shared their perspectives on this shift, as well as giving recommendations for the way forward. 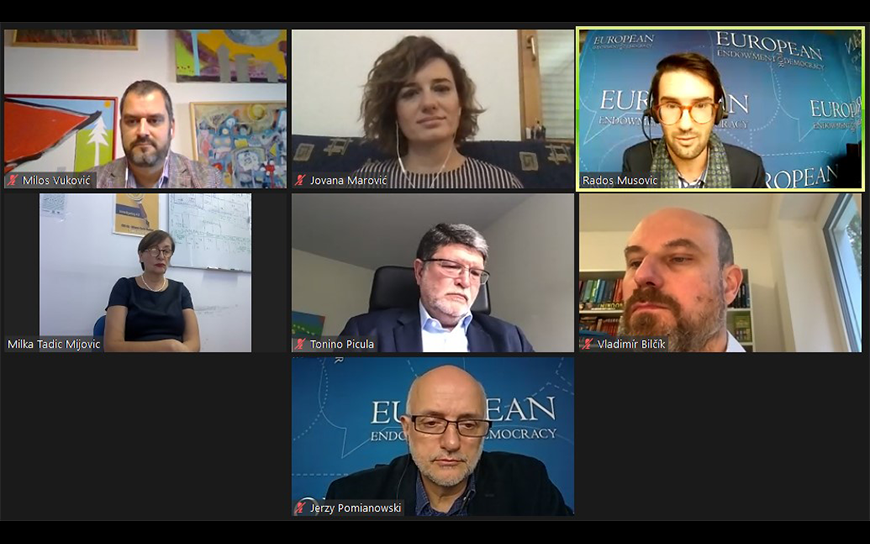 EED Executive Director, Jerzy Pomianowski, opened the discussion, noting that Montenegro is widely considered a frontrunner for EU accession and has aligned with the EU in many aspects, particularly foreign policy. However, he continued that increased levels of state capture, media repression and systemic corruption have led to a regrettable drop on democracy indices. Several high-level corruption affairs and the controversial Law on Religious Freedoms have led to mass protests – of both a civic and nationalist nature – prompting the current power transition.

Tonino Picula, MEP and EP Rapporteur for Montenegro, was next to speak, stating that the citizens of Montenegro have sent a strong message in times of social and economic uncertainty that they expect their elected officials to respect the country’s institutions and constitution. Most importantly, the elections in Montenegro showed that elections can be a trigger for change in the Western Balkans.

Vladimir Bilčík, MEP and Chair of the EU-Montenegro Delegation to the Stabilisation and Association Parliamentary Committee, noted that it has been a long year for the Western Balkans. Although enlargement is fully back on the EU agenda, Montenegro still needs to make significant progress. “Enlargement is not just about words, it is about work and delivery.” Regarding the election result, Bilcik stated that change in a democracy is healthy and he expressed hope that the current change will bring a positive effect for the country.

Moderator and civil society expert, Rados Musovic, first asked all speakers to share their initial impressions from the election night as it was becoming clear that Montenegro would experience its first electoral transition of power in the country’s history.

The speakers expressed a mix of excitement, cautious optimism, and worry. All speakers welcomed the first democratic transition of power – “For the first time, we changed the ruling party with a pencil and without weapons”. Yet some expressed hesitation given previous occurrences where the ruling party managed to hijack progress, as well as due to the nationalistic outbursts by Democratic Front supporters.

Jovana Marović, Executive Director of the Politikon Network, commented that despite initial doubts about the new coalition’s foreign policy course, they have signed an agreement re-committing to NATO and EU membership, and rejecting the possibility of de-recognition of Kosovo. Commenting on the coalition’s civic oriented party, URA, Marović said it remains to be seen to what extent they can balance the other parties with only four seats in parliament. She further noted that progress needs to be made on negotiation chapters 23 and 24 on the rule of law, but that she expects there to be a better fight against corruption and organised crime. Marović also expressed hope that the coalition will take concerted action to avoid clientelism.

Boris Marić from the Center for Civic Liberties and former Minister of Labour and Social Welfare in a previous expert government was asked to comment on the coalition’s capability to depoliticise Montenegro’s public administration. Marić noted that the Democratic Party of Socialists (DPS) has never allowed real administrative reform, but that he worried about the incoming coalition’s lack of governing experience and skills to do so. Marić did note that it is a game changer that Montenegro will have a strong parliament to hold the government and institutions to account, where most parliaments in the region have become ‘practically useless’. It will be crucial to see how the outgoing DPS will behave, namely whether they will fan Montenegrin nationalism or transform into a modern social-democratic party. Marić  noted that it is expected that DPS will be trying to erase evidence of corrupt practices in the transition period. Overall, Marić  stated that change will depend on the strength of the civic bloc in power.

Milka Tadić Mijović, journalist and civic activist from the Center for Investigative Reporting, was asked about the controversial role of the Serbian Orthodox Church. She stated that both Serbian and Montenegrin nationalism are on the rise, but that there is no future for Montenegro without strong civic-oriented parties and policies. Tadić Mijović argued that the new coalition will face several crucial tests in the coming period, not least the health and economic crisis caused by the pandemic. But also, whether they will be accepted by minority groups. Although URA’s strength will indeed be limited, Tadić Mijović stressed that they are not the only civic oriented MPs and that only about 10% of parliament can be classified as having radical nationalist views. More importantly, she added, is that society is asking for changes and that Montenegro’s citizens overall are more mature than the political elite. “All in the Balkans, we are tired of the big topics that prevent our regular lives from improving.”

Miloš Vuković, economic analyst, was asked the age-old question ‘How will we pay for all of this?’ given the dramatic state of the Montenegrin economy. Vuković noted that expectations on this front are enormous, but it will be hard to change this model in the short term. “Public debt has exploded,” to nearly 100% of GDP and nearly 90% of tourism revenues were lost due to the pandemic. Vuković argued that while the EU is Montenegro’s biggest trade partner, the country lacks quality investors from the EU. Vuković therefore recommended closer cooperation with the IMF. He saw an opportunity in the new geopolitical trend to move supply chains back to Europe, as well as in the transition to climate neutrality.

Reacting to the DPS statement denouncing the international community’s acceptance of the election result, Marović stated that everyone who does not support DPS is now being painted as pro-Serbian or pro-Russian. Asked about the future of the relationship with Serbia, Marović stated that there are two Serbia’s – moderates and the regime-backed nationalists - and it is still unclear to what extent these forces will seek to influence the power transition in Montenegro. However, is known that the Serbian government gave €1.5 million to the Church, which was partially used in the Montenegrin election campaign.

An important discussion was held on the future of the Montenegrin media scene. Tadić Mijović stressed that the public broadcaster RTCG needs to become a real public service to ensure media pluralism. She stated that, “Politicians are trying to control the media, and the media will have to continue to fight for its freedom.”