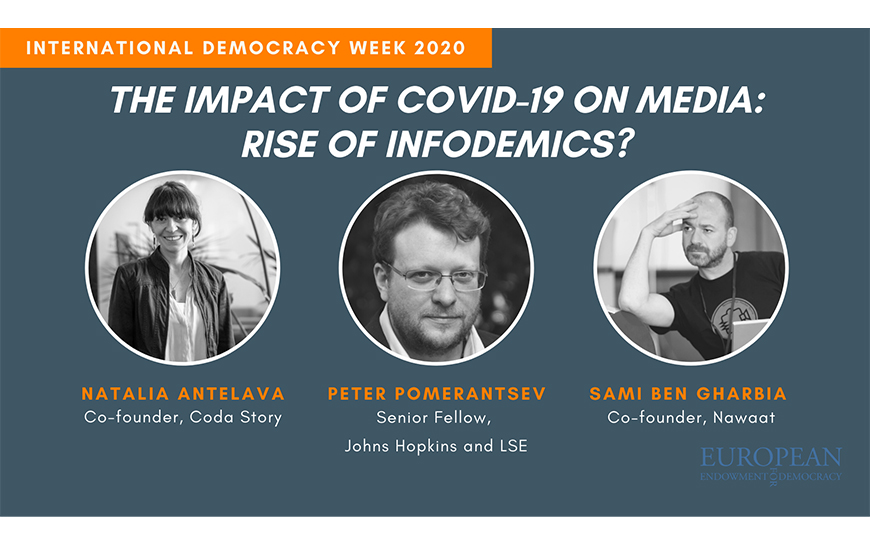 Speakers from across the world shared powerful stories of their challenging experiences trying to fight the spread of disinformation, debunk fake news and strengthen fact checking. In recent years, disinformation and misinformation have become the dark realities of our increasingly connected and technologically advanced world. During the Covid-19, disinformation reached new heights with an avalanche of false information, distorted facts and crude conspiracy theories about the virus.

Bernard Guetta, Member of European Parliament, moderated the discussion. He claimed that fake news are global: they can begin in the USA, spread throughout Europe and land in Northern Africa. People are now questioning doctors’ opinions, as medicine has become politicised as well. People rally against vaccines and on the Covid-19 death toll. Guetta asked the speakers if it is possible to fight fake news, especially on social media and how Covid-19 has affected the media sector.

Natalia Antelava, Co-founder and editor-in-chief, Media start-up Coda Story, stated that it is possible to fight fake news. What is hard to fight is the narrative adopted to tell the fake news. Russia’s narrative blaming the West as ‘weak’ and ‘unable to tackle the crisis’ is a clear instrumentalisation of the crisis. Together with Iran and China, it is involved in storytelling to undermine public trust in democratic countries.

Antelava and her team write articles in Georgian and Russian (and English?), taking global stories and explaining to their nationals how they fit in the local context. It is important to publish in the local language to reach and inform the local audience and engage them in the global issues.

Sami Ben Gharbia, Co-founder of the Tunisian collective blog Nawaat, highlighted how people are led through fake news. There is the hegemony of social media platforms like Facebook where less educated people try to find the truth and are easily manipulated. He is optimistic about the press but pessimistic about the audience.

Ben Gharbia strongly believes in the future of dissident and constructive journalism and his mission is to give voice to the voiceless ad find the truth. Local media can reach the national authorities and reform jurisprudence thanks to whistle-blowers efforts.

Peter Pomerantsev, Visiting Senior fellow, LSE, Producer, Author of “Nothing is true and everything is possible”, explained how authoritarian regimes use freedom of expression against the civic society and aim to divide people. They do not use censorship but they exploit emotional categories and cultural identity.

Something has broken between the freedom of expression, media pluralism and the free self. There is no declaration in the human rights law, which speaks of disinformation, and it is hard to find an argument against it. Pluralism is now divided into sponsorship and polarization.
Pomarantsev underlined how dangerous the idea of the ‘free self’ is. On social media, anyone can express their ideas but their data is then shared with political stakeholders who will try to create propaganda.

He stills believes in media pluralism, but it is necessary to regulate disinformation based on the respect of human rights. He argued that theEU should define a clear legislation on cyber space.