On 8 September 2020, the European Endowment for Democracy (EED) and the EU delegation in Serbia organised an online event ‘New EU support to be provided to assist Serbian media during COVID-19 pandemic’ to launch and provide information on the new 2.4 million EUR project supporting Serbian media funded by the European Commission. 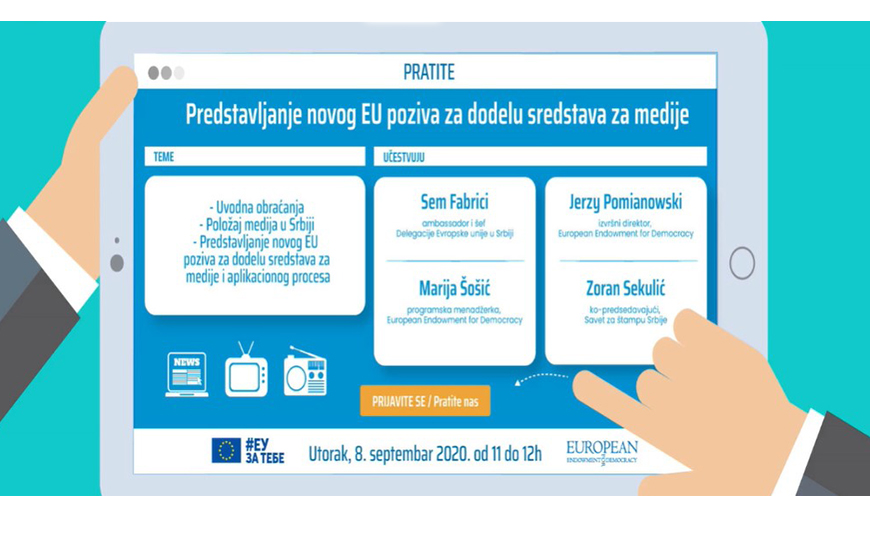 The event was opened by the Ambassador of the EU in Serbia, Sem Fabrizi, who spoke of the difficulty the media sector is facing as a result of the COVID-19 pandemic. He stated that in addition to the medical support provided in March/April, the EU is now supporting local media – particularly smaller outlets – to survive in the economic downturn resulting from the pandemic. The Ambassador highlighted the Media Strategy adopted by the government, which focuses on issues like the safety of journalists, media ownership, transparency, and media regulation – all of which are crucial to the EU accession process.

Jerzy Pomianowski, Executive Director of the EED, introduced the work and mission of the organisation. He noted that the EED has already been supporting media in Serbia as part of its Western Balkans programme. Although the media context was already difficult and required support, the challenges media actors face – both economic and political - have grown more numerous since the start of the pandemic. As an example, he highlighted the high-level arrest of journalist Ana Lalic of Nova.rs because of an article she wrote on the lack of PPE in the Clinical Center of Vojvodina. He stressed the importance of plurality in media so audiences can have the ability to verify information, particularly in a context of mass disinformation related to the pandemic. ‘Media should not just be free and critical, but also many.’

Zoran Sekulic, Chairman of the Press Council, gave an overview of the pressures faced by media in Serbia. While highlighting the effect of the pandemic, he stressed the fact that the media situation in Serbia has been getting worse for several years as confirmed by the last European Commission report. He further stated that while substantial progress will take years, this project has come just at the right time to help independent media survive in an increasingly controlled and repressive market. ‘Covid is just the tip of the iceberg’.

Marija Sosic, EED Programme Manager for the Western Balkans, provided more specific information on the project, including the EED’s objective, who can apply, the type of funding and additional support available, and thematic areas for support. She highlighted the demands-based and flexible approach of the EED and gave an overview of the application process.

The event was well-attended with around 110 participants following the live feed throughout the session and a series of questions from interested parties.