Echoes from Syrian civil society: “Like everyone, we want freedom, democracy, dignity.”

On 29 March, EED held a discussion in cooperation with Action Syrie with two Syrian pro-democracy activists. EED partners, Majd Izzat al-Chourbaji and Karam Hilly, talked about their struggle, and despite all, their unwavering hope for the future. 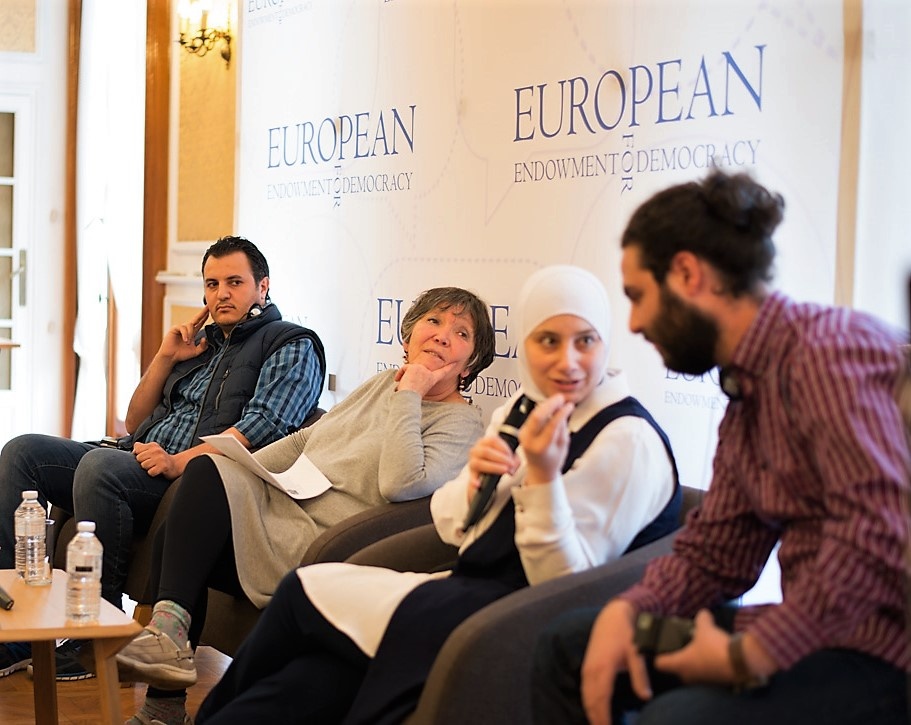 Moderated by member of Brussels Regional Parliament, Simone Susskind, the event offered a unique opportunity to hear directly from voices on the ground. While often overlooked in the devastation of the ongoing conflict, Syrian civil society has played and continues to play a crucial role in supporting its communities both inside Syria and abroad.

In his opening remarks, EED Executive Director Jerzy Pomianowski, paid tribute to the resilience of civil society, and the two activists speaking at the event:

“For us at EED the indicator of our success is reflected by our partners: they are the courageous people working tirelessly in pursuit those values that we believe in – freedom and democracy. In Majd and Karam, we have two outstanding examples.”

“Women will build the future”

Fearless reform advocate in her native Syria, Majd Izzat al-Chourbaji told the audience of her journey from start of revolution in 2011. Detained by government forces in December 2012 after helping to spearhead non-violent protests against the Assad regime in her hometown of Darayya, she was eventually released in July 2013. She never saw her husband again; detained as he tried to plead for her release, he succumbed to torture in prison.

Al-Chourbaji said that her story mirrored “the story of every Syrian”. Despite terrible hardship and loss, she remains upbeat and determined to keep the democratic struggle alive.

“Sometimes it seems as though the war will never end but we won’t give up. Syrian people don’t give up. We want freedom, democracy and dignity - just like everyone else.”

Al-Chourbaji now runs EED-backed Basamat for Development - an NGO she established in 2014 in Saadnayel in Lebanon’s Bekaa Valley on the Syrian border, to empower Syrian women who, like her, have fled the devastation of their country. Basamat provides training on everything from sewing and cooking to politics and civic education, language courses and IT to help refugee women become self-sufficient.

“So many women have lost their husbands in the war and find themselves solely responsible for their families. We need to empower these women. It will be women who bring about peace and who will be instrumental in building the future.”

Karam Hilly has also dedicated his life to building a new future for Syria. He coordinates the ‘Sahem’ initiative that offers training and capacity building on active citizenship, community engagement and social responsibility, local economy and self-sufficiency.

“Sahem means ‘contribute’ in Arabic and that is what we have dedicated our lives to doing. We have one life. If we have a choice to make a change in this world, I believe we should choose to do that.”

Started in February 2015 in the northern part of Syria, Sahem received support from EED, which, according to Hilly was the “trigger for change”. Through the initiative, Hilly is helping to build a civic movement - “Youth of Change” - with more than 20 local committees in three provinces. Working with both the local administration and their local communities, the committees encourage greater participation of local people in civic life.

Based in Turkey, Hilly returns regularly to Syria at great personal risk to himself to continue his activities and support the civic movement.

“Because of the friends that I lost, I feel that I have to go, I have to keep working. Through my community organising, I am able to advocate, to speak out loudly and help people understand their rights and develop the tools they need to help them rebuild in Syria.”

So far, the war in Syria has killed an estimated 400,000 people and displaced half the country’s population. The conflict show little sign of abating. But against all the odds, Hilly remains optimistic:

“We do not know what the future holds but everyday life for us is a practice for democracy, a practice for change. We hold great hope that we can make change inside of Syria. And we are working today for a better tomorrow.”

See recording of the event

POLITICO: The Playbook interview – with Majd Chourbaji and Karam Hilly …