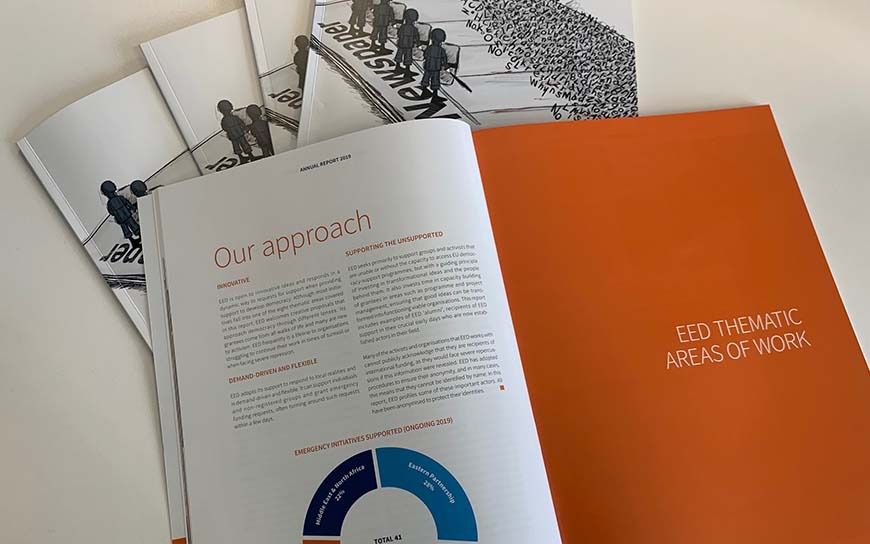 During his address, Pomianowski stated that this annual report presents the work of EED and its partners during 2019. The report is structured around the eight thematic areas of EED’s work namely: Anti-corruption and public accountability; Independent and social media platforms; Civic activism and participation; Human rights activism and monitoring; Women’s civic and political participation; Inclusive society, sexual orientation and gender identity; Arts and culture; and Youth.

He noted the work of EED partners featured in this report, such as WatchDog.md, a whistle-blower organisation in Moldova; Beirut Today, an independent news platform in Lebanon; Women’s Rights House  in Armenia and Ramy Khouli, in Tunisia.

Pomianowski also spoke of the challenges faced by democracy activists during the Covid-19 pandemic, outlining that EED as a flexible organisation, has quickly adapted to changing needs and the realities of our partners. During this period, EED has provided important support to independent media throughout the European neighbourhood as well as to civil activists directly responding to the health crisis and monitoring the state response.

He outlined the challenges faced to global democracy at this time, stating that today is also the day that the Open Letter to Defend Democracy signed by over 500 political, civil leaders, Nobel Laureates and pro-democracy organisations including EED.

He stated that EED has also collaborated for the publication of a policy paper entitled Global Democracy and Covid-19: Up-grading international support that complements this letter. This report assesses the impact that Covid-19 is having on democracy worldwide and calls for stronger and reformulated international democracy support. The report provides five concrete recommendations to governments and international organisations to guide democracy support now and in the post-Covid-19 future. This report will be published next week.