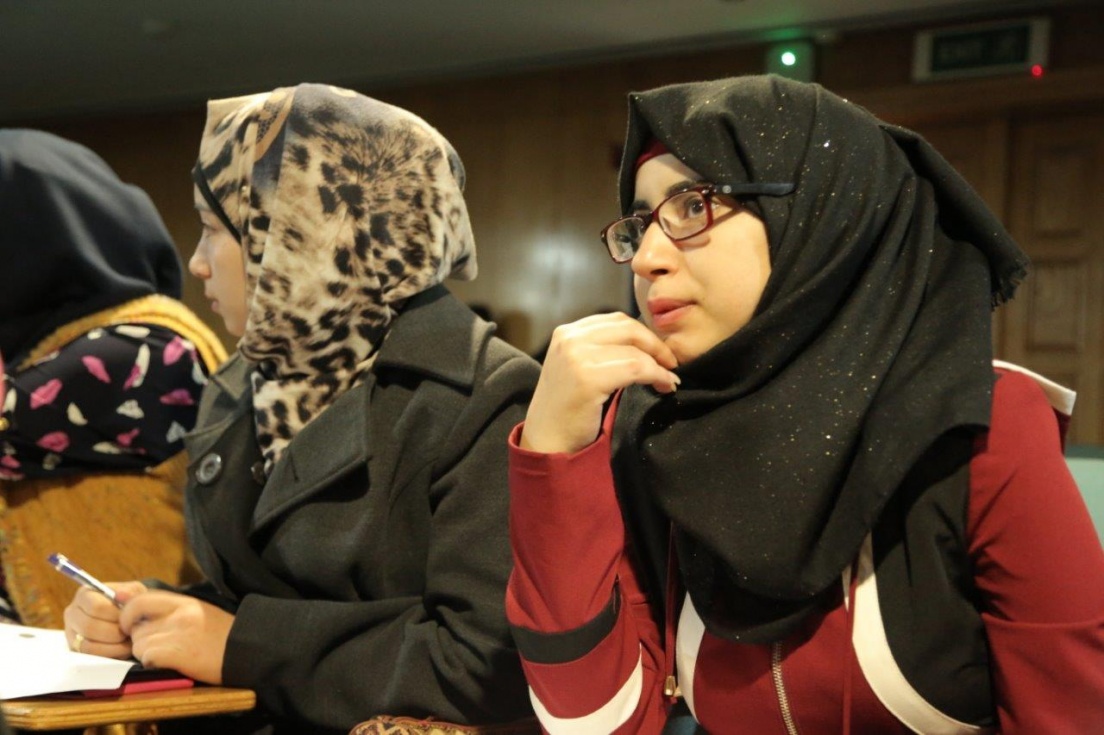 Participants of the screening organised by Shashat Women Cinema

In a recent interview, Shashat Executive Director Alia Arasoughly, told EED about its latest initiative. “What’s Tomorrow”, supported by EED, provides a platform to help young people to voice their grievances, as well as their aspirations in a safe environment.

1. What was the main driver behind “What’s Tomorrow”?

Marginalised and silenced in their own society, young people in Palestine feel powerless to change their situation or policies affecting their own lives. With few avenues for expressing their grievances constructively, more and more are turning to more extreme measures – withdrawal from engaging in social issues, violence and extremism. This has major ramifications for promotion of democracy and communal peace.

This is the backdrop to “What’s Tomorrow” – a three-year initiative which brings together youth and local communities to discuss what their ‘tomorrow’ looks like. At the outset, Shashat is an NGO dedicated to developing the work of women in film. Centered around screenings of four films made by young Palestinian women on the theme of ‘tomorrow’, the initiative provides an open space for constructive debate and dialogue on issues facing youth. It also provides a framework for local communities and universities to be aware of and address the concerns of youth in their communities.

2. You recently conducted numerous screenings of the films. How were they received?

The films were shown 92 times! Nearly 6,000 people attended the screenings and the discussions which followed in both the West Bank and the Gaza Strip. We were very positively surprised by the large number of participants, as well as the impassioned debates.

Emerging from the discussions was an overwhelming sense that young people did not feel hope for the future. Instead, most expressed deep anger and pessimism about themselves, their communities and the situation around them. Despite this, many also expressed a sense of agency, emphasising that their future depends on themselves and not anyone else. This to me demonstrates the power of the films, showing how despair and anger can be transformed into constructive messages. You can see some of the discussions here.

3. What impact do you think the films had on how young people view their future and of women as agents of change in Palestine?

Most audience members and the media felt that the women filmmakers were agents of change through their courage in making the films they did, being either whistle-blowers or bringing taboo subjects to the fore as well as transforming their pain and despair into creative stories which transcend the personal experience and become communal. Young participants saw hope, power and courage in the creative acts of the four filmmakers, as well as in the female protagonists. They also felt that the films forced them to face themselves and gave them an opportunity to talk to each other freely without fear or self-censorship.

4. There are numerous civil society initiatives targeting youth in Palestine. How is “What’s tomorrow” different?

What distinguishes Shashat and “What’s Tomorrow” is that since 2005 we have pursued a strategic long-term vision of social change through cultural interventions reaching the grassroots. We follow a philosophy that cultural products have to be relevant to people’s experiences for them to have an impact on the change of the values and emotional fabric of society.

5. What are the next steps?

As we are moving into the second year of the initiative, we will bring forward the issues raised by the young people to local and national attention. The results will be compiled in the “Youth Status Report”, which will be published and discussed in different governorates. Furthermore, a group of selected youth, local community leaders and organisations, and the media will come together to discuss a preliminary draft of a Youth Status Report (YSR) based on results of the screenings and discussion reports. They will provide important feedback on the YSR and the current predicament facing young Palestinians from different perspectives that will feed into the YSR.

6. Given the negative outlook of young Palestinians on the future prospects, what more could be done to empower them?

This is really the challenge. A solution for addressing the pessimistic outlook will have to be based on the feedback received throughout the initiative and formulated on the basis of quantitative and qualitative data, as well as focus group meetings. This is the only way to articulate a viable and legitimate solution, and it has to emerge from youth voices themselves.