On 10 September, the European Endowment for Democracy (EED) hosted a panel debate focusing on the civil society perspective of the post-revolutionary developments in Armenia. The event was co-organised with the Eastern Partnership Civil Society Forum. 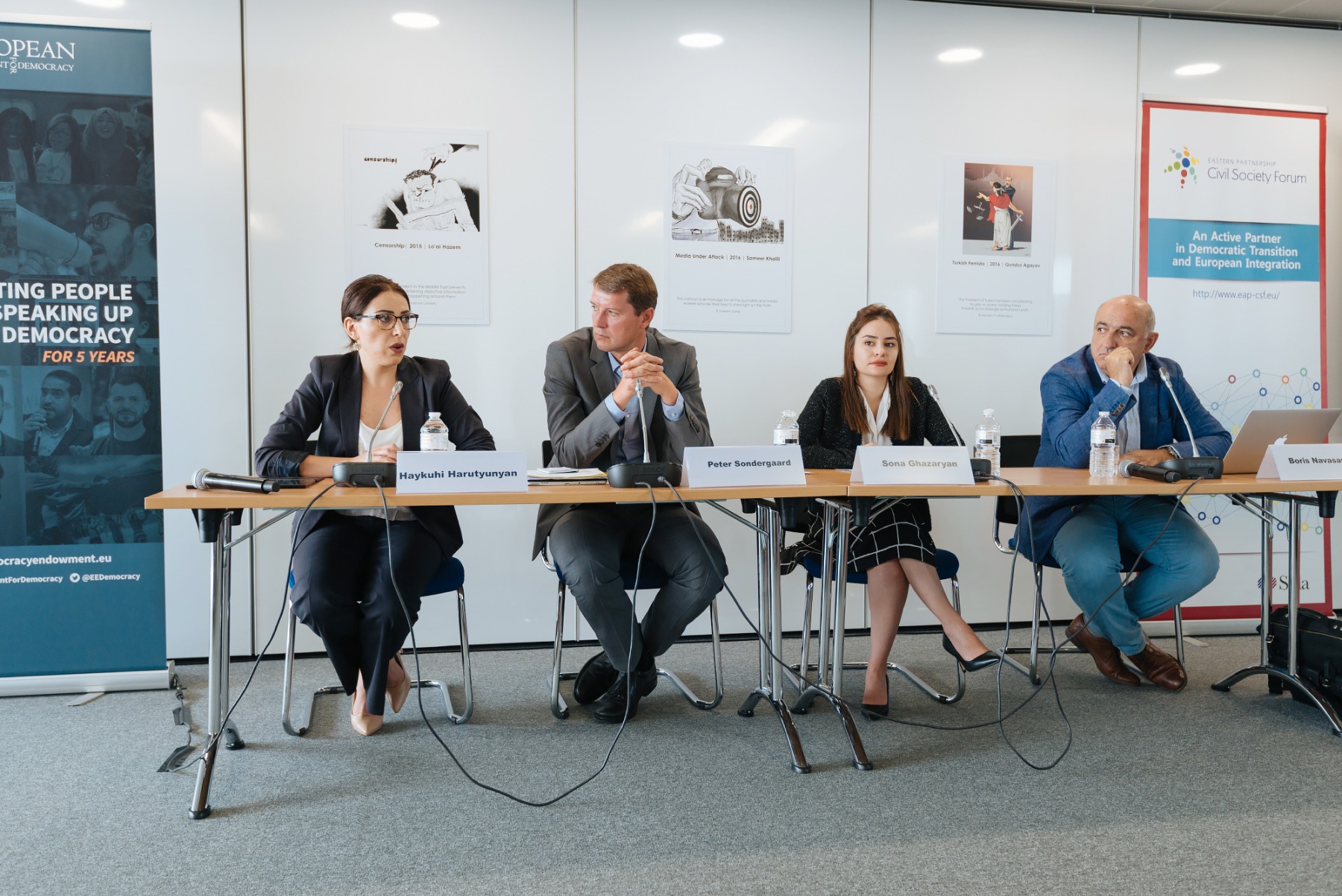 “I firmly believe that this is a revolution and not a transition [of power], because I don't see just the change of people, but I see change of values, I see the change of the working culture and this is the most important for me,” said Sona Ghazaryan, an activist from No Pasaran / Reject Serzh movements. Haykuhi Harutyunyan of Protection without Borders, who elaborated on concrete benefits of the Armenian Velvet Revolution, pointed to the improved situation of human rights in prisons and increasing public trust towards police. She noted that people are not afraid of demanding changes and organising protests in front of public institutions. “It is basic, but very important,” noted Mrs. Harutyunyan.

Despite many reasons for optimism, the situation in post-revolutionary Armenia remains complex, since the new elite led by Nikol Pashinyan inherited the old institutions and policies serving interests of narrow group of oligarchs. This was confirmed by Boris Navasardian, head of the Yerevan Press Club, who spoke about resistance of the counter-revolutionary forces who are now trying to discredit and undermine the new authorities in effectively implementation of the necessary reforms. Critics often point out the general lack of experience and competence of the new authorities, who are still learning to manage the state. In this regard, the upcoming Yerevan City Council elections, slated for 23 September, will be crucial test for the new government and civil society alike.

The current discussion on transitional justice represents another major challenge for civil society and the government, both to explain the concept and to set up the necessary structures. In addition, Mr. Navasardian pointed to the ongoing tensions between environmental activists and government on the mining industry, which could undermine the trust of foreign investors. He concluded: “The nearest months will show how much the new government is ready to resolve all of these problems and to what extent the cooperation with the EU could be helpful for that and implementation of CEPA.” Panellists underlined that the Comprehensive and Enhanced Partnership Agreement (CEPA) with the EU requires a new set of priorities and general revision to better respond to Armenia’s current needs vis a vis the reform agenda.

These challenges are reflected in the country's media sphere, which is also going through turbulent changes. New media and social networks boomed during the Armenian Velvet Revolution and are actively used by the new authorities, including Pashinyan himself. As noted by the speakers, the new prime minister uses Facebook live streams to talk directly to the citizens following the logic of direct democracy. Despite obvious technical problems and geographic differences, Mr Navasardian emphasised that for now this is the only way to overcome stagnation and the institutional blockade in the parliament. Nevertheless, it is not possible to use the methods of direct democracy in the long run, he added.

In April and May 2018, tens of thousands of Armenians took to the streets to peacefully protest against the election of long-term leader Serzh Sargsyan (the country’s president for 10 years) as Prime Minister. After ten days, protestors achieved their first demand and the protest leader, Nikol Pashinyan, was later elected the country’s new leader. The revolution has been coined as the ‘Velvet Revolution’, or the Revolution of Love and Solidarity. Read more in this article by Eurasianet.