Global Media Forum 2019: Workshop on Shifting Power Back to Citizens

On 27 May 2019, three EED partners from Kosovo, Montenegro and Turkey addressed a packed house of media professionals for a workshop on people power as part of the 2019 Deutshe Welle Global Forum. 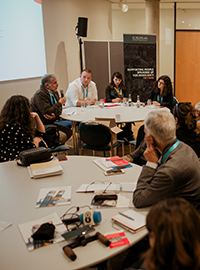 On 27 May 2019, three EED partners from Kosovo, Montenegro and Turkey addressed a packed house of media professionals for a workshop on people power as part of the 2019 Deutshe Welle Global Forum. Moderated by Turkish journalist, Gülsin Harman, the EED-organised workshop entitled “Shifting power back to the citizens” focused on the media landscape within the partners’ countries, best practices, and the ways they are working to shift power back to the citizens of their countries.

Miodrag Vujović, Secretary General of Organizacija KOD, explained that today’s Montenegrins no longer believe in politicians and NGOs and young people join a political party to ensure they get a safe and decent job. As he put it, “If you are defending the system, the system will protect you.” He noted how this approach has contributed to political and social stalemate in the country and has helped keep the political elite in power. Organizacija KOD is working to change this by encouraging civil activism through volunteer engagement. They focus on ordinary citizens focusing everyday problems and work to solve them, helping to restore power to the people. Previous campaigns have focused on planting trees, closing pipes that discharge waste materials, tackling the high price of medications, reacting to decision makers’ policies and the allocation of budgetary funds. The organisation encountered much scepticism at first, but Miodrag described how they have achieved some positive results through their communications on social media and through their work, people are gaining confidence in their own power to bring about change.

Besa Luci, chief editor and founder of Kosovo 2.0, explained that Kosovo has a large population under the age of 30 which is widely disregarded by politicians. As the only only media project in the region working in Albanian, Serbian and English, her organisation tries to engage these young people by reporting on issues that interest them which are normally not addressed in the media, such as religion and sexuality. “We receive many positive comments about our work from young people,” she said. Besa stated that Kosova 2.0 also works to challenge the prevailing negative narrative about Kosovo, which mainly comes from external forces, and to become an equal voice in debates. She stated, “history is something that the people should possess, and they should be involved in writing the narrative.” Their goal is to contribute to a different kind of reporting; this is why Kosovo 2.0 produces diverse materials like magazines and blogs, as well as organising a physical space where people gather and discuss content and issues they write about. The organisation uses social media and hashtags to build stories and they encourage youth to use their hashtag “I want to know” when asking questions of politicians.

Ruşen Çakır, founding member and chief editor of Medyascope, explained that his media outlet aims to produce quality journalism whilst staying independent, which is very difficult in today’s Turkey. Medyascope is an online news channel as well as a content sharing platform open to anyone that uses social media and new technologies to broadcast independent programmes. They publish content in Turkish, Kurdish, Persian, English and German, and are trying to launch French and German weekly journals. Medyascope wants to be perceived as original and objective, covering all perspectives. Asked about the difficult environment for journalists in his country,Ruşen confirmed that, “anything can happen in Turkey at any time,” and that it is impossible to show any kind of political support openly. Nevertheless, he concluded that “journalism is possible in any conditions.”

The speakers engaged in a lively debate with the audience, with questions posed a variety of topics including on fostering youth engagement, how to survive in the shrinking democratic space, and on how to build sustainable organisations.

All EED partners highlighted that they are not looking for a quick fix but they are working to engage readers, citizens and youth in the long term. They aim to provide citizens with a credible alternative to government driven news, and to incorporate them in the news process itself, often asking supporters for input on topics that they would like to read about.