Freedom and Justice for Syria’s Disappeared: What Can the EU Do?

One hundred thousand Syrians have been detained or have disappeared since the beginning of the Syrian uprising in 2011. 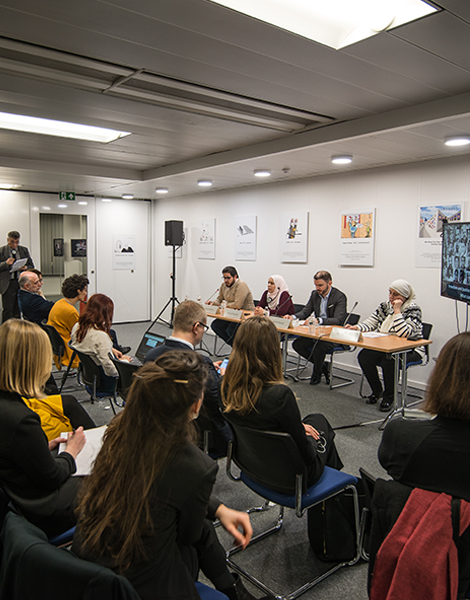 Sadly, arbitrary detention and enforced disappearance have become a daily reality in Syria affecting hundreds thousands, if not more, Syrian families all over the country. Access to justice and the right to truth have been systematically denied to the victims and their families.

Representatives of three Syrian victims groups gathered at the EED office in Brussels on 19 February to inform the EU audience about the fight for freedom and justice by detention survivors and families of the disappeared, in view of the upcoming Brussels III Conference on Syria in March.

Ahmad Helmi narrated the story of his detention in nine different prisons. During this period, his mother managed to visit him every week. This kept him alive, also in light of the fact that some of his best friends died under torture in detention. Ahmad founded Ta'afi, a Syrian programme to support, protect and rehabilitate survivors of political detention. He underlined that Syria is the most documented crisis in the world, this is why the EU and its member states must put pressure on Syrian authorities to shed light on these issues.

Amina Kholani fled Syria in 2014 after her release from prison. Three of her brothers died in detention. Her husband was also arrested and tortured in front of her. She explained how one of her brothers once asked her not visit him again because inmates were tortured after they received visitors. She never saw him again. She also informed the audience about the disastrous situation of detained women who are subjected to social pressure after their time in prison: many are divorced by their husbands and become estranged from their families. Amina is a founding member of Families for Freedom.

Mariam Hallak, a school teacher for 25 years, is the mother of Doctor Ayham Ghazoul whose picture she found in the leaked Caesar files two years after his arrest. She explained how one day her son was arrested at Damascus university and tortured right there - there was a space for torturing people inside the university! She decided to lodge a complaint against the Syrian intelligence service because she did not receive any information about her son’s whereabouts nor his personal goods. Six months later she received his death certificate.While there is strong evidence that Ayham died of torture, the death certificate mentioned a heart attack. Mariam is a founding member of the Caesar Families Association.

After these three extremely moving personal stories, audience and participants discussed issues such as the few existing legal remedies such as the recourse to universal jurisdiction that has led to the recent arrest in Germany of two former high-ranking members of the Syrian Intelligence based on allegations of crimes against humanity. The role of the international community, the EU and Syria’s backers such as Russia to support access to justice and the right to truth for Syrians was also discussed.

In view of any political process, participants highlighted that victims of gravest human rights crimes have to be taken on board: “Syrian reconstruction cannot happen over victims’ bodies! The crimes of Syrian authorities have to be addressed!”

In their closing remarks, participants formulated their key demands to Syrian authorities and asked the Brussels audience for support:

They asked the audience to write to their Foreign Ministers and Members of Parliament, as well as to ask candidates running for the European Parliament what they are doing to support these demands.