On 3 March, the European Endowment for Democracy (EED) organised an online webinar called ‘Kosovo after elections: power rotation or paradigm shift?’ to discuss the results of the parliamentary elections held on 14 February. Experts from the fields of politics, media and civil society gave their perspectives on the election results as well as their projections of what awaits Kosovo and the incoming government. 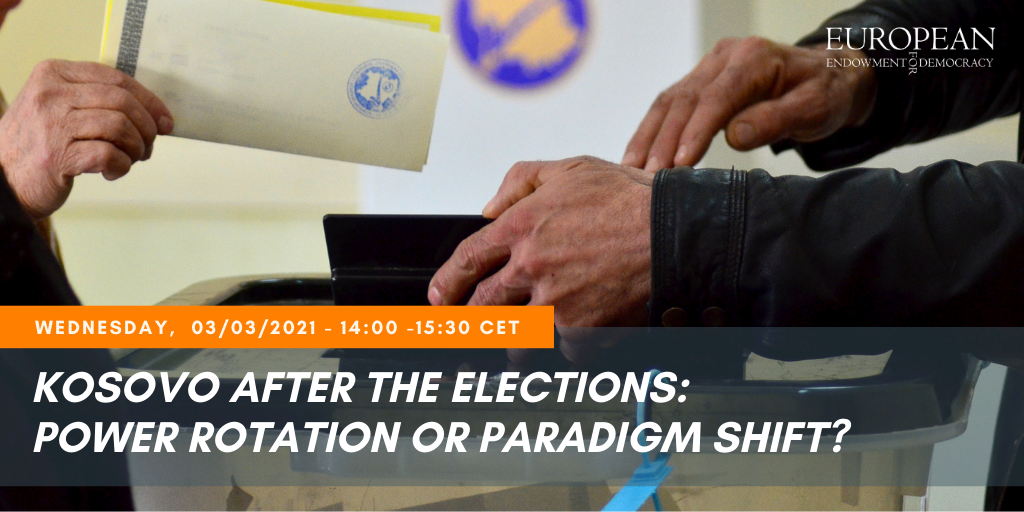 On 3 March, the European Endowment for Democracy (EED) organised an online webinar called ‘Kosovo after elections: power rotation or paradigm shift?’ to discuss the results of the parliamentary elections held on 14 February. Experts from the fields of politics, media and civil society gave their perspectives on the election results as well as their projections of what awaits Kosovo and the incoming government.

Opening remarks were delivered by Lukas Mandl, Member of the European Parliament and EPP Shadow Rapporteur for Kosovo to the European Parliament in which he highlighted the significant opportunities provided by the election result. He expressed his optimism regarding the next government and its ability to stabilise public administration, rule of law, education, and healthcare, among other fields, as well as its ability to project this image of stability to the international community.

For Vlora Çitaku, former Ambassador of Kosovo to the United States, the most important takeaway of the elections was that, “in Kosovo, democracy works.” In contrast to many countries in the region, the results were announced the same night of the elections; they were uncontested, and even gracefully accepted. She continued that this countered the popular narrative that Kosovo is a captured state and that its institutions don’t work. Çitaku also highlighted the importance of women’s votes, which polls have shown were decisive in determining the election result.

Regarding Kosovo’s current standing and perception in the international community, Çitaku shared that incoming Prime Minister Kurti has a clear mandate to lead Kosovo and make the necessary reforms. She added that the EU must now be ready to do its part and accept the willingness of the United States to cooperate to ensure a better future for Kosovo. Çitaku highlighted that Kosovo is by far the most pro-EU country in the region, but that this should not be taken for granted. “The people of Kosovo do not deserve to be treated as second-class citizens in Europe,” she noted.

On the topic of dialogue with Serbia, Çitaku stressed that integration of the Serb community will remain blocked as long as Belgrade continues to use Serbs abroad as a foreign policy tool. She concluded by saying that, “dialogue with Belgrade must have a timeline, and dialogue with Kosovo Serbs must continue always.”

Visar Ymeri, Director of the Musine Kokalari Institute, commenced by saying that people’s expectations are very high following the elections and that many feel that, “this is our final chance.” Ymeri stressed that this was an unprecedented election result with the highest level of engagement in Kosovo’s recent history. “Voters in Kosovo are very aware of what they’re running away from: twenty years of corruption, nepotism, mismanagement, and organised crime. But they don’t yet know what they are entering into.”

Ymeri added that the incoming Kurti government is expected to deal with internal problems, but that there will be an increase in pressure for dialogue with Serbia to reach an agreement. He noted that it was problematic that the dialogue was barely discussed during the election campaign, before subsequently becoming one of the key issues following election day. Speaking about his expectations for the new government, Ymeri stated despite his concerns, “I still believe that Kurti is going to do some reforms that will put Kosovo on a better track.”

Lavdim Hamidi, Editor-in-Chief of Front Online, spoke of the worrying trend of increasing violence against journalists in Kosovo, noting in particular the recent attacks on Valon Syla and Visar Duriqi. Hamidi expressed particular concern that such attacks are no longer widely condemned by the public, which has led to a normalisation of this violence. He added that many media and civil society organisations have lost their objectivity and openly align with specific political actors or parties. noted the political control over advertising, now amplified as a result of the Covid pandemic. He added that high-ranking officials of Vetevendosje have in the past shown an antagonistic discourse towards media, and that Kurti gave interviews very selectively during the election campaign, avoiding those outlets that criticised him. Hamidi expressed his hope that this stance towards media will shift more positively as Vetevendosje forms the new government.

Jovana Radosavljević, Director of the New Social Initiative, provided her perspective on how the election impacted the Kosovo Serbs and other non-majority communities. She emphasised the growing concern of international and Kosovo-based actors that Srpska Lista seems to be solidifying its monopoly on political affairs within the Serb community. She noted the widespread concern related to Srpska Lista allegedly influencing the vote of other non-majority communities, but noted that similar statements have been made about Albin Kurti’s Vetevendosje.

Viola von Cramon, MEP for the Greens/EFA and Rapporteur for Kosovo to the European Parliament, concurred with the observations that the expectations of the people of Kosovo should be managed and calibrated, given that, ‘they are almost impossible to live up to.” She added that it remains to be seen whether this result was because of Kurti’s appeal or because of the failure of other parties. Von Cramon expressed her understanding for the high level of frustration among the people of Kosovo as the European Council has not yet approved visa liberalisation, and stated that she is continues to lobby in favour of approval at every opportunity. On the topic of the dialogue with Serbia, Von Cramon added that the EU needs to stop sacrificing democratic indicators for progress in terms of dialogue. She added that this dialogue should be complemented by an engagement with Serb and other non-majority communities in Kosovo, which Kurti has not done extensively in the campaign. Von Cramon noted that as Chief Observer of the last snap elections, 53 recommendations were made to improve the conduct of elections – none of which were implemented for the 14 February elections. However, she commended the more programmatic approach to the electorate, with a focus on education, healthcare, and social issues.