Debunking disinformation about Covid-19 in the Western Balkans

Zasto Ne from Bosnia Herzegovina have never been busier than today during the Covid-19 crisis. Its team of fact-checkers are working around the clock to debunk the deluge of disinformation in the media and they are communicating this to young and old alike via their website and social media. 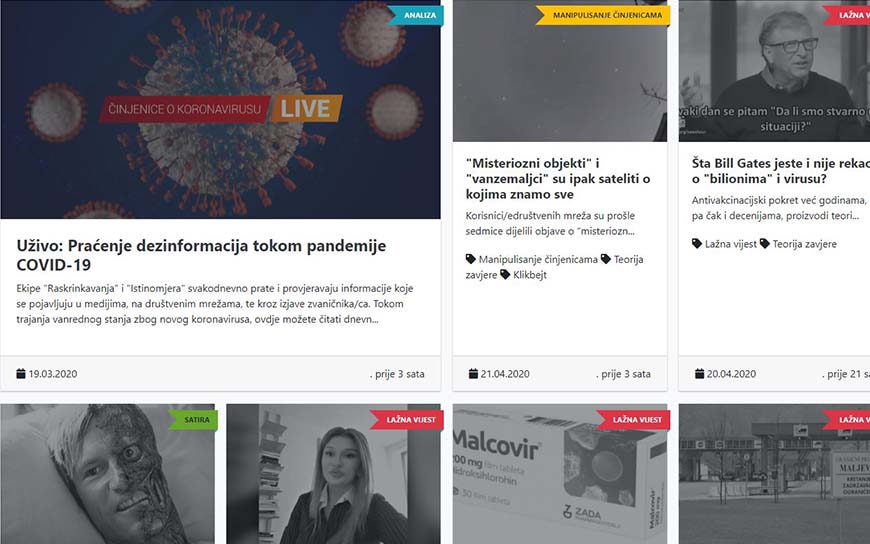 Darko Brkan, the director of Zasto Ne – or Why Not – says his biggest challenge these days is getting enough sleep. He worked until 3am the night before he speaks with EED, reading and editing articles for Zasto Ne’s fact-checking website.

“We have never seen anything like this before,” he says. “Since mid-March, there has been a deluge of disinformation about the coronavirus. Name it. It’s out there: fake news pseudo-science, conspiracy theories, manipulation of facts. At the moment we probably have 25 to 30 articles in the pipeline at any one time.”

Bosnia and Herzegovina is an ethnically diverse society with a highly complex political structure, which includes a national government, the division of the country in two entities: Republika Srpska and the Federation of Bosnia and Herzogovina, as well as canton and municipal governments. This political complexity means that accountability of public officials is an ongoing challenge and there are high levels of corruption. The media is widely manipulated by political and business interests and disinformation is frequently used a means to maintain tensions between the country’s various ethnic groups.

Brkan and his colleagues have long been aware of these challenges with Zasto Ne now in its nineteenth year of operation. Keen to raise awareness about political and media accountability among young Bosniacs, they first set up www.istinomjer.ba – or 'truthometer' – in 2010, as an online platform to fact-check local politicans. Then In 2017, they then set up raskrikavanje.rs which is focused on debunking disinformation in the media, improving young people’s media literacy and their ability to distinguish fake news from real news.

These days, it is the media fact-checking platform Rasrkinkavanje.ba that is the focus of Brkan’s attention. In March, the platform had 200,000 views, four times its average monthly views. April looks like it will be an even busier month.

Ranking articles according to type of disinformation

Zasto Ne have developed a methodology to rank articles according to the type of disinformation they contain. They identify 14 different types of disinformation, from what Brkan describes as the worst offenders: false news, fake or fabricated news, to less serious disinformation, such as manipulation of the facts, or coming to the wrong conclusion based on facts, pseudo-science, conspiracy theories, censorship, spin to what he class ‘greener types’ of disinformation such as unintentional error or satire.

His team of fact-checkers rate articles according to this methodology and then add that rating to the media outlet’s overall ranking; media which publish articles revealed as fake news are included within the site’s red list.

Today, there is so much fake news being published that Zasto Ne have had to employ additional fact-checkers, and they are also increasingly relying on crowdsourcing and their readership to verify the veracity of information. About half of the team’s work today is reviewing and then republishing fact-checks from throughout the world as they adapt this work to Zasto Ne’s methodology. They are also establishing a database of experts who can quickly verify any information related to the pandemic.

The team usually give media outlets 24 hours to correct any errors before they publish their articles, but as up to 60 percent of the portals they monitor are anonymous, this is not always possible.

Recent articles published on the website dispel widespread myths that have inundated social media in recent weeks, such as: purported links between 5G networks and Covid19; how exposure to temperatures above 25 degrees prevents coronavirus infection; that people cannot recover from Covid-19; that the ability to hold your breath for up to 10 seconds every morning is a sign people do not have the coronavirus; and rumours that salty water, ginger and cinnamon can protect people from the virus.

EED funding has enabled Zasto Ne to repackage these news-stories as Instagram stories, quizzes and games that are more appealing to young people. During the current crisis, the team have already developed a number of Instagram stories on Covid-19 as well as fun quizzes that debunk commonly held conspiracies. Brkan sees these is a particularly effectively way of communicating with young people. 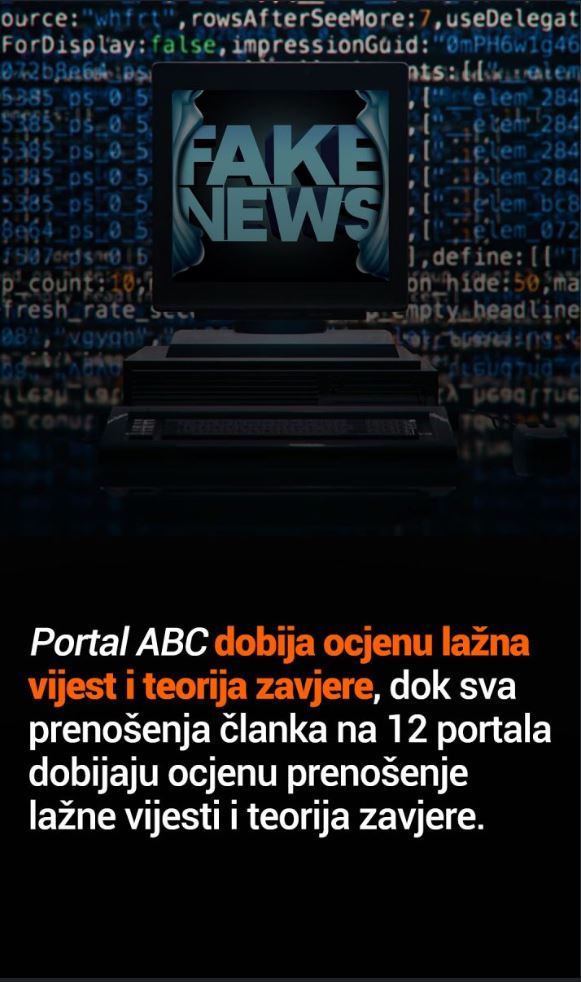 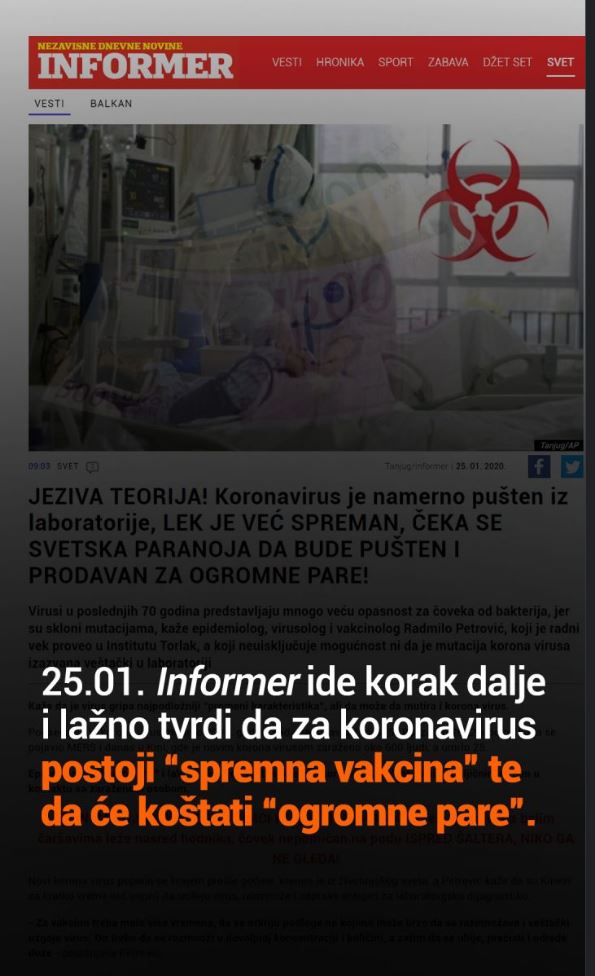 “Everyone loves doing quizzes. When you read an article, you might just remember one piece of information. But when you do a quiz, you get 15 different pieces of information in just one short read. And it’s fun. As well as our Covid-19 quizzes, we have quizzes that grant people the status of ‘fact checker’. We also have a media literacy quiz,” he says.

Zasto Ne have now repackaged 15 reports on the Covid-19 pandemic published onto their website into Instagram stories, which have proved highly popular among their readership.

Brkan and his team have also turned their attention to the more vulnerable and older members of their society, increasingly prey to disinformation about Covid-19. Together with seven fact-checking organisations from throughout the Balkans, they have started a new campaign on the social messaging platform Viber. 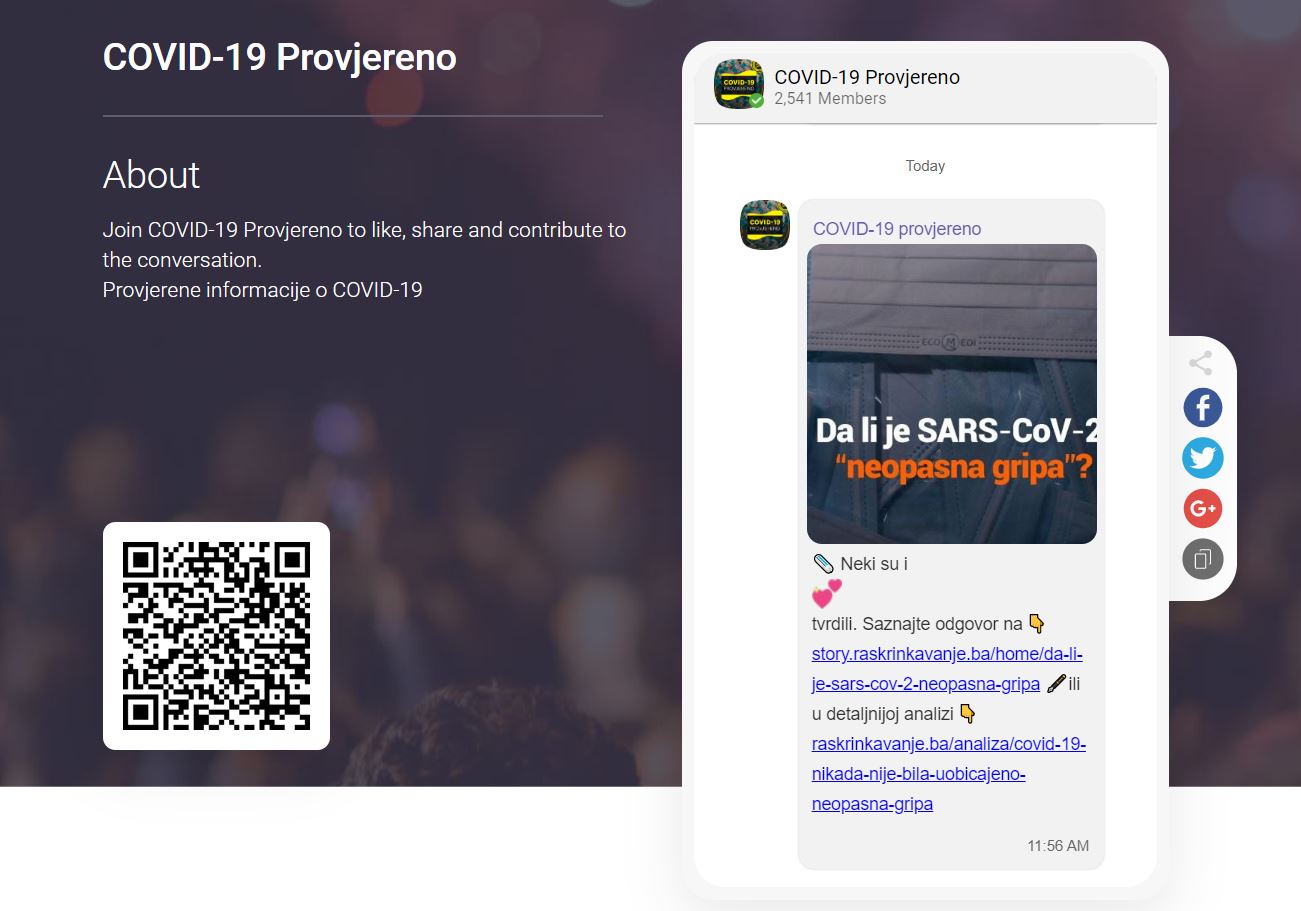 “In the Balkans, most older people are on Viber, and we noticed that a lot of disinformation about the coronavirus was being spread by older people via Viber. We launched this campaign in early April with our partners and there was immediately huge interest with 3,000 people signing up during the first few days,” he says.

These days, like organisations throughout the world, the Zasto Ne team are working from home, with online newsroom meetings each morning and editorial meetings each afternoon. Brkan is focused on media literacy as an important part of his organisation’s work in the immediate future, in addition to their core work of debunking misinformation. Indeed, as he speaks with EED, an online training is ongoing.

When this current crisis is over, Brkan plans to research the data they have collected during this period, as well as opening up the website’s database to other researchers, so that it can serve as an important source of information on the avalanche of disinformation about Covid-19, about how this disinformation was spread and who exactly was behind it.