In the report, Tunisian Human Rights Activist Ramy Khouili and Harvard Human Rights Lawyer Daniel Levine-Spound explore how Article 230, a colonial law criminalising sodomy was incorporated into the 1913 Tunisian penal code. LGBTIQ rights and specifically the repeal of Article 230, were discussed for the first time by presidential candidates during televised debates in Tunisia’s recent election cycle. 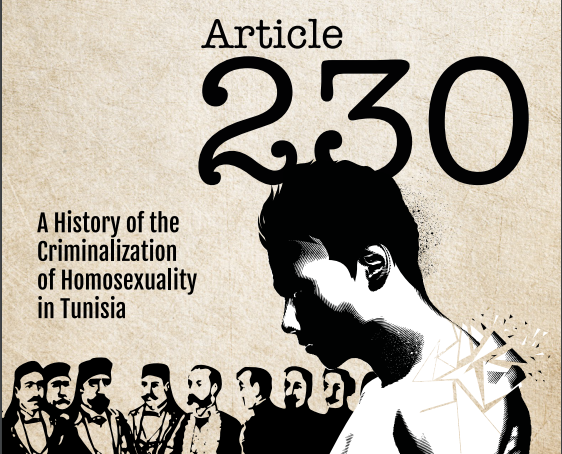 Prior to the French Colonial period, mentions of homosexuality are nowhere to be found in Tunisian criminal law. And yet, Article 230, a law which criminalises sodomy, is included in the 1913 Tunisian penal code and is still actively used by law enforcement in Tunisia as punishment to LGBTIQ people in Tunisia.

Why did the drafters of the 1913 Tunisian Penal Code decide to include a law criminalising sodomy? How did they determine the punishment for violating the law to be a three-year prison sentence? These were some of the very questions that Levine-Spound and Khouili aimed to explore in their EED-supported report “Article 230: A History of Criminalization of Homosexuality in Tunisia”.

In 2015, when Levine-Spound first met Khouli, he was an intern at Euro-Med rights in Tunis. The pair noticed a significant increase in violent police arrests and prosecutions for alleged violations of Article 230, a piece of legislation that had rarely been used previously. One of the most high-profile arrests at this time was of the ‘Kairouan Six’, a group of six men accused of receiving information about homosexuals and using a house in Kairouan for ‘sodomy’. Curious as to where the law originated, the two men consulted legal experts and historians to try to find out more.

Khouili and Levine-Spound then began what Khouili now admits was the tedious process of scouring through mounds of archival documents.

Khouili notes that there is a tendency for the criminalisation of sodomy to be pegged to Shar’ia law, but in their report they explain that the legal influences of Article 230 are unclear.

A surprising find that emerged from their research was that they found the first-ever mention of Article 230 in a handwritten note in the margins of the 1911 preliminary draft of the penal code - unattributed to any members of the eight-member Commission that produced it.

While this Commission included two Shari’a cadis (judges), Mahmoud Ben Mahmoud and Mohamed Kassar, Tunisan legal scholar Rachida Jelassi explained that their presence was most likely a, “question of respecting formalities.'' It is also noteworthy that the Code was drafted in French rather than Arabic, and that the primary source used to produce it was the 1810 French Code, an indication that there was little influence of Shari’a in the drafting process.

A key argument that Levine-Spound and Khouili drive home in their report is that "the absence of explicit references to homosexuality in Tunisian criminal law prior to the French Protectorate, coupled with the fact that the 1913 Tunisian Penal Code largely mirrors the 1810 French Penal Code, lends credence to the idea that Article 230 is a pure product of colonialism, a relic of French rule with little relationship to Tunisia itself."

Khouili believes this report is an important response to conservative voices, “convinced that homosexuality is a Western import and that its criminalisation is anchored in the Tunisian legal system and Tunisian values”.

He believes that the intrinsic value of the report is that it provides LGBTIQ activists with evidence to help them to strengthen their arguments and enhance their advocacy, noting that, “the report contributes to the discussion by showing how the criminalisation of sodomy took place…you cannot decriminalise it unless you deconstruct why it occurred in the first place.”

Article 230 and the 2019 Presidential elections

On 18 September, Tunisians headed to the polls for the first round of voting in the country’s Presidential Elections. The two frontrunning candidates competing in the second round October 13 are law professor Kais Saied and imprisoned media mogul Nabil Karoui.

It is unclear if either candidate is willing to move forward with the repeal of Article 230. Karaoui has previously expressed  that homosexuality, or rather its public expression, is encouraged by foreign parties who finance them noting that, “homosexuals have existed throughout history but some want to spread homosexuality."

During this election period, Tunisia also had its first ever televised debate with eight of the candidates running for Presidency. In the third and final instalment of the debates on 8 September, candidates where questioned on their role as protectors for rights and liberties and several expressed their belief that Article 230 should be repealed. The very notion that issues concerning civil liberties, and particularly Article 230 are now discussed on a televised presidential debate is a sign of progress, according to Khouli.

In the last election cycle in 2014, the question of Article 230 was not even on the table, none of the candidates were being asked questions about it in the media...it was not a priority.

Khouili hopes that incoming presidential candidate will follow up on the recommendations of the Commission des libertés individuelles et de l'égalité (COLIBE) report (in Arabic) produced by the Tunisian Individual Freedoms and Equality Committee last year. He explains that a draft law proposal on individual liberties has already been submitted to parliament by a group of MPs, however it is not a priority on their agenda and the incoming President will be best placed to push for the law to be discussed.

* Ramy Khouili has been previously featured in a #FirstPersonStory available here.