A strategic approach to a democratic future in Belarus 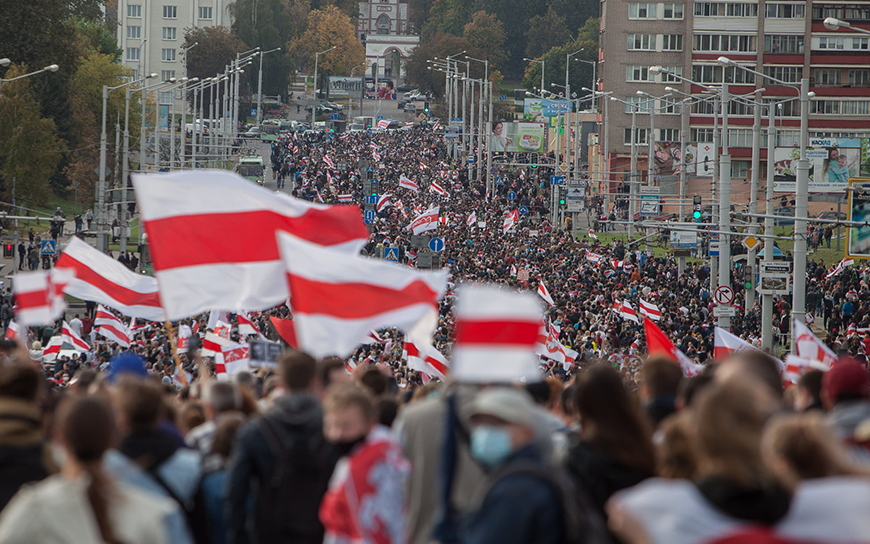 For the moment, Sergey* insists he has no political ambitions. There are enough people in the political opposition, Instead, he wants to focus on the practical things he is good at: political analysis, planning, strategic advice and combatting disinformation. He’d also like to go back to running his business, as he did before the outbreak of war in Ukraine. And he would like to move back home to Belarus.

Sergey is one of the most strategic minds on Belarus, and he and his colleagues are producing high-impact analysis on the wider region that is informing strategy and policy, are building a network of like-minded Belarusians abroad, and are helping to cultivate individuals for who can play a central role in Belarus’s democratic future.

“I realised early on that it was important that the opposition abroad stayed connected with Belarusians at home. People in Belarus are beginning to lose hope of change, with Lukashenka still in power and the collapse of the mass protest movement. There was no clear agenda of what we should do next,” he says, explaining why he set about this work.

A common enemy and a common goal

He relates that there is a significant Belarusian diaspora in Europe and in the USA, including economic migrants who fled the country from the 1990s onwards as well as the recent wave of political dissidents. “We all have a common enemy and a common goal, but there was no clear strategy”, he says. He notes too that many who left the country in the wake of the failure of the mass protest movement are disillusioned and are leaving the field of activism.

“Our main goal as an organisation is to produce high quality analysis about the wider region – so about Belarus, Russia and Ukraine and to show the connections. We want to show that this crisis will not recede unless we act. Our future is at stake and Western partners must understand this,” he says.

“Our political work and the support we give activists in Belarus and abroad is key. We help reveal the regime’s plans, and we advise international politicians and experts on the situation in the country, and we also advise on possible future scenarios. Our objective is to build strategic partnerships between political stakeholders with an interest in Belarus’ democratic future, and thus prevent the ongoing russification of our country,” he says.

He believes that the opposition will never succeed if they do not have a detailed understanding of the Lukashenka regime and of the wider regional issues. “We need to know our enemy, to know who is in charge, and who would take over if he was no longer in control,” he says.

Building a network of democratic allies

Sergey and his colleagues are building new connections between these members of the diaspora, writing policy papers, and analysis, and keeping up connections with those at home. With support for Lukashenka in Belarus still running at around 30 percent, and many stakeholders with a financial interest in the continuation of his regime, he believes that it is important for the opposition to have a playbook for the country’s democratic future. A playbook he calls, “How not to lose a country in 60 days.”

A key part of Sergey’s work is identifying the experts who can build Belarus’s democratic future, when they have that opportunity. “These are not necessarily the people who are prominent now. They are people who would never become part of any official platform, but they want to help build Belarus’s future. We may have lost for the moment, but the war in Ukraine has given us all hope. We have a chance now and we must use it,” he says.

EED is funding the ongoing costs of this initiative.

*This grantee’s name has been anonymised to protect their identity