‘Work and Rest programme’: providing essential respite for Ukrainian journalists and activists at the frontline in the information war 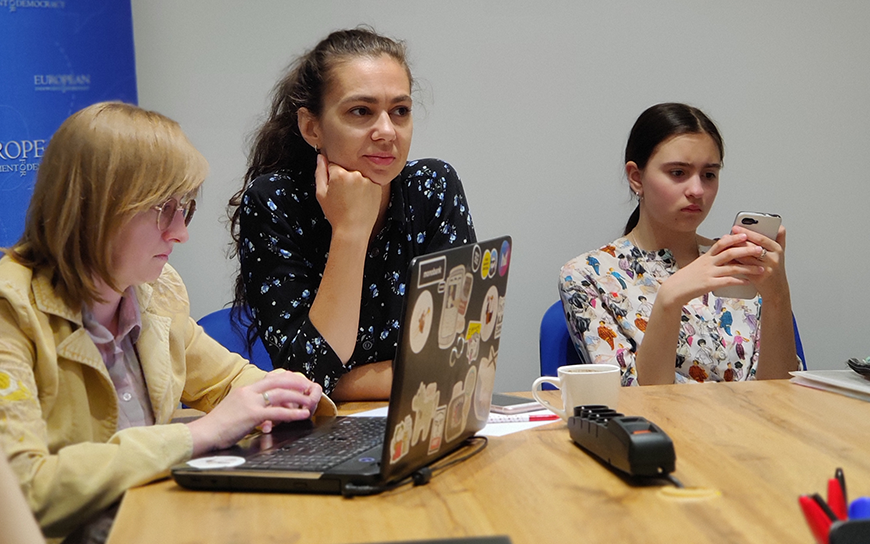 “The residency programme helped me come back to the world. I wrote my first articles since the war there,” says journalist Iryna Chyshko, in interview with EED, about the first ‘Work and Rest’ programme’ at the EED Centre for Ukrainian Activists (CUA) this May.

Iryna’s first article written in Przemyśl recounted the experiences of a young couple who lived in Mariupol under siege and their escape from the city. Written under a pseudonym, the article had more than 42,000 views. Iryna herself fled Mariupol by foot three weeks after the Russian invasion began.

Iryna’s sentiment is echoed by the other 11 participants of this first month-long residency programme run by the Lviv Media Forum NGO in Przemyśl on the Polish-Ukrainian border in partnership with EED. They saw this programme as a chance to meet journalist colleagues at a time when many are separated from colleagues and friends, and to remove themselves, temporarily at least, from the daily stresses of war-scarred lives. 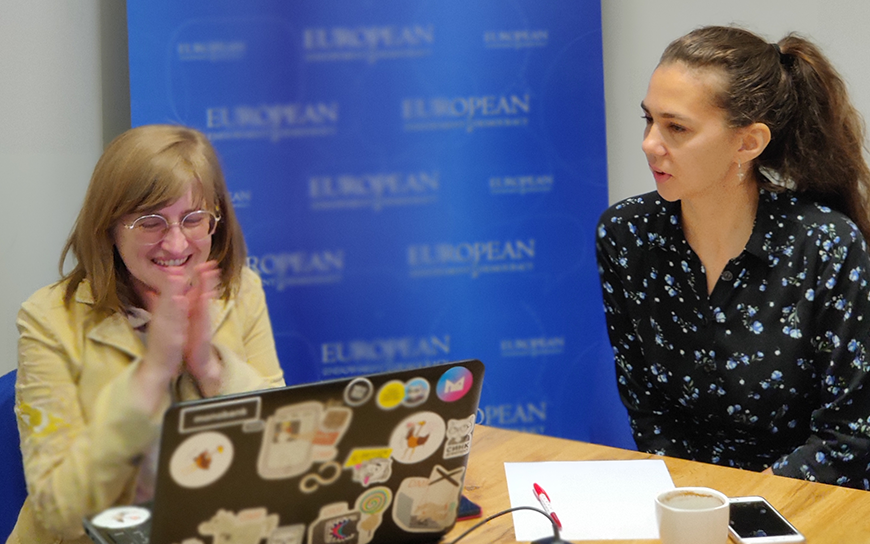 Designed to be adapted to participants’ needs, the programme provides a range of training sessions, including on physical and digital security, grant applications, fundraising and multimedia content development. It includes mentorship, psychological support, training, as well as cultural visits. All sessions are delivered by skilled trainers, who keep a constant eye on the wellbeing of the participants as a key focus is to help journalists digest the psychological stresses of these weeks of war.

Participation in all parts of the programme is voluntary, and the sessions are held at times that suit the journalists, all of whom continue to work throughout the residency. For many of the first cohort, like Iryna, these are weeks of a creative reawakening. They can work at home or in the well-equipped CUA centre. Andrii Klymenko from the Black Sea News outlet noted that during the four weeks of the residency, he and his colleague gave 35 live interviews and carried out five briefings and consultancies.

Trips are also organised during the residency, including to places of cultural interest and to Polish media outlets, and to the office of Gazeta Wyborcza in Warsaw. 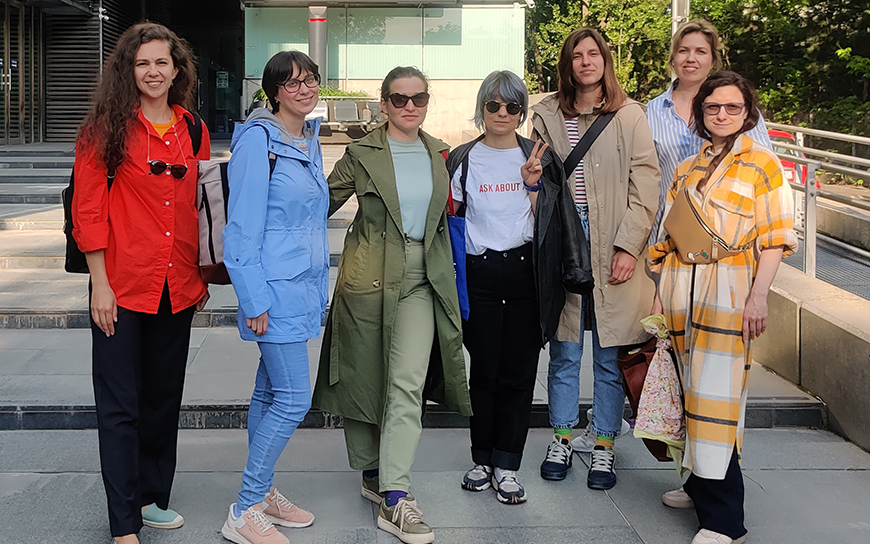 A lifeline for journalists at this time of work

The programme offers an important lifeline for journalists who had little or no previous experience of war-reporting prior to the 24th February, and have been forcibly uprooted from their homes and their communities, both personal and professional. Many are now experiencing precarious living conditions. The residency offers them breathing space to help them reset their personal and professional lives.

Kseniya Minchuk, who produces podcasts for former EED partner Hromadske Radio, fled Kryvyi Rih in central Ukraine on 1st March and is now living with her son in Poland. “I had nowhere to live when I started the residency,” she says. “I brought my son along. The residency was a chance for me to get away and to relax, as well as to learn. I learned techniques from the psychologists to manage stress.”

For Hanna Starkova, a journalist from Censor.net, this psychological support aspect of the programme was vital. “I knew I needed counselling and this was a good way to start. It’s difficult to process all that has happened. The residency gave me the chance to switch off and look after my mental health. As it was held in Poland, I was able to remove myself physically and mentally from the constant strain of being in Ukraine. I felt I could talk to people more freely,” she says. 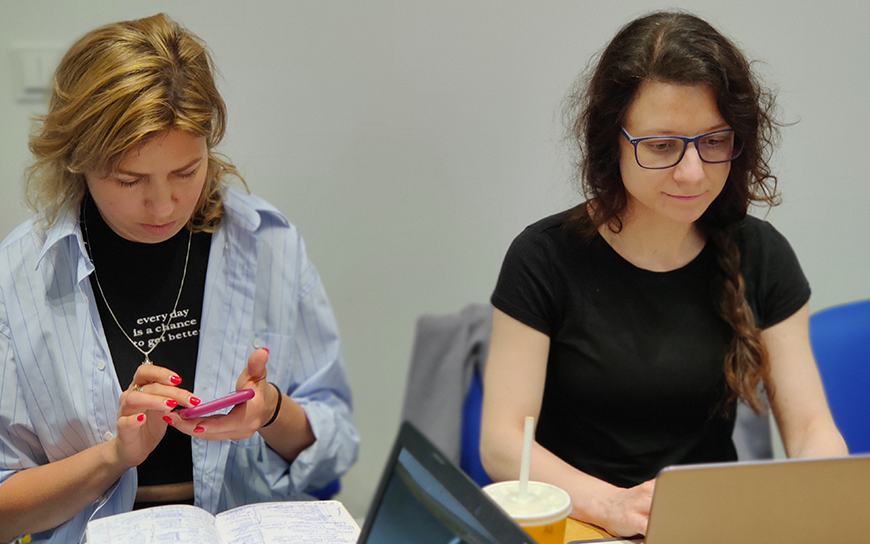 The highpoint of the residency for most of the attendees was meeting with other journalists, comparing experiences and learning from them. Kseniya explains that since she moved to Poland, she has had little contact with anyone but her son. “It was like a balm to my soul to meet other professionals who share my interests and to hear their stories,” she says.

This is a point Hanna and Iryna also emphasise. “I met journalists from various Ukrainian media. Talking with them, I understood that we are all addressing this war, maybe from different points of view, but we all have the same task. This programme helped to confirm my belief that we can do this job together. We are stronger together,” says Hanna.

This June, the CUA began its second residency, with more planned over the coming months, and activists also taking part. For the moment it is mostly only women who can attend, as most men between the ages of 18 to 60 cannot leave Ukraine. The plan is that the residency can help these journalists, “stay strong and work,” as Kseniya puts it, for “the information war is our frontline.”

This article reflects the views of the grantees featured and does not necessarily represent the official opinion of the European Endowment for Democracy, the European Commission or any other European State or other contributors to EED.